Hizbullah Sectary General His Eminence Sayyed Hassan Nasrallah Chief revealed that the Islamic Resistance has all kinds of weapons, that the "Israeli" may or may not think of."

And in a strong warning to the "Israeli" enemy, Sayyed Nasrallah sent a clear message, "we are ready to liberate Galilee and what is beyond the Galilee."

His Eminence's declaration came in a long interview with al-Maydeen channel, conducted by its director Ghassan Ben Jeddo.
In the interview that lasted for three hours, the Resistance Leader pointed out to important positions, and provided important data, specifically in the conflict between the resistance and "Israel". 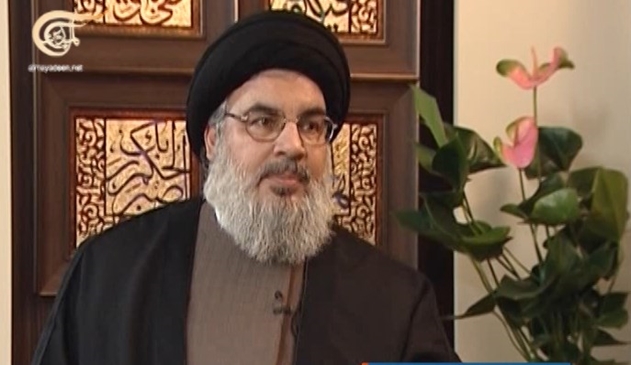 "We have had the Fateh-110 missile since 2006 and it has become outdated compared to what we have now," said His Eminence.

"What the resistance has in its possession qualifies it for engaging in any confrontation that the "Israelis" might think of," he added.

Warning Tel Aviv, the Resistance leader highlighted that the Zionist entity would be totally mistaken if it was betting that "the resistance has weakened" or that its "capabilities, readiness, assets and determination have waned" due to participation in the Syrian war.

"It will find out that counting on these calculations will lead to foolishness rather than a major mistake," Sayyed Nasrallah emphasized.

He pointed out, however, that "the "Israelis" are currently incapable of achieving a decisive and clear victory in any possible war on Lebanon."
Noting that the Resistance does not want a war and that "it is not seeking it," His Eminence underlined that his group maintains its "preparedness."

"Anything that we might be obliged to do in any future war ... anything that might be needed to win the coming war; we must be ready and prepared for it. The Resistance's military fronts must be ready," added his Eminence.
In parallel, Sayyed Nasrallah a grave warning to "Israel", by addressing the Resistance men: "When the leadership of the resistance asks you to enter into the Galilee, this means the resistance must be ready to enter into the Galilee and areas beyond Galilee."

He also noted that Hizbullah men stand ready to liberate the northern Occupied Palestinian region in any future confrontation.
"As a resistance, we are stronger than ever, and God willing we will become stronger than we are now," he added.
He said that Hizbullah has "all sorts of arms that can come to mind."

On another level, Sayyed Nasrallah discussed some aspects of the discovery of "Israeli" agents within Hizbullah ranks. In parallel, he corrected a lot of false rumors and leaks that have accompanied this case.
Separately, he confirmed that one of the party's officials busted five months ago was found to be working with "Israeli" and US intelligence.

However, Sayyed Nasrallah said the official's importance and status had been exaggerated by the media, adding that he did not hold a very high rank.
"He confessed to everything and to what extent he collaborated with "Israel"," he said.
"After 32 years of resistance ... and with the expansion of Hizbullah's structure horizontally and vertically, this is normal," he said.

"We should not treat it as normal, but it is."

His Eminence also spoke about the situation in Syria, Iraq, and Saudi Arabia, Iran and Bahrain.

"The recurrent strikes on various targets inside Syria are a major violation, and we consider any strike on targets in Syria as an attack against the entire axis of resistance, not only against Syria."

Asked whether the axis of resistance might take a decision to retaliate against "Israel's" raids, His Eminence clarified, "Yes, such a decision could be taken ... This axis has the ability to respond."
"This is something open that might happen at any given time," he added.
Sayyed Nasrallah noted that "no one has given a commitment that the attacks against Syria will remain without a response."

"This is the right of the axis of resistance and it is not Syria's right exclusively," he added.
"When will this right be practiced? This depends on certain criterion that will be taken into consideration," he explained.

In response to a question, the Secretary-General underlined that Hizbullah "does not have resistance formations" at the Syrian Golan Heights that are occupied by "Israel".
"We're ready to offer help and assistance, but the issue has not been raised until the moment," he added.

As for Hizbullah's relations with the Palestinian groups, Sayyed Nasrallah elaborated "there might come a day when all resistance movements fight together against the enemy and we want strategic relations with everyone, topped by Hamas and the Islamic Jihad."

Asked about the relation with Hamas, Sayyed Nasrallah mentioned: "The Palestinian group had demonstrated a will to strengthen its bonds with Iran and Hizbullah."

On another level, His Eminence refused any claim that the resistance members were "exhausted" in Syria.

"Contrary to what the enemy thinks," Sayyed Nasrallah warned, "the resistance is fully ready in southern [Lebanon], and is ready to face any possibility."

No Solution without Al-Assad

On the Syrian political front, Hizbullah's Secretary-General stressed that "the notion that the Syrian regime can be ousted militarily has ended."

"The Syrian armed groups that are linked to the so-called Coalition or Saudi Arabia are on the path of demise," he noted, emphasizing that "any solution in Syria would be impossible without President Bashar al-Assad."

Saudi Arabia's role in Syria has dwarfed with the rise of "ISIL" and the Nusra Front, Nasrallah added, saying that the two factions became too strong to handle and now threaten the kingdom.

He said Turkey had strong military bonds with "ISIL", and if it decides to take the political solution route, the conflict would be easier to resolve.

His Eminence revealed that he has met top Syrian opposition official Haytham Manna in a bid to help end the four-year-old war in neighboring Syria.
"I had already met, besides Syrian dissident Haytham Manna, a number of other opposition [officials] in an effort to contribute to a political solution to the Syrian crisis," Sayyed Nasrallah said.

His Eminence revealed that a certain country involved in the Syria crisis has informed Russia of its readiness to accept any deal to end the conflict, "including the survival of the regime," provided that Syrian President Bashar Assad is removed from power."

That country does not mind that al-Assad be succeeded by a new president from the same Alawite sect.

"The dialogue has so far limited sectarian tension," His Eminence said. Its results appeared following the suicide bombing that rocked the northern city of Tripoli over the weekend.

"All parties exercised a high level of self-restraint," he said, adding "had there not been for the dialogue, the reaction would have been different."
"Imagine if the two aggressive suicide bombings against our people in Jabal Mohsen happened during a different climate," he said.

"Tripoli and the region would have been set ablaze."

"Our experience with the Progressive Socialist Party is not bad and it succeeds; we cooperate in Lebanon but disagree on Syria," he said, hinting the same could be done with the Future Movement.

Hizbullah Secretary General reiterated his support for his ally Free Patriotic Movement leader MP Michel Aoun, saying he should be Lebanon's next president.
Any talk on the presidential election must be with the general [Aoun]," Sayyed Nasrallah stressed. 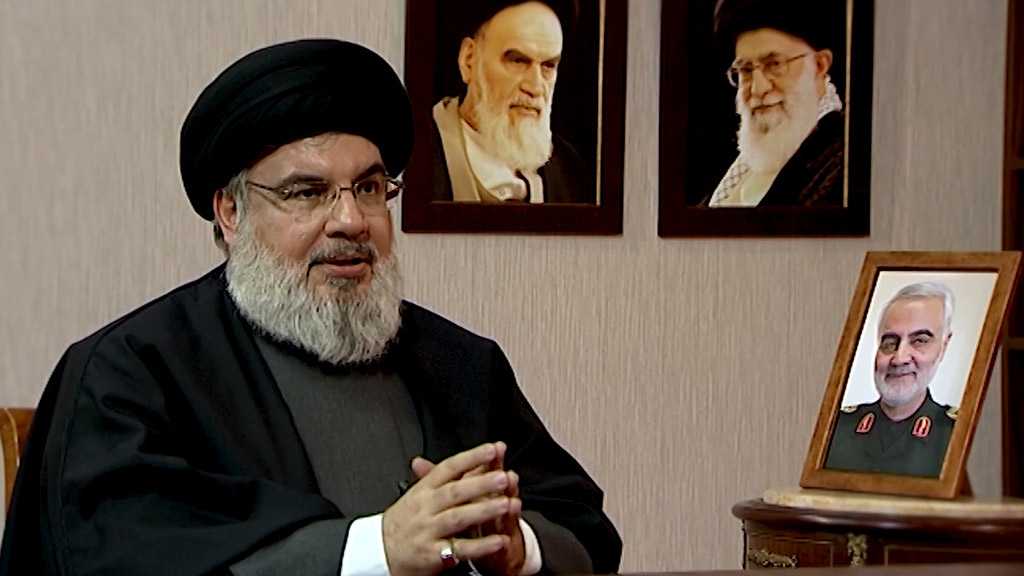 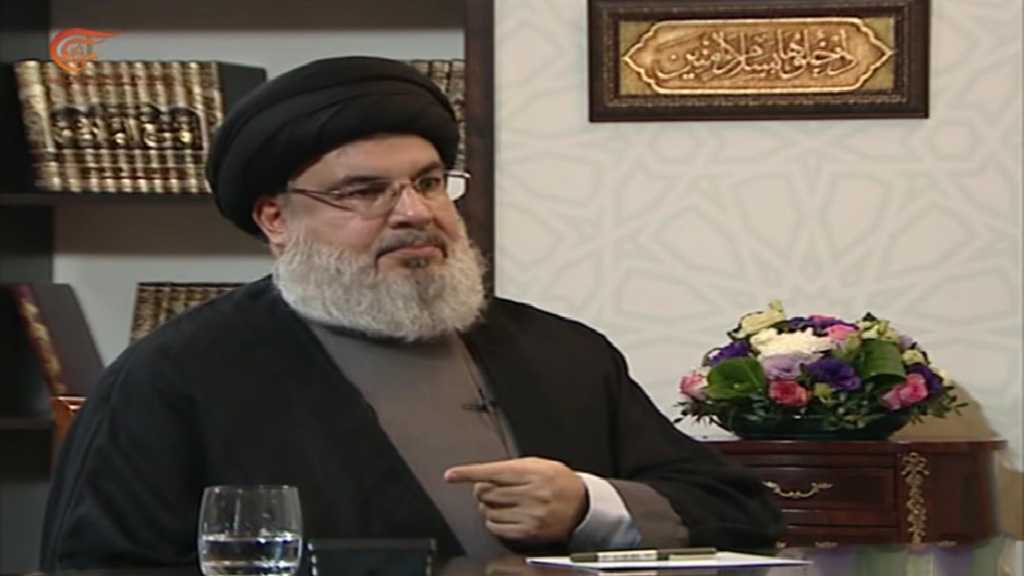