Hizbullah Secretary General His Eminence Sayyed Hassan Nasrallah delivered on Tuesday a speech in which he tackled various topics.

Speaking via a television screen to Hundreds of thousands of people , who were commemorating the tenth day of Muharram in Beirut's Dahyieh [Southern Suburbs], he thanked the huge crowds for their great presence on Ashoura ceremonies despite challenges, security concerns, and rain.

"These great scenes for tens of millions commemorating the martyrdom of Imam Hussein all over the Islamic world, and condoling the Great Prophet[Mohammad] reflects the greatness of this martyr."

Sayyed Nasrallah further added:" [Imam]Hussein is greatly present today as if he was martyred yesterday."

Nothing to Stand between Imam Hussein, Followers 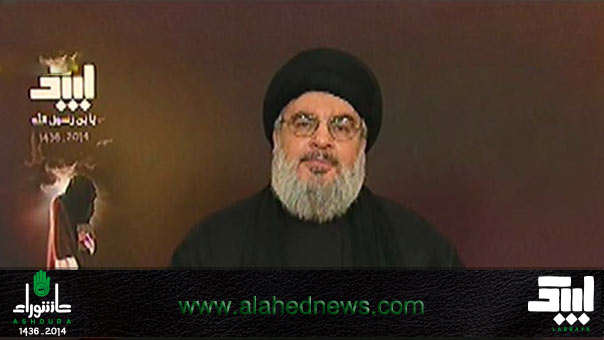 Commenting on the attacks that targeted the Husseini gatherings in Nigeria, Ehsa province in the KSA, Pakistan, and Iraq, he viewed that such aggressions "are signs that the aggressors are violent , weak, and ignorant."

"We are adamant to confront those who launch war on us. Neither killing nor suicide bombs and shelling will stand between Imam Hussein and his followers. We will always respond with reiterating our pledge to Imam Hussein: Disgrace How Remote," His Eminence vowed.

Moving to the recent Zionist violations against the Holy al-Aqsa mosque and their attempts to judize this site, the Resistance leader mentioned that "the "Israelis" are getting advantage of the Islamic world's turmoil to reach their objectives."

"Today, if one stands to talk about dangers facing al-Aqsa Holy mosque, he would be right. This is not an exaggeration. This Holy place is really facing real and serious dangers. The Muslims must be aware of this calamity," he mentioned.
In parallel, His Eminence warned that "al-Aqsa Mosque is in real danger as the Zionist entity is going on with Judization, settlements building and expelling the Palestinian from their land."

"Despite of all our disputes, all Muslim scholars must launch a historic and firm position to save al-Quds and al-Aqsa," Sayyed Nasrallah emphasized, urging the Arab League to take a decisive stance from the "Israeli" attack on al-Aqsa.

To "Israelis": Fear Us

Concerning the continuous "Israeli" threats and talk about a third war with Lebanon, especially after the latest aggression against Gaza, Sayyed Nasrallah said: "This doesn't stem from power, but from the "Israeli" fear."

"They think that the evolution of the events will weaken the resistance and affect its readiness. They ["Israelis"] are collecting information and data that do not rely on what is written in some Lebanese newspapers and Arab media that Hizbullah began to get weak."

He said "Israel" knew very well that Hizbullah was never distracted from eyeing Lebanon's southern border contrary to what he said were Lebanese and Arab media reports that the Syrian conflict had exhausted the resistance's capabilities.

"They ["Israelis"] know that going to war with the resistance will be very costly because we are more determined, stronger, more experienced ... and we are capable of achieving such accomplishments."

In response, Sayyed Nasrallah assured that "the resistance is fully ready in Southern Lebanon despite the presence of the dear resistance in Syria."
"All what we have heard from the "Israeli" since the end of Gaza war till today , does not weaken us but reveals the enemy's concerns."

He recalled the recent "Israeli" fears stated by a senior officer who said that "in case of a new war with Lebanon, Ben Gurion Airport will be closed from day one."
To the "Israelis", Sayyed Nasrallah said: In case of war, "you must close your airports and ports. You will not find a place all along Occupied Palestine that the Lebanese resistance's rockets won't reach."

""Israelis" can't launch war against Lebanon because they know that the resistance is always on alert and fully ready to fight," His Eminence highlighted, noting that "the resistance today is more powerful and determined to fight the enemy."

Takfiris to Be Defeated

On the recent events in Syria, Sayyed Nasrallah mentioned: "The Syrian army and its allies had the upper hand in the Qalamoun battle and that the party was proud to be part of the battle to protect the region from the Takfiri threat."

He also described the talks of Hizbullah's withdrawal from Syria "as mere dreams."
"The developments in Syria and the region make us more convinced that we have made right choices," he added, and pointed out that " We are part of the confrontation against the biggest danger facing the region. We have the honor to be part of the victory that will be achieved. Takfiris have no future and their plan has no life."

"The goal of the enemy wasn't only limited to control a certain city, but all of Syria. The whole world had agreed to topple the Syrian government within months, however nearly four years have passed and Damascus is still firm to the current day and Syria did not fall," His Eminence asserted.

"The goal of the Takfiris was to control Syria and eliminate all communities of other religions and Muslim sects and even those in the Sunni community who do not agree with their viewpoint," the Resistance Leader said. "Syria was waiting to face what is happening from massacres in Mosul and Anbar ... As we enter the fourth year of the Syrian conflict, the Takfiris have not yet been able to control Syria."

"Many Syrians remain safe in their villages. Isn't that a great victory, a great achievement?"

In addition, Sayyed Nasrallah predicted that "the Takfiris have no future, they will be defeated and we will receive the honor of defeating them."