The head of the Islamic Shura Council in Iran, Ali Larijani, described Hizbullah's victory in the 33-day war as a great achievement in Lebanon and the region. 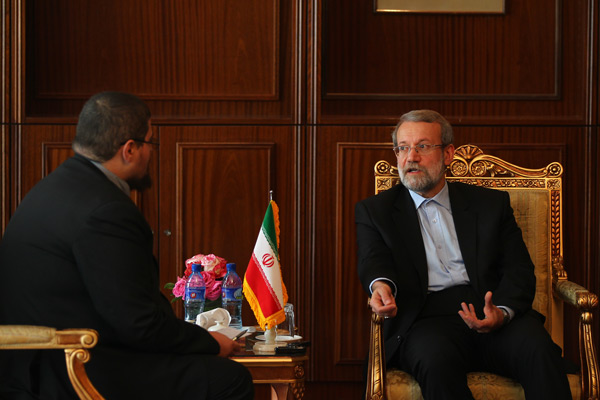 In an interview with al-Ahed news, the top Iranian official stressed that the resistance represents a major capitalization for the Lebanese people.

"The style of Hizbullah's defense against the "Israeli" aggression and its special administration of the 2006 war has created a unique event that led to a change in the regional equations," he added.

In parallel, Larijani pointed out that "For decades, "Israel" has been trying to become the only force in the region, but it has failed."

"The only force that can stand today in face of "Israel" is that of the resistance which can change the equations, and not the international statements and regional positions that emerge every now and then."

According to the Iranian official, "The only thing that can modify the balance of power amid the current circumstances is the strength of the resistance and its ability to withstand and deter with high spirit."

"This was clear all through the 22-day, 8-day, and the recent war in Gaza."
Larijani also revealed that in one of his visits to Europe during the 2006 "Israeli" aggression against Lebanon, a European told him: "The [ex-"Israeli" PM]Olmert looked like a lifeless body."

"All the "Israeli" attempts to become the largest force in the region sputtered and turned against them. "

As Larijani stressed the need to retain the vivid experiences of the resistance and to benefit and support them, he reiterated that "the victory of the Islamic Resistance in the July 2006 war represents a major achievement in the region and Lebanon."

"It is true that Lebanon is a small country but it triumphed while many of the major countries could not achieve such a victory. Therefore, the resistance represents a capitalization for the great Lebanese people."