The head of the Palestinian delegation to Canberra warned Friday that Australia could face trade sanctions by Arab nations over its decision to stop using the term "occupied" when referring to Occupied East al-Quds. 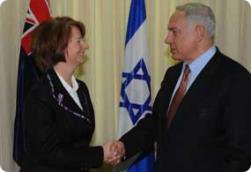 Izzat Abdulhadi said Australia's new stance on East al-Quds was a "substantial policy shift."
"We think that it's very provocative and un-useful, and it's not appropriate," Abdulhadi stated.

His comments came after 18 diplomats from countries including Indonesia, Egypt and Saudi Arabia protested to Australia's Department of Foreign Affairs in Canberra on Thursday.

Australia said last week it would no longer refer to East al-Quds as "occupied", claiming that "the term carries pejorative implications and was neither appropriate or useful".
"It is important, as far as you can, not to use loaded terms, not to use pejorative terms, not to use terms which suggest that matters have been prejudged and that is a freighted term," Prime Minister Tony Abbott said.

The comments sparked fury in the Arab world, with the Jordanian and Palestinian governments summoning Australia's diplomatic representative in protest.

In a letter sent to Australian Foreign Minister Julie Bishop, Palestinian Chief Negotiator Saeb Erekat said the Palestinians view this decision "in the gravest terms," and accused Australia of not recognizing the illegality of "Israel's" settlements policy.
Erekat said the term "occupation" is not judgmental, but a recognition of the "legal fact" that "Israel" occupies the Palestinian territories, as affirmed by a UN resolution.

Erekat said Australia's refusal to use the term "occupation" with regards to East al-Quds is the latest in a pattern of behavior which shows Australia "has no interest in complying with its duty under international law not to recognize the illegal "Israeli" settlement regime in Palestinian territory."
For its part, the Zionist entity hailed the move as "refreshing."
"We asked the government to reverse this position," Abdulhadi said of the diplomatic protest.

He added that trade sanctions could be put in place against Canberra if the government persisted with its stance, which he said left Australia isolated.
"It depends on the reaction of the Australian government," he said, adding that the issue could also be taken to the United Nations General Assembly.
"Unfortunately I think there will be negative consequences for the Australian government."
Australia's export trade with the Middle East is significant, accounting for billions of dollars annually, particularly in wheat and meat, with Qatar and Jordan major markets for live sheep.

"We want to maintain the trade and we will work very hard with them to ensure that that happens," Australian Deputy Prime Minister Warren Truss told reporters on Friday.
Abdulhadi said he would meet Foreign Minister Julie Bishop next week and was hopeful that Australia could explain the decision.
"Maybe we can avoid all this sort of thing if we can have good discussions," he said.

A Department of Foreign Affairs and Trade spokesperson said officials at Thursday's meeting of diplomatic officials had agreed to maintain an "open dialogue" on the issue.