Al-Akhbar editor-in-chief Ibrahim al-Amin appeared briefly before the Special Tribunal for Lebanon[STL] by video-link Thursday where he told the court he does not recognize its legitimacy and excused himself. 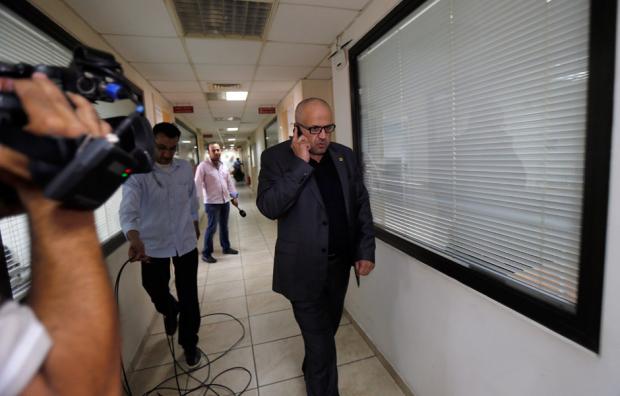 "I reiterate today that I do not acknowledge the legitimacy of this tribunal. It was created by the United Nations Security Council [UNSC], which has never guaranteed the security of any country, secretly and in violation of Lebanese sovereignty," Amin told the the Hague-based court, ostensibly set up to investigate the 2005 assassination of former premier Rafik Hariri.
"The UNSC has never set up an international tribunal to prosecute Zionist war criminals," Amin said during a preliminary hearing into charges related to Al-Akhbar's publication of a secret witness list.

He further added: "The security council established this tribunal as a political tool. I would like to remind you that shortly after the establishment of this tribunal "Israel" committed a massacre resulting in the deaths of 1,300 Lebanese in July 2006," and no investigation was launched into that assault.

After Amin finished his statement, the contempt judge Nicola Lettieri said he will interpret his remarks as a not guilty plea, to which Amin responded: "I do not recognize the existence of this tribunal so I cannot allow it entitlement to charge me."

"I would like to inform you that I will remain silent during all the proceedings and refuse to appoint any lawyer to represent me or al-Akhbar, and I refuse that you appoint a lawyer to defend me or the company.

Amin then asked the judge if he was free to leave. Judge Lettiery affirmed that Amin was free to do as he pleased, after which he removed his headset and left his computer.
"We can at least say goodbye," the slightly startled judge said after Amin had already disappeared from the screen. Lettieri then adjourned the session.


Amin later asked for the judge to publicly apologize for cutting him off while he delivered his statement.
In a press conference, Amin stated: "We realized that there was a lot of ambiguity regarding the charges against me and in the trial procedures. We demanded clarifications but we didn't get any."
"We were surprised that the judge wanted me to say that I understood the charges against me even though I said they were ambiguous. He insisted that I answer if I'm guilty or not, even though I don't even understand the charges," Amin added.
The judge interrupted Amin after he noted that many of STL's backers are the same "killers and criminals" linked to the recent wave of car bombings in Lebanon targeting Shia neighborhoods because of their perceived support for Hizbullah.


The judge told him such remarks were not relevant to the STL case.
"Unless the judge publicly apologizes for [cutting me off] and provides me with a full range of guarantees, I will not attend the trials," Amin said. "The court is of no interest to me anymore and refuse any decision issued by it."
By guarantees, Amin was referring to his request earlier this week that the STL provides assurances that neither he, his family or colleagues at Al-Akhbar would be put in danger by the court's indictment against him and the paper.


The STL has come under fire by media rights groups after announcing last month that it charged Amin, deputy director of al-Jadeed TV Kharma Khayat, and their news organizations with two counts of obstruction of justice and contempt.
Prosecutors accuse the journalists of "knowingly and willfully interfering with the administration of justice" by publishing secret information about STL witnesses.
If found guilty, Amin and Khayat could face up to seven years in prison and a 100,000 euro fine.
Amin is shown in an image grab from a live stream of the STL session.
Judge Lettieri had pushed Amin's appearance before the court, originally set for May 13, to May 29 after the newspaper chief asked for more time to assemble a defense team.
But the judge denied Amin's request earlier this week for another postponement.


"I stand today a little over 100 kilometers from a land called Palestine. Palestinians are the only people on the face of earth who are not granted basic rights including entitlement to self-determination," Amin told the judge during Thursday's brief session.
"Crimes against Palestinians continue to get committed amid international silence as the UNSC never made a single move regarding this issue and did not set up international tribunals to prosecute the atrocities practiced by Zionists. Consequently, how is it possible for downtrodden people to trust this council and its decisions?"

The charges against Amin and al-Akhbar relate to the paper's decision in January 2013 to publish the names of 32 witnesses belonging to the STL's prosecution.
Khayat and al-Jadeed were charged over the broadcasting of reports in August 2012 on potential STL witnesses.