"Israeli" War Official Amos Gilad warned that the Islamic Republic warned that "Iran can break out to nuclear weapons very quickly, and "Israel" must maintain operational readiness for any threat that may arise." 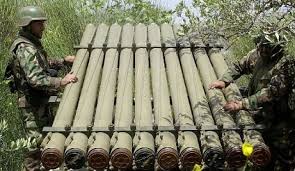 The Director of the political-military affairs at the "Israeli" War Ministry said the security forecast was not sunny. "Today is a pleasant day. But there are clouds, and a storm, on the horizon. People don't believe it until it comes," he added.

He also accused Tehran of spending billions of dollars to build up Hizbullah's firepower, which threatens all of the Zionist entity's territory.

"This is a military threat, not a terrorist one," Gilad said.
Speaking at a security conference organized by the "Israel" War publication and the "Israel" Artillery Association, the "Israeli" top official said: "said that Iran's nuclear weapons program remains the top threat to "Israeli" security, as the Islamic Republic threatens to exterminate "Israel"."

"Iran's strategy is based on the twin goals of getting rid of choking international sanctions, and keeping the option of breaking out to nuclear weapons within a few months. President Barack Obama keeps saying, and I think he means it, we won't tolerate Iran with nuclear weapons," he said.

Gilad noted that Iran has overseen the construction of Hizbullah's arsenal of 100,000 rockets, and spent billions of dollars to build up Hizbullah's firepower, which threatens all of "Israel's" territory. This is a military threat, not a terrorist one," he said, adding, ""Israel" has not been successful in preventing a buildup of rockets in Lebanon."

In Syria, Gilad claimed that "two terror groups without limits were operating over the northern border, and include 1500 European or foreign passport holders fighting."