Extremist insurgents in Syria said they cut down a 150-year-old oak tree in Atme which lies on Syria's border with Turkey, after they accused locals of worshipping it.
"Thank God almighty, the tree... aged more than 150 years has been removed, after people were worshipping it instead of God," said the pro-militant source on Thursday via his Twitter account named "our call is our jihad". 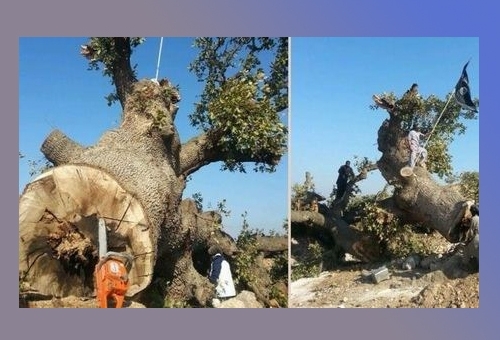 The account also posted pictures of a man in a black mask using an electric saw to cut down the tree. A black al-Qaeda-style flag bearing the "Islamic profession of faith" had been planted on top of the tree.

The militant used the hashtag used by supporters of the jihadist Islamic State of Iraq and the Levant (ISIL).
When militants took over the shrine, they prevented people from going to pray there.

Rami Abdel Rahman of the Syrian Observatory for Human Rights confirmed the tree had been cut down, adding that it stood next to an ancient shrine in Atme.