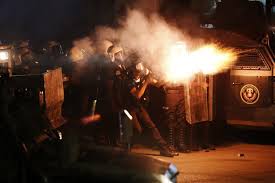 Thousands of people angry over the death of a 22-year-old demonstrator in southern Turkey on Monday clashed with police in Istanbul, the capital Ankara, the western city of Izmir as well as in the southern cities of Mersin and Atakya.

In Istanbul, the Turkish commercial hub where an unprecedented wave of anti-government protests erupted in June, around a thousand protesters clashed with police who fired tear gas and water canon, the CNN-Turk television channel reported.
Several protesters were hurt and around 20 were arrested during the demonstrations in Kadikoy Square, it said.

In Izmir, a large city in the west, more than 2,500 people marched through the city center in defiance of police who fired tear gas, the newspaper Hurriyet said.
It said the crowd shouted "AKP murderer," denouncing the governing Islamic-rooted Justice and Development Party [AKP].

Similar clashes occurred in Ankara, Mersin and in Antakya, the city in southern Turkey near the Syrian border where Ahmet Atakan, 22, died Monday night.
Atakan died in hospital after being hit in the head by a tear gas canister during clashes between police and around 150 protesters, Dogan news agency said.
Local officials disputed that account, saying Atakan had died after falling from a rooftop where he had been throwing stones at police.

In a statement, the police also said the youngster had died in a fall.

His death is the sixth recorded in protests since demonstrations against the government of Prime Minister Recep Tayyip Erdogan, seen as increasingly authoritarian, began in June.