Syrian President Bashar al-Assad said that what is happening in Egypt is the fall of so-called "political" Brotherhood. 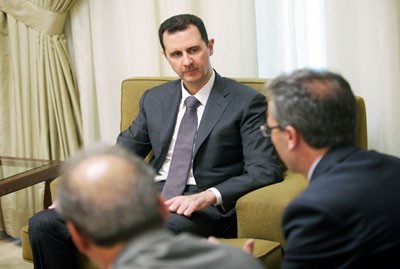 He further stated that "those who use religion for political interests or for the interests of one group will fall anywhere in the world."
In an interview given to al-Thawra newspaper, al-Assad said, "You cannot deceive everyone all the time, particularly the Egyptian people who have a civilization dating back to thousands of years and clear pan-Arab nationalist thought."

The Syrian President added that after a year the image has become clear for the Egyptian people and the performance of the Muslim Brotherhood helped them uncover the lies made by the Brotherhood in the beginning of the popular revolution in Egypt."
Al-Assad said the experiment of the Muslim Brotherhood's rule failed even before it started because this kind of rule is not consistent with the nature of the people and the project of the brotherhood is hypocritical that actually aims at creating sedition in the Arab world.

In parallel, he confirmed that "sedition cannot last in societies that possess knowledge."
"This is why from the beginning I said their project is a failure before it began and this is what made the Muslim Brotherhood's experiment fall quickly because it is wrong, and what is built on a wrong principle will definitely fall," al-Assad mentioned.

Moreover, the Syrian President highlighted that "Syria is the strategic and geographical depth of the resistance, particularly the relation with the Lebanese resistance."

"The conspirators against Syria used all their moral, physical, and psychological tools and can do nothing more than direct intervention ," he clarified, vowing that they won't achieve their goal.
He also described "terrorism" his country is facing as cancer that "must be eradicated before spreading in the body."