After midnight on Monday, clashes between Tripoli's Bab al-Tebbaneh and Jabal Mohsen intensified. 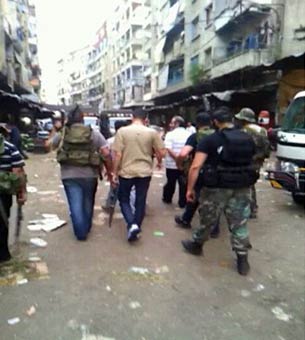 Lebanese as-Safir daily pointed out that the scope of clashes widened, where machine guns and rocket-propelled grenades were used.
At least two people were killed and 30 wounded in the gun battles in the northern Lebanese city of Tripoli, a security source told AFP on Sunday.

The victims were identified as 22-year-old Mohammed Youssef, from the Jabal Mohsen area, and a 13-year-old boy Abed Fares from the neighboring Bab al-Tebbaneh.
According to the Lebanese National News Agency, Lebanese Army spread out in the area of clashes, responding to the sources of fire in an attempt to restore tranquility.

A statement issued by the Army Command said an officer and a soldier were wounded in the clashes and that army units were intensifying measures and deployment to restore normalcy in the city.
Anonymous people extensively shot a cellular shop for the Alawite Mahmoud Khodor in Tripoli.

The National News Agency said the violence broke out after a dispute between young men erupted into an exchange of gunfire and sniper activity.
Clashes between Bab al-Tebbaneh and Jabal Mohsen regularly break out from time to time as tension is Syria rises.