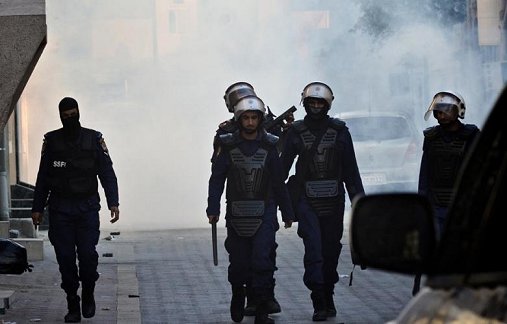 Ali Abdullah Hassan al-Singace and Abdul Aziz Hussein, who were sentenced by a special Bahraini court in May last year, will now be jailed for life.
The court reduced the terms of four others held over the same case from life imprisonment to 15 years in jail, the lawyers said. A seventh defendant, whose sentence was also commuted to 15 years behind bars, remains at large.
The group was accused under the pretext of running over two policemen, during the uprising in the kingdom ruled by al-Khalifa dynasty.

The national safety court's verdict the next month drew international condemnation, with Amnesty International urging Bahrain to scrap the executions.
The court was set up under a state of national safety, a lower level of emergency law declared by King Hamad in mid-March 2011.

Meanwhile, a policeman in Bahrain was arrested after a video showing him hitting a resident in front of his baby was posted online.
"The video shows the policeman slapping a citizen in Aali, a local village, on December 23rd, 2012," the interior ministry said in its statement.

For its part, al-Wefaq, the main opposition grouping in the tiny Gulf kingdom, denounced the incident, saying the policeman "slapped the citizen and insulted him."

In the face of such repeated incidents, the people "stick to their legitimate demands... for democratic reforms", it warned.