Palestinian refugees streamed back into their camp in Damascus on Friday after a reported deal to keep it out of Syria's conflict, following fierce clashes earlier this week. 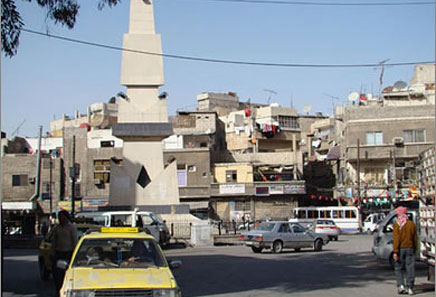 Streets of the Yarmouk camp in the south of the capital were empty of gunmen with the rebel forces.
"We returned because we have had enough of being humiliated," one of them said. "We lost our land [Palestine] but we don't want to lose our homes and live in tents like our parents."

Residents were called to attend weekly Muslim prayers on Friday at the camp.
Many of them already returned Thursday evening, singing traditional Palestinian songs and sweeping away debris from battle-scarred streets inside the camp.
Mahmud Nassar, a Palestinian activist in Yarmouk, spoke of his joy at the return of the refugees.
"It is a beautiful day. The people of Yarmouk know that the camp is the capital of the Palestinian refugees. Nobody can destroy it," he told AFP.

Talks began on Wednesday aimed at removing both rebel and pro-government fighters from Yarmouk as residents took flight from the fighting in the camp in their droves.
In this context, a Syrian diplomat stressed that "a settlement was reached and it led to the exit of armed terrorists from the camp."
In an interview with al-Ahed News site, the source stressed that "the situation is good in the camp despite the cautious calm."

Meanwhile, he accused "the sides and countries supporting the terrorist groups of being responsible of the Yaromuk catastrophe and the displacement of its people."
"Syria was and is still keen on the camp's population," the source stated, as he called the refugees to return to their camp.
However, he refrained from commenting on the Lebanese debate regarding the control of borders with Syria after the influx of Palestinian refugees to the Lebanese territories.

It is worth mentioning that Syria is home to 490,000 Palestinians, most of them having fled to the country during the 1948 "Israeli" aggression.