Over and over again, "Israel" commits all kinds of coward and dreadful massacres and crimes, the only difference this time: the Resistance is invincible. A new political and military equation is seeing light in the Middle East, clearly revealing "Israel's" geo-strategic vulnerabilities.

The Zionist entity, which was once notorious for its invincibility has proved unable to intercept short-range and long-range resistance rockets, while its leaders roll one after the other towards resignation, most recent of which is the Zionist War Minister Ehud Barak. 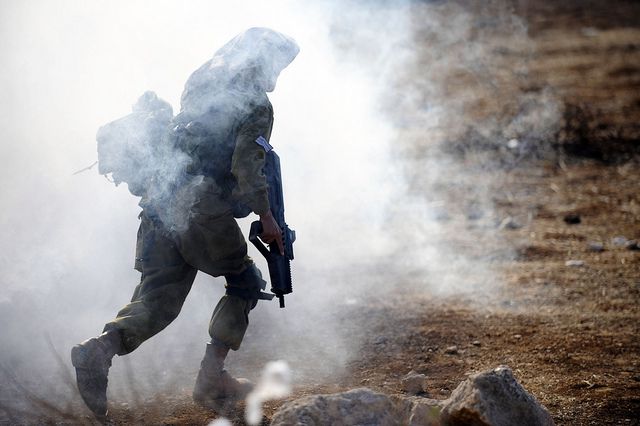 Pragmatically speaking, uprooting the Palestinian Resistance is impossible, and uprooting the neighboring Resistance movement in Lebanon, Hizbullah, is even out of question. "Israel" finds itself entrapped within the Resistance axis, losing international support and living more turmoil on the inside. Not only that but also the Resistance in Palestine manacled "Israeli" ground troops, preventing any ground invasion thanks to the Iranian-made missiles.
Watching the scene in the "Israeli Pillar of Cloud" fiasco reminds right away of the 2006 July war which turned out to be a divine victory for the Islamic Resistance in Lebanon, when "Israeli" battleships and helicopters were targeted. The Hamas and Islamic Jihad capabilities and long-sighted vision (unlike that of "Israel") justifies the absence of "Israeli" Apachi helicopters and the freeze of ground operations in the latest Gaza assault.

The battleships, warplanes, infantry troops, tanks, and the farthest "Israeli" settlements have become within the reach of the Palestinian Resistance missiles.
And despite the fact that "Israel" brutally massacred the Palestinians, leaving more than 160 Palestinians martyred and more than 1200 injured, yet the Gazans stood resolute and unyielding, versus a scene of screams and panic among the "Israeli" military society.

Today, not only Gaza and its resistance enjoy the support of the region's most powerful states, but also it has started to enjoy a more international backing.
Despite the US past, present, and current support of "Israel", "Israel's" so-called deterrence power has been destroyed vis-à-vis the axis of Resistance, and just like it proved a scandalous failure in the 2006 July aggression, and in the 2008 war on Gaza, the Zionist entity reaped the fruits of downfall in the 8-day aggression. "Israel" can no longer attack and expect no response.
The new capabilities of the Palestinian Resistance which surprised "Israel" in striking deep inside the Zionist entity makes it think twice before taking any stupid military strike.

Palestinian leaders have assured that "Israel" lost ‘Big Time' in the last assault. The Islamic Jihad leader, Ibrahim Najjar, confirmed that the recent confrontation changed the existing balances, which have lasted for six decades, in terms of "Israel's" vaunting towards the Arab nation in general, and the Palestinians in particular.

The Hamas official Khalil Abu Laila, for his part, assured that the most important elements in this equation were the steadfast of the Palestinians and the resistance weapons, either locally-made or Iranian-made.
Also, the surprises of the Resistance in Lebanon have bewildered "Israel". On the latest event held in Dahyeh, the Beirut Southern suburb commemorating Ashoura, Hizbullah Secretary General His Eminence Sayyed Hassan Nasrallah addressing the Zionist enemy vowed "Let the "Israeli" leaders listen to this: the battle with "Israel" is not restricted to a 70 km distance, in fact it includes the whole of "Israel" from Kiryat Shmona reaching Eilat (settlements)."

He highlighted that "Israel" could not tolerate some Fajr missiles hitting Tel Aviv during the 8-day "Israeli" assault on Gaza, questioning "How can "Israel" even consider attacking Lebanon when it will be met with tens of thousands of rockets that will rain down on Tel Aviv and other "Israeli" territories?"
With new elements put on the table before the Zionist entity-while many other cards have not been revealed yet- "Israel" stands confused while living the domino effect on the governmental and popular levels.