Syrian President Bashar al-Assad stressed to the UN envoy to Damascus Kofi Annan that "he isn't ready to offer new concessions to the international community." 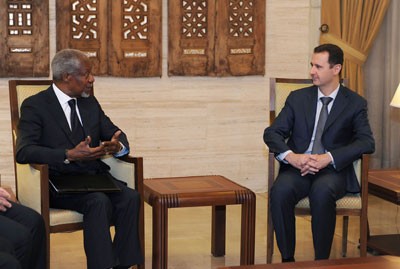 High-level political sources that attended the meeting between the two men, last Thursday, informed "al-Binaa" Lebanese newspaper that "President al-Assad told Annan that he had militarily clenched on the ground from the beginning of the last month i.e. before UN observers arrived to Syria."
"I am ready to military decisiveness again within 24 hours if things require that required to do so," confident al-Assad told Annan.

He further confirmed that "the World states must acknowledge that they have no ability to confront Syria, because the international community is fully aware of what Damascus could do just a few hours after the first bullet is shelled on the Syrian capital."
The sources pointed out that President al-Assad cut more than once Annan's statements during the meeting, and he asked the Syrian personalities who attended the meeting to give Annan a pen and a paper so that the UN envoy would write al-Assad's messages to the international community.

"Syria is ready to face all the military options, and Damascus will shake the world as no conspirator political system will survive from the Middle East's earthquake," the Syrian President warned.
He further asked Annan to advise the Qatari and Saudi leaders not to tamper politically and via media with Syria.
"Till the moment, I proposals to send intelligence cells as part of a long attrition war of with Riyadh and Doha," sources told "al-Binaa".

In response to predictions that Annan might inform the UN Security Council of the failure of his mission, al-Assad said: "it is better that Annan does so, so that the UNSC would withdraw the observers."
"In this case, the Syrian military forces will return back to their old positions to resolve the conflict militarily and expel the so-called Free Syrian Army to Lebanon," the Syrian President confirmed.