There they stand shed by the sky.

Their hearts limp in passion towards the Mighty God.

There in Arafat the soul addresses the only Love, prays, calls, and cries forgiveness.

There the annual miracle is embodied with white dresses and pure hearts.

It's Hajj: Islam's journey and dream.

Swarms of pilgrims who had spent the night in Mina, some 10 kilometres(six miles) northwest of Arafat surged through the roads leading to the mountain after midnight. 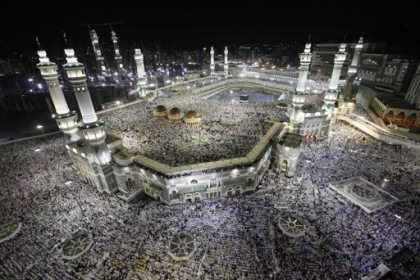 By sunrise Saturday, the Jabal al-Rahma, or the Mount of Mercy -- the highest
point in Arafat, became mostly covered in white as pilgrims, dressed in white garments, climbed to the top to take up positions on the hills' slippery rocks and spend the day in prayers and reflection.

In Lebanon, as the country enters the Eid's Vacation, sill the national dialogue topic is the flame of political debate.


Berri: Hizbullah Arms Not into Discussion

Lebanese House Speaker Nabih Berri stressed that "people are wrong in believing that Hizbullah's arms are to be the subject of discussion at the dialogue table."

In an interview with "al-Manar" TV, Berri reiterated that "the only defense strategy that the dialogue addresses is based on the equation of the army, people, and resistance."

Emphasizing the importance of resuming the without preconditions, he noted that "it will no longer be a dialogue if conditions are set."

"The dialogue is necessary for not just internal reasons, but external ones as well and there can be no real Lebanon without dialogue," "al-Manar" quoted Berri as saying.

Commenting on the issue of the Special Tribunal for Lebanon's funding, the speaker noted that "the matter is related to its constitutional legitimacy and the way it was formed." "Lebanon's democracy allows contentious issues to be subject to a vote at cabinet and they are also free to subject it to a vote at parliament," Berri stated.

Addressing the escalating "Israeli" threats against Iran, Lebanon and Gaza, House speaker viewed that he is not entirely worried about them, "but we shouldn't completely dismiss them."

"We should beware of military madness and this is an additional reason to activate the dialogue," he confirmed
.
Meanwhile, "an-Nahar" Lebanese daily reported that President Michel Suleiman is expected to meet Saturday with Speaker Berri in order to discuss the possibility of resuming national dialogue in Lebanon.

According to "an-Nahar", the president is expecting Berri to brief him about his recent calls to resume dialogue.

"Suleiman and Berri discussed earlier in the week the possibility to meet...and if the sit-down is not held today, it will be postponed until after the Adha holiday," the paper added.

At another Lebanese concern, Minister of Labor Charbel Nahas announced that "the deadline to resolve wages is not supposed to exceed the end of this month."

"The wages' issue moves on to the next level by the middle of the coming week as several direct meetings are set to be held between Labor Minister Charbel Nahhas and representatives of economic committees, the General Labor Union and the Union Coordination Committee," the paper said.

Minister Nahhas predicted to "as-Safir" that there is a great opportunity for resolving [this issue] provided that all parties honestly intend to do.

The daily mentioned has learned that a GLU delegation headed by Secretary General Saadeddine Hamidi Saqr handed over the confederation's response to Minister Nahhas.

For its part, "al-Akhbar" newspaper unveiled that "during its recent closed meeting, "Change and Reform bloc" decided to focus on the economic and social showdown, the early tidings of which were expressed by accusing former PM Fouad Siniora of financial crimes.

During a press conference, Chairman of the Finance and Budget Commission MP Ibrahim Kanaan spoke about the details of the "embezzlement" of an iron cashbox involving "Future" Movement MPs, including former PM Siniora and Finance Minister Mohammad Safadi.

STL Lawyers to Undermine Its Basis

In parallel, and under the title, "STL Lawyers Seeking to Undermine It," "al-Akhabr" learned that the participation of lawyers in the proceedings of the Defense Office of the STL does not mean their conviction in its legitimacy and credibility.

Information from Hague reflects that the team of lawyers is seeking to undermine the basis the STL was established on.