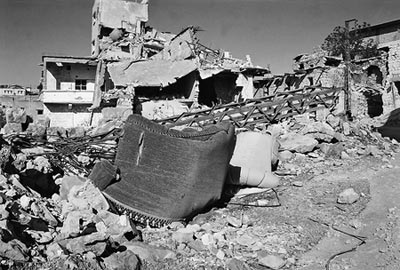 Collective punishment of Lebanon in 2006 deemed insufficient by the Israelis.


Shortly after the termination of the July War four years ago, I visited the south Lebanese town of Bint Jbeil-largely destroyed by "Israel"-and was invited into the home of a family that had only recently returned to south Lebanon after residing in the United States for a number of years.

The family's 13-year-old daughter Maryam summarized their wartime experience, which had involved spending approximately 10 days in a basement with dozens of relatives and neighbors and attempting to reconcile themselves to the idea of impending liquidation by "Israeli" surgical precision. The group eventually escaped north in a caravan of vehicles, only the last of which was liquidated; Maryam nonetheless expressed her sincere hope that the U.S. media had not portrayed the full reality of the war, as she was concerned it would have been unnecessarily painful for the American public.

There is abundant evidence that Lebanese teenagers who have narrowly escaped "Israeli" bombing by rush-delivered American weapons need not expend too much energy fretting that their own near-demise might disrupt American comfort levels, and can instead rest assured that Bint Jbeil was dutifully portrayed as Hizbullah's "terror capital" during the war. U.S. environmentalists may experience slightly higher levels of discomfort, however, as the top result of a Google search of the terms "New York Times Lebanon war casualties 2006" is currently an article published nearly 20 days into the conflict-in which nearly 1200 Lebanese civilians were killed-entitled "Casualties of War: Lebanon's Trees, Air and Sea".

One of the advantages of "Israeli collective punishment" of various Arab populations is that when hundreds or thousands of civilians are killed, it is naturally impossible to delve into the circumstances of each individual tragedy and victims are often reduced to mere statistics. An example of the tendency to dehumanize certain nationalities while humanizing others is found in U.S. President Barack Obama's 2009 Cairo speech in which he ordered Palestinians to abandon violence against "Israelis" because "[i]t is a sign of neither courage nor power to shoot rockets at sleeping children, or to blow up old women on a bus"; no corresponding sense of humanity is offered to Palestinian victims of "Israeli" aggression, despite the fact that it is also presumably not courageous to flatten sleeping Gazan children in their apartment blocks with F-16s.

As for more individualized forms of "collective punishment", these include the 2006 capture by "Israeli" commandos of a Lebanese grocer by the name of Hassan Nasrallah. Broader forms of punishment are meanwhile apparently in the works, as "Israel" has warned the Lebanese government that it will now be held responsible for Hizbullah's actions; it has not explained how the destruction of Lebanese territory, infrastructure, and citizenry in 2006 did not constitute holding the state responsible, or why the state of Israel should not be held responsible for the actions of its armed forces.

Belén Fernández is an editor at www.pulsemedia.org and the author of Coffee with Hezbollah, a humorous political travelogue about her hitchhiking travels through Lebanon with photographer Amelia Opalinska in the aftermath of the July War.