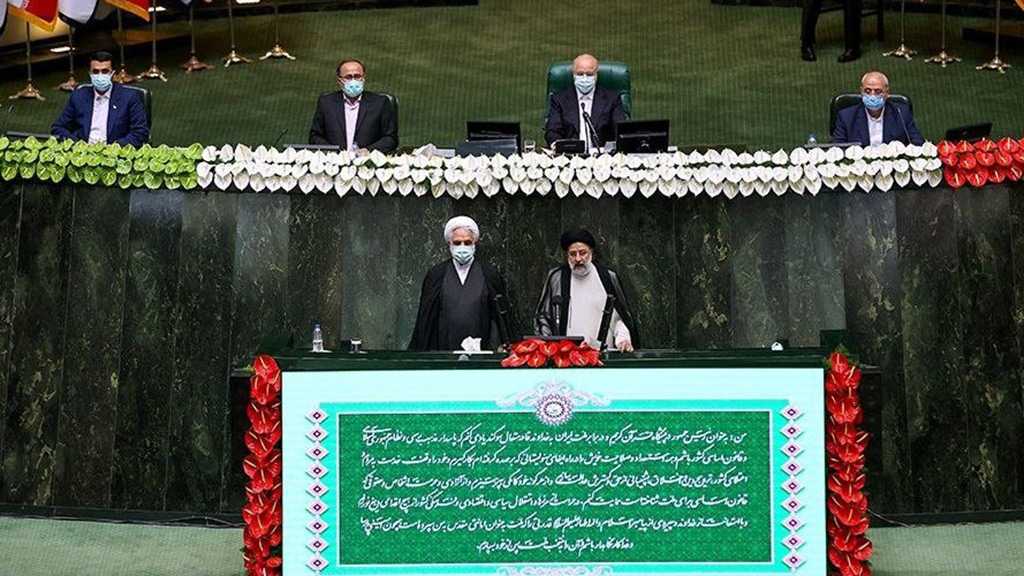 After having his mandate endorsed by Leader of the Islamic Revolution His Eminence Imam Sayyed Ali Khamenei, Sayyed Ebrahim Raisi has taken the oath of office to be officially inaugurated as the eighth president of the Islamic Republic of Iran.

The swearing-in ceremony was held at the Iranian parliament on Thursday afternoon, attended by high-ranking Iranian civil and military officials as well as a great number of foreign dignitaries from more than 70 countries.

The ceremony started with a speech by Iran’s Parliament Speaker Mohammad Baqer Qalibaf followed by an address delivered by head of Iran’s Judiciary Gholamhossein Mohseni Ejei.

After speeches were delivered by heads of the Judiciary and Legislature, Ebrahim Raisi took to the podium to be sworn in as Iran’s eighth president following the Islamic Revolution of 1979.

During the oath-taking ceremony, Raisi read out the text of the oath, which says, "I, as the President, upon the Holy Qur'an and in the presence of the Iranian nation, do hereby swear in the name of Almighty God to safeguard the official Faith, the system of the Islamic republic and the Constitution of the country; to use all my talents and abilities in the discharge of responsibilities undertaken by me; to devote myself to the service of the people, glory of the country, promotion of religion and morality, support of right and propagation of justice; to refrain from being autocratic; to protect the freedom and dignity of individuals and the rights of the nation recognized by the Constitution; to spare no efforts in safeguarding the frontiers and the political, economic and cultural freedoms of the country; to guard the power entrusted to me by the nation as a sacred trust like an honest and faithful trustee, by seeking help from God and following the example of the Prophet of Islam and the sacred Imams, peace be upon them, and to entrust it to the one elected by the nation after me."

Iran’s top diplomat then focused on the problems facing the country and the nation in his speech, especially economic problems, stressing the importance of taking decisive steps to solve people’s problems without bringing any excuses.

“We have entered a new phase of management in the country. The [Iranian] people, through their participation in the parliamentary and presidential elections, gave us the opportunity to solve people’s problems, particularly those problems that are nagging the underprivileged and middle classes, in order to prove that a Jihadi [strong and relentless] managerial system is the solution to all material and spiritual problems in the country,” he said.

Iran’s parliament speaker emphasized the importance of boosting the efficiency and accountability in the country to make progress during the new phase of governance, saying that all Iranian officials are duty-bound to restore the economic stability, hope and cheerfulness to the country and its people.

The administration shoulders the main responsibility in this regard because it possesses the highest executive capacities of the country, Qalibaf said, adding, however, that synergy and cooperation among all branches of the government will play a leading role in solving the country’s problems.

“We know that the enemy’s threats and sanctions have created difficulties in the country’s management, but there are also considerable God-given, popular, economic and international capacities that can help us overcome these challenges,” the top Iranian parliamentarian pointed out.

Addressing the ceremony, Mohseni Ejei expressed the readiness of the Judiciary to help the administration fight against corruption.

He wished success for the president in fulfilling such an important responsibility in cooperation with other branches of the government, the elite and the public.

He expressed hope that Raisi would take swift steps to solve the people’s problems at the earliest, eliminate corruption and discrimination and amend complicated administrative structures.

“Iran’s Judiciary will be more serious than ever in the fight against corruption,” Mohseni Ejei said.

According to Seyyed Nezamoddin Mousavi, the spokesman for the Parliament’s presiding board, long lists of foreign officials and political figures have accepted Iran's invitation to attend the event despite the COVID-19 pandemic.

A high-level delegation from the European Union [EU], led by the Deputy Secretary General of the European External Action Service Enrique Mora, has participated in Raisi’s inauguration. Mora is accompanied by Stephan Klement, head of the EU delegation to the international organizations in Vienna, and Head of Task Force European Union Bruno Scholl.

A high-ranking delegation representing the Palestinian Hamas movement also arrived in the Iranian capital at dawn Thursday to attend the inauguration of president-elect Ibrahim Raisi. The Hamas delegation is led by head of the movement’s political office, Ismail Haniyeh.

The heads of 11 international and regional organizations and the representative of the UN chief; officials from the Inter-Parliamentary Union [IPU], including its President Duarte Pacheco; the Economic Cooperation Organization [ECO]; the Conference on Interaction and Confidence-Building Measures in Asia [CICA] and the D-8 Organization for Economic Cooperation also known as Developing-8 are also present at the event.

Some 170 domestic and foreign journalists have been invited to provide coverage of the event.