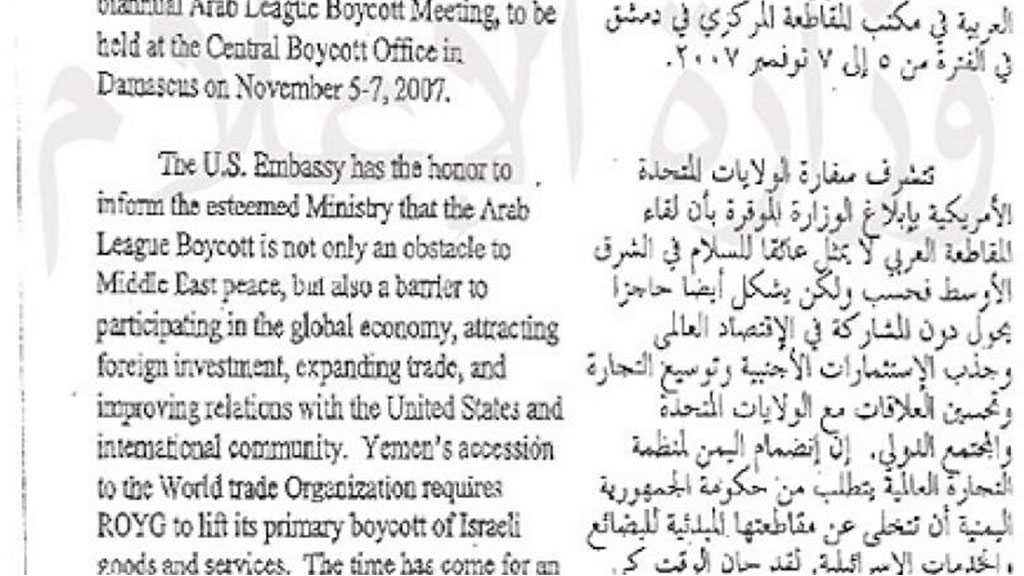 The Ministry of Information presented on Sunday a number of official documents that reveal early American efforts to end the boycott of ‘Israeli’ goods in Yemen.

The documents presented by the Ministry of Information revealed the US embassy’s request from the Saleh regime to end the economic boycott of ‘Israeli’ products and not to participate in anti-US-‘Israeli’ activities. They also revealed US-‘Israeli’ annoyance at boycotting their goods in Yemen, while confirming that the majority of American companies have a relationship with the Zionist entity.

A document issued by the Ministry of Foreign Affairs dated May 9, 1993 showed that the US State Department carried out a campaign of pressure on the authority to open the country to the goods of the Zionist enemy and the companies associated with it.

The brief meeting between Foreign Minister Abu Bakr al-Qirbi and the American ambassador in Sanaa, Thomas Krajeski, on Wednesday, June 1, 2005, showed that the US employed Saleh's authority for lifting the Arab boycott system against the Zionist entity.

The document stated that the American ambassador conveyed a direct American directive to the authority to take a clear position on the Arab boycott conference, which takes place in the same month in the capital, Damascus. The document stated: “The ambassador made it clear that the US sees the futility of the boycott and the need to lift it, not only boycott of the second and third degree but rather the boycott of the first degree for companies that do business with [‘Israel’]."

The US ambassador said: "There is an increasing number of Arab countries that are working to violate the trade boycott system with [‘Israel’]."

The same document did not show at that time opposing the American pressures. The then foreign minister said that “the boycott system is fragile and there is no real boycott, as many Arab countries have opened commercial offices for ‘Israel’ on their lands,” as stated by al-Qirbi.

The documents include a memorandum classified under “Urgent” issued by the US Embassy in Sanaa on the 4th of November 2007 and addressed to the Ministry of Foreign Affairs. It stated a number of US directives to the former regime, chief among them: “Not to support or send representatives to the biannual boycott meeting held by the Arab League in the office of the Arab League in the Central District of Damascus.

The embassy memo stated: "The Arab boycott meeting not only represents an obstacle to peace in the Middle East, but also constitutes a barrier to participation in the global economy, attracting foreign investment, expanding trade, and improving relations with the United States and the international community. Yemen's accession to the World Trade Organization requires that the government of the Republic of Yemen has to abandon its initial boycott of ‘Israeli’ goods and services.”

The same document also reveals that the US administration was implementing a wide campaign of pressure targeting the Arab countries whose people adhere to the boycott. "The time has come for the Arab League to take a decision to close the central district office in Damascus."

The Ministry of Information, publishing these documents to the public opinion as evidence of the American guardianship imposed on Yemen prior to the September 21 revolution, called on the masses of the Yemeni people to commit to the weapon of economic boycott, which has a high effect on the US-Saudi enemies of the nation, and to continue supporting the Palestinian people and confronting aggression against our country until victory.