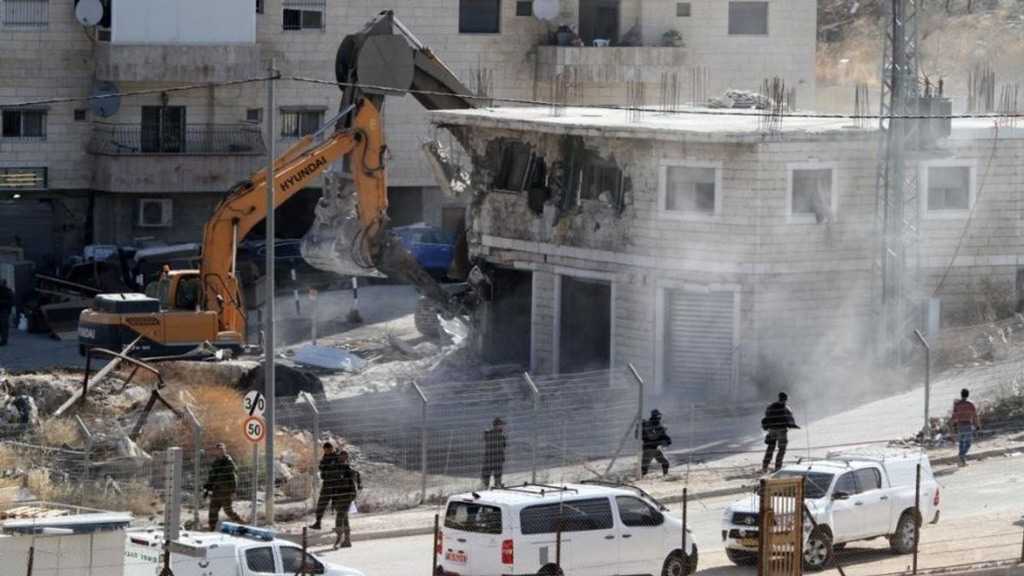 The illegal demolition of the Palestinian Bedouin community of Humsa al-Baqai’a in the Jordan Valley by “Israeli” forces “raises serious risk of forcible transfer,” the UN warned, calling on Tel Aviv to immediately halt such measures.

“Attempts to force this or any other community to relocate to an alternative location raise a serious risk of forcible transfer. While the ‘Israeli’ authorities have tried to justify this citing their domestic designation of this area for military training, such measures by an occupying power are illegal under international law,” the Humanitarian Coordinator for the occupied Palestinian territory, Lynn Hastings, said in a statement on Friday.

He urged the “Israeli” occupation forces to “immediately halt all further demolitions of Palestinian homes and possessions, allow the humanitarian community to provide shelter, food and water to this most vulnerable community and let these people rebuild their homes in their current location and stay there in safety and dignity.”

The UN official noted that “Israeli” forces blocked access of humanitarian personnel to the families throughout the demolished village.

Hastings said, “When they managed to access the community after the demolition, they found tents, food, water tanks and fodder had all been destroyed or confiscated, leaving people – including children - out in the open, in summer heat, with virtually no basic provisions; even milk, diapers, clothes and toys had been taken.”

According to assessments, he added “six families of 42 people, including 24 children have lost their homes, for the sixth time this year. Thirty-eight structures were demolished or confiscated, most alarmingly, water tanks.”

The United Nations Office for the Coordination of Humanitarian Affairs [OCHA] said in a statement that the so-called “Israeli” Civil Administration [ICA] has confiscated food consignments and detached structures, leaving the residents with no food and water following the demolitions.

The demolitions have also left the villagers with no baby milk powders, clothes as well as personal hygiene products. They also have no fodder and water for their livestock.

Palestinian homes in the Jordan Valley are subjected to demolitions by “Israeli” authorities who claim they lack building permits, despite the fact that the Tel Aviv regime does not provide such permits to Palestinians.

Moreover, the “Israeli” entity orders Palestinians to demolish their own homes or pay the demolition price to the municipality if they refuse to tear down their houses. Palestinians as well as the international community consider “Israeli” demolition politics in the occupied territories illegal.

A United Nations’ human rights investigator on Friday denounced “Israeli” settlements in the West Bank as a “war crime” and warned that Tel Aviv’s “illegal occupation” cannot be cost-free.

Michael Lynk, UN special rapporteur on human rights in the occupied Palestinian territories, was addressing a session of the world body’s Human Rights Council in Geneva.

“I conclude that the ‘Israeli’ settlements do amount to a war crime,” Lynk said.

“I submit to you that this finding compels the international community…to make it clear to ‘Israel’ that its illegal occupation, and its defiance of international law and international opinion, can and will no longer be cost-free,” the UN official added.

In its bi-weekly report on “Israeli” violations on July 2, the OCHA said Israeli forces had either demolished or seized two dozen Palestinian-owned structures in the occupied territories of the West Bank and al-Quds [Jerusalem] in a span of two weeks.

It added that the demolitions were carried out between March 15 and March 28 this year under the pretext that they lacked the necessary construction permits.

Throughout the years, the entity has frequently demolished Palestinian homes, claiming that the structures have been built without permits, which are nearly impossible to obtain.