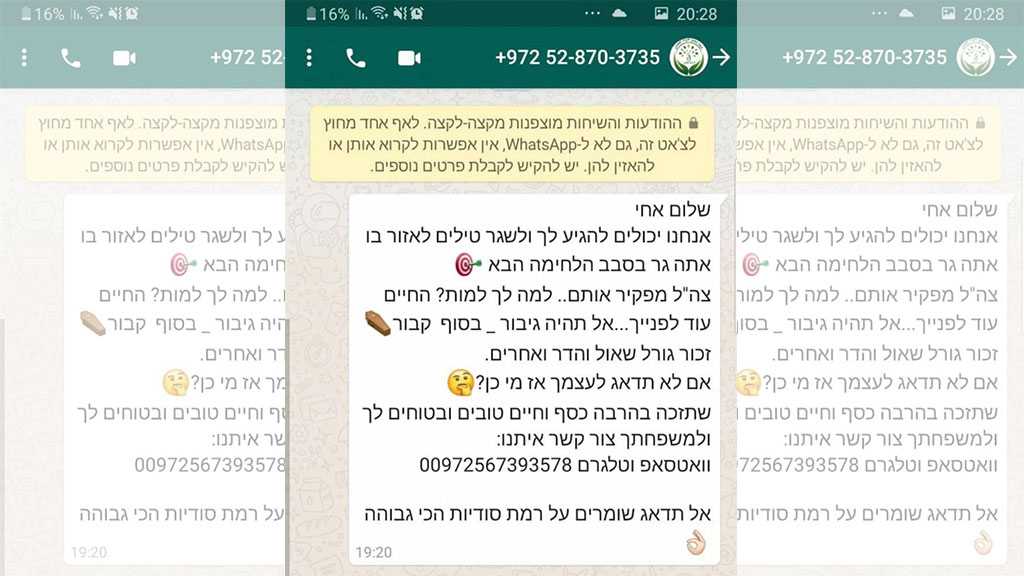 Soldiers from different brigade combat teams within the ‘Israeli’ army received messages from members of Hamas, according to Channel 20.

One of the messages, written in Hebrew, the channel said, read the following: “Hello Eric, we can reach you and we can launch rockets to the place where you live in the future battle. The army has abandoned you, so why should you die? Life is still ahead, don’t be a ‘hero’ while you will finally be dead.”

A message also stated: “Remember the fate of Shaul, Hadar and others. Hadn’t you taken care of yourself, of whom would you take care! To earn a lot of money, good and secure life for you and your family, contact us via WhatsApp and Telegram on the following number: 00972567393578. Do not worry, we maintain a high level of secrecy.”

The channel also described the measure as “bizarre”, pointing to that the Zionist military security units have been informed about the matter, and the ‘Israeli’ Shabak intelligence apparatus has been designated to deal with the issue.

For its part, the occupation army commanded its soldiers not to respond to any message or attempt to communicate with the sender, but rather block and delete the sender’s number.