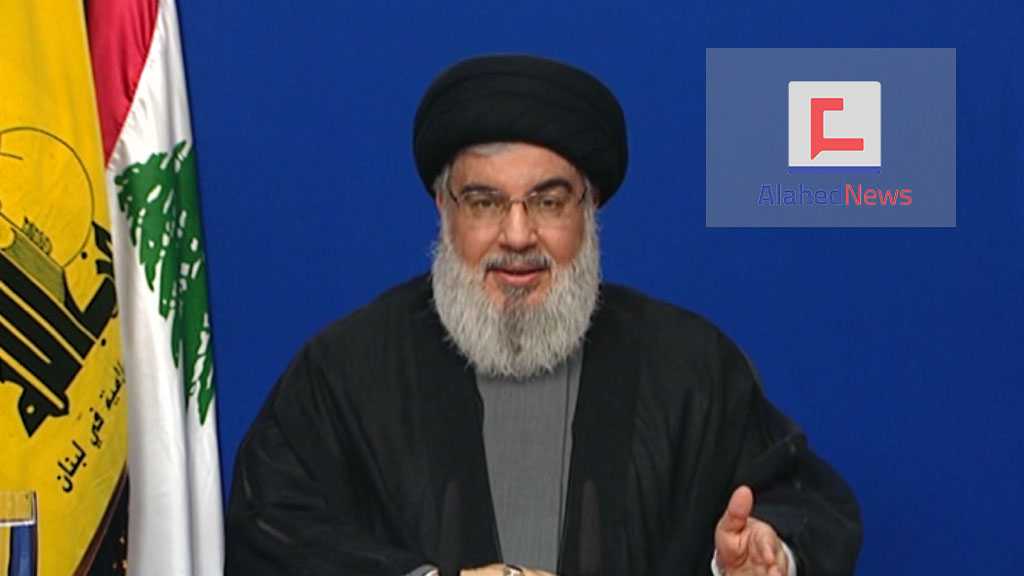 Hezbollah Secretary General His Eminence Sayyed Hassan Nasrallah delivered on Friday, June 25th, 2021 a speech in which he tackled the latest developments on the Lebanese arena.

At the beginning of his speech, Sayyed Nasrallah reflected deep and warm condolences to Imad Hawila who has lost this week his wife and four daughters in a car accident that was caused by traffic of cars waiting their turn in front of a gas station on South Lebanon-Beirut highway. His Eminence also condoled the family of the deceased relative, Hussein Zein, who was driving them to Beirut when the accident happened, for the loss of their son.

Labelling Washington's banning of websites in the region as an evidence on the fake claims of the US administrations, Sayyed Nasrallah denounced the American aggression against media outlets that majorly belong the culture of resistance.

Moving to the home front, Sayyed Nasrallah blasted the US media provocation targeting the Lebanese people against each other, underscoring that “the real goal behind the American rhetoric is to incite the people of resistance through making the fortifying of the Lebanese Army a suspicious matter.” Nevertheless, Sayyed Nasrallah made clear that Hezbollah always calls for fortifying the Army even if the US is the side in charge.

“When the US attempts to justify its logistic aid to the Lebanese Army it says that it is to confront Hezbollah,” His Eminence said, pointing, however, to that “even in Hezbollah's practical behavior, we sought support for the Lebanese Army from friendly countries.”

The Hezbollah leader highlighted that “We find the establishment of the Lebanese Army as the real guarantor for Lebanon's security, stability and unity,” adding that “in our culture, the Lebanese Army is a main part of the golden equation of Lebanon's strength; which is the Army, the people, and the Resistance.”

Sayyed Nasrallah also explained that the US administration fears that the Lebanese Army would be in a serious and true position to confront the 'Israeli' enemy.

Ruling out any Iranian involvement in the Lebanese affairs, Sayyed Nasrallah stated that Iran refuses to discuss any issue other than its nuclear program in the Vienna Talks: “Neither does Iran negotiate on the ballistic missiles, nor on the regional issues.”

Additionally, in the entire course of the Saudi-Iranian talks, the Lebanese issue was not discussed, Sayyed Nasrallah assured citing Iranian allies whom he referred to as “people who don’t hide facts from us.”

The aforementioned talks, Sayyed Nasrallah said, “focused on bilateral ties, and not on the Lebanese issue that doesn’t make any difference in the Saudi-Iranian understandings.”

“Iran doesn't negotiate on behalf of any side,” His Eminence emphasized, pointing to that it is ready to offer any help when asked to by a friend.

The resistance leader blasted some sides in Lebanon that seek to take advantage of any incident to defame others and settle political accounts and said: “Some sides insist in their political stances to hold Iran and Hezbollah responsible for not forming the Lebanese government, and the Americans are trying to link the Lebanese issue with the negotiations with Iran, but Tehran is the side that is rejecting it.”

While describing the practices of accusing Hezbollah of hindering the formation of a new Lebanese government as a calumny, deception and aggression, Sayyed Nasrallah shifted to an advise saying that “all efforts should consolidate at home to confront the government and lead the country to exit this impasse.”

Elsewhere in his remarks, Sayyed Nasrallah hailed the initiative of Parliament Speaker Nabih Berri which he said has led with different sides to reach an important point which is agreeing on the number of ministers.

Additionally, in comments on the Free Patriotic Movement’s Leader, Gibran Bassil’s proposal, and the reactions that followed, Sayyed Nasrallah slammed the political Takfirism, and sectarian and racial language that have been heard.

“The campaign that was launched after Bassil's speech is a clear evidence that those who are responding to him don't listen, and when they listen, they don't understand, and if it happened that they understood, then they will deny it,” His Eminence explained.

“We started responding to Bassil's call, we open our hands for help, and we defend the rights of every Lebanese person who has a right; this is our duty,” Sayyed Nasrallah said.

Then he went on to explain Bassil's use of the word 'judge' which he said expresses trust and not the literal meaning of the word, adding that the judge needs to be accepted by either side; this is not suggested and I, myself, am not in place of playing this role, His Eminence noted.

On the level of the humanitarian crisis, Sayyed Nasrallah said that “what we are witnessing on the level of fuel, food, and medicine should be an ethical point of pressure on those concerned with forming the government.”

All administrative and logistic introductions to import gasoline and diesel oil from Iran to Lebanon and distributing it have been done, and this promise is still valid, Sayyed Nasrallah underscored, then reiterated the promise he has given a few days earlier that when the state fails to secure the shortage of oil derivatives, then Hezbollah will seek buying oil from Iran.

Expressing that Hezbollah’s perceptions didn’t ever include being involved in the sector of importing gasoline and diesel oil, Sayyed Nasrallah emphasized, without any hesitation, that “we are even ready to work as dustmen for our society and people to preserve their honor and dignity.”

He then addressed those who block paths towards solutions, and advised them to go to their Saudi, Gulf and American friends to help Lebanon in solving the problem of gasoline, diesel and fuel, telling them “we will wish you luck!”

Asking why doesn't the state establish oil refineries and secure a huge share of the Lebanese market's needs with lower costs, Sayyed Nasrallah uncovered that there is a company which is ready for this project and just needs an [official] signature.

Elsewhere on the livelihood crisis, Sayyed Nasrallah considered that the finance card could help many Lebanese families to survive amid the crisis.

Sayyed Nasrallah warned that the continued blocking of roads will lead to another line of humiliation aside from that of waiting for gasoline and medicines. “People should pay attention in this stage because vandalizing public facilities & blocking roads harm people & increase their pains.”

Despite the many crises in Lebanon, Sayyed Nasrallah said we have a blessing of security, stability, and civil peace, however, there are some sides that want to push the country to a blast, those are the ones serving the enemy.

His Eminence also mentioned that the Lebanese Forces don't spare any occasion to attack Hezbollah, but the resistance movement doesn't respond to them.

Sayyed Nasrallah underscored, from a religious perspective, that burying discord inside the country is the most important thing to do.

Before the end of his speech, Sayyed Nasrallah didn’t miss the opportunity to thank Iraq and every side that would contribute to helping Lebanon overcome its crises.

Sayyed Nasrallah finally hailed the Iraqi Kataib Hezbollah resistance group for joining the equation he has launched in a previous speech about being part of the front that is responsible for defending the holy occupied city of al-Quds in Palestine.