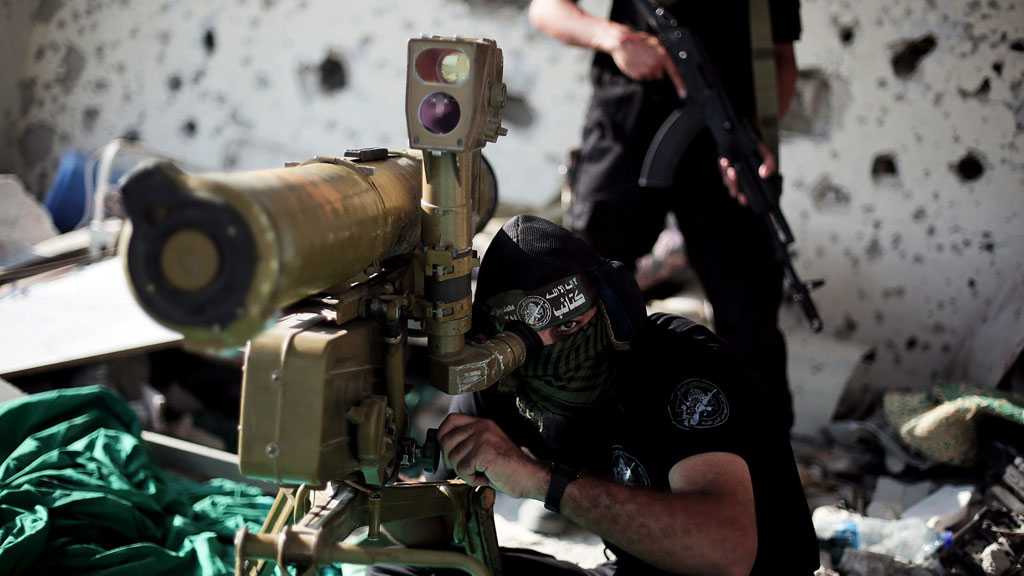 In the lead up to the latest confrontation with “Israel”, the spokesman for the Al-Qassam Brigades, Abu Obaidah, issued a stern warning to Tel Aviv. On May 10, at exactly 4:40 p.m. local time, Hamas’s military wing gave the “Israeli” enemy "until six o'clock to withdraw its soldiers from the blessed Al-Aqsa Mosque and the Sheikh Jarrah neighborhood and to release all detainees taken during the recent uprising in Al-Quds.”

Following the threat, the leadership of the resistance in Lebanon contacted their Palestinian counterparts for an assessment of the situation on the ground.

A source in the Palestinian resistance told Al-Akhbar that the assessment was that “the head of the enemy government, Benjamin Netanyahu, will not cancel the settlers' march in Al-Quds and that the resistance will implement its threat, which involves bombing the ‘Israeli’ depth."

The Hamas leadership also informed those concerned in Lebanon that the Palestinian resistance was expecting a violent “Israeli” response and an escalation that would last for nearly two weeks. During the conversation, two red lines were set. If crossed, they would require the intervention of the axis of resistance. The first is that the battle continues for about 50 days, as was the case during the 2014 war, and the second is the targeting of the missile stockpile of the Palestinian resistance and it being forced to economize in the process of launching missiles towards the “Israeli” entity.

At exactly six o'clock on that Monday, the Al-Qassam Brigades fired six rockets at the occupied city of Al-Quds, starting the Al-Quds Sword battle.

The reason for choosing this particular time and the equivalent number of rockets is due to the fact that most of the slogans calling for Gaza's intervention to defend the city of Al-Quds were launched from Gate Number 6 at the Al-Aqsa Mosque compound. Before the resistance carried out its threat, “Israeli” security services had contradictory assessments regarding Hamas’s intentions and their ability to launch a rocket barrage at the center of the entity.

The army’s military intelligence Aman concluded that the head of the movement's political bureau in Gaza, Yahya Al-Sinwar, was not interested in an escalation and that his priority was to improve the economic situation in the Strip.

The Shin Bet Internal Security Agency said that Al-Sinwar was "a religious and extremist man who sees himself as Saladin and hopes to seize on the current momentum in order to portray himself as the protector of Al-Quds."

The Palestinian resistance believes that “Israeli” arrogance played a role in Tel Aviv’s miscalculations. They failed to take the final warning issued by the Commander in Chief of the Al-Qassam Brigades, Muhammad al-Deif (Abu Khaled), seriously in which he told the enemy that they would pay a dear price if they did not stop their attacks in the Sheikh Jarrah neighborhood.

According to sources in Hamas, "the enemy, because of its arrogance, thought that the response would be either demonstrations on the borders or launching a couple of missiles on settlements of the Gaza envelope. But it did not understand that Abu Khaled Al-Deif was the one who issued the threat, and the threat from a man of his stature could not be to launch rockets at the Gaza envelope.”

Hours before the first rockets were launched towards Al-Quds, the assessments of the Shin Bet were discussed by the security cabinet an hour before the resistance’s deadline expired.

During the session, the head of Shin Bet, Nadav Argaman, recommended a preemptive strike against Gaza, which was rejected by Prime Minister Benjamin Netanyahu and his defense minister, Benny Gantz. They wanted to wait for the first blow to appear as a victim, and then proceed with a military campaign that has American support. This is according to “Israeli” journalist, Ben Caspit, who made the revelations in Al-Monitor.

With the start of the Al-Quds Sword battle, the resistance in Lebanon raised the alert level, which was already elevated in anticipation of any “Israeli” provocations during the Chariots of Fire drills that the army intended to conduct early this month.

Despite the cancellation of the maneuver with the start of the Guardian of the Walls campaign (the name that the enemy gave to the battle), Hezbollah’s mobilization of the missile units continued.

During the battle, demonstrations rocked the northern borders of occupied Palestine. Several rockets were also launched towards the occupied territories. Most of the rockets fell into the sea, inside Lebanese territory, and in open lands in Palestine. Meanwhile, one rocket was intercepted near the city of Haifa.

Missiles and a drone were launched from Syria in conjunction with the ongoing battle in southern Palestine. The “Israelis” weren’t sure where the projectiles came from.

This was planned, and it can be considered an exercise for a war where the fronts are united and one where the enemy will experience the war of the great liberation. The coordination that took place during this battle between the factions of the resistance axis was part of a drill for the battle to eliminate “Israel”. Last year, the head of Hamas’s political bureau, Ismail Haniyeh, visited Lebanon, where he met with the Secretary-General of Hezbollah, Sayyed Hassan Nasrallah.

At that time, the work teams of Hezbollah and the Al-Qassam Brigades met to draw up a plan for the battle oof liberation, and what the enemy entity had experienced for 11 days was part of this plan.

According to leaders in the Palestinian resistance, the northern arena was not required to do more than what it did, as the main focus was on developments within the 1948 borders, the occupied West Bank, Al-Quds, and along the Jordanian border.

However, in any future battle, the enemy must realize that it will not only face Gaza, but be forced to confront Lebanon, Syria, Iraq, and Yemen as well.

During the recent “Israeli” aggression on Gaza, Yemen’s Ansarullah movement communicated with Hamas and requested coordinates for sites it wanted to target with missiles and drones. But Hamas informed the Sana'a leadership that the field and military situation in the Strip is very good, and if the enemy crossed any of the red lines agreed upon with the axis of resistance, then Ansarullah can carry out their strike.

The intertwining of the axis and the prevention of singling out any party in it is a new equation established by the resistance forces in the last battle. It is a reality acknowledged by the United States, which is warning “Israel” against creating instability beyond Gaza.

“The level of violence is destabilizing beyond the limited area of Gaza … it is in no one's interest to continue fighting,” Chairman of the Joint Chiefs of Staff Mark Milley warned.

This new reality was confirmed by Sayyed Nasrallah in his speech on the Resistance and Liberation Day a few days ago, when he said that "any harm to Al-Quds and the Al-Aqsa Mosque means a regional war."

Al-Sinwar also echoed this sentiment, saying in a press conference that "a regional war will take place if there is any harm to the sanctities, and that all the forces of resistance will be together in any future battle if the holy sites call upon us."

This is well understood by the enemy. An “Israeli” security source said the threats are credible.

“It seemed as if Nasrallah and Al-Sinwar’s speeches were coordinated,” the source stressed to Al-Monitor. “Nasrallah’s words must be taken seriously. He is the most credible of “Israel’s” enemies. He usually does not make empty threats.”

“The fact that he joined Al-Sinwar at this time and his declaration that any unilateral ‘Israeli’ move in Al-Quds will lead to a war must be treated in Al-Quds as a very serious warning.”

The prospects of confronting more than one side during the next war is something Chairman of the Foreign affairs and Defense committee in the Knesset, Zvi Hauser, also warned about.

"Perhaps this is the last time that ‘Israel’ faces Hamas alone. In the future, ‘Israel’ will face a challenge at the same time on additional fronts, such as the northern front, which makes the challenge more difficult.”

The liberation strategy developed by the two resistance groups in Lebanon and Palestine has become inevitable, and the recent war on the Gaza Strip showed some of its components. In addition, the resistance's maneuver throughout occupied Palestine showcased positive aspects and others that need more work in the near future to improve and invest in the battle of the great liberation.

In the next stage, the resistance will also work to consolidate its equation (linking Al-Quds with Gaza), even if this leads to a new round of fighting.