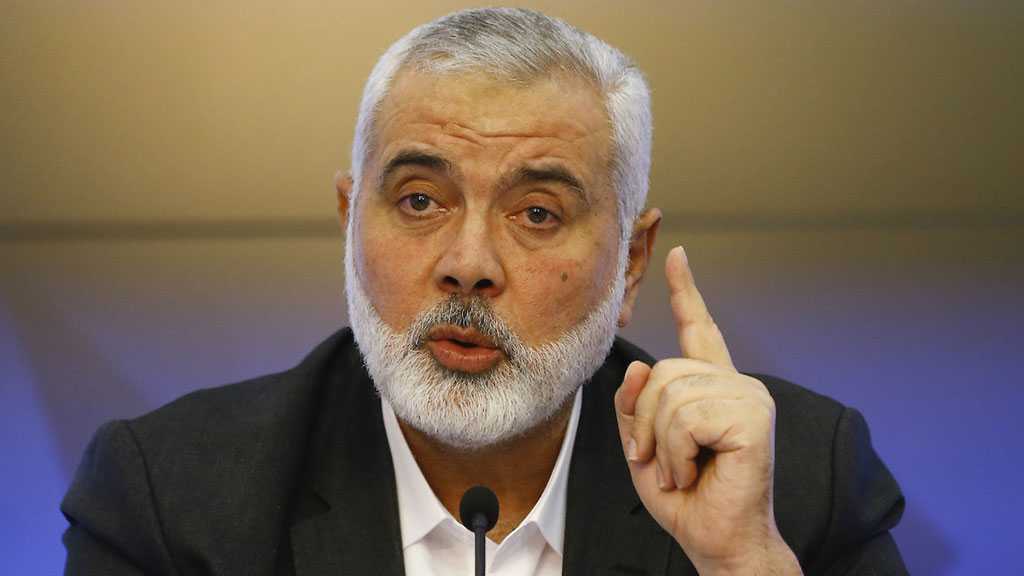 The head of the political bureau of the Islamic resistance movement Hamas, Ismail Haniyeh, believed that the occupied city of Al-Quds is witnessing an uprising and a revolution that must continue.

In a brief speech on Al-Aqsa TV, Haniyeh pointed out that "Despite all the ‘Israeli’ barbarism, Al-Quds has torn apart the ‘Deal of the Century’ thanks to the steadfastness of its people and the jihadist spirit that inhabits every Palestinian citizen.”

Haniyeh warned that "the situation prior to recent days is not the same as what’s coming after at the Palestinian, Arab, and Islamic levels. It is not permissible for a Muslim or Arab or any country to outstrip our Quds, our heritage, our history, and the feelings of the nation’s people and open relations with the occupation."

He explained that he had made numerous calls to a number of officials in the region, including Arab and Islamic countries, "and we warned against the repercussions of this aggression that is now taking place at the Al-Aqsa Mosque."

Haniyeh underscored the necessity of urgent intervention to stop this aggression and curb the occupation.

"Our decision is clear. We will not allow the Judaization of Sheikh Jarrah and the storming of the Al-Aqsa Mosque on the 28th of Ramadan, and the occupation’s violations against our people. It is also clear that what is going on is an uprising that must and will continue. Let everyone know that we are talking about awareness, resistance, and revolution."

Haniyeh asserted that any battle initiated by the occupation forces in Al-Quds cannot be won. "Plots have always been destroyed on the rocks of Al-Quds."

In a message to “Israeli” Prime Minister, Benjamin Netanyahu, the Hamas chief exclaimed: "Do not play with fire, and this is a battle you cannot win. On the rock of Al-Aqsa Mosque, this ‘Israeli’ pride and tyranny will be destroyed."