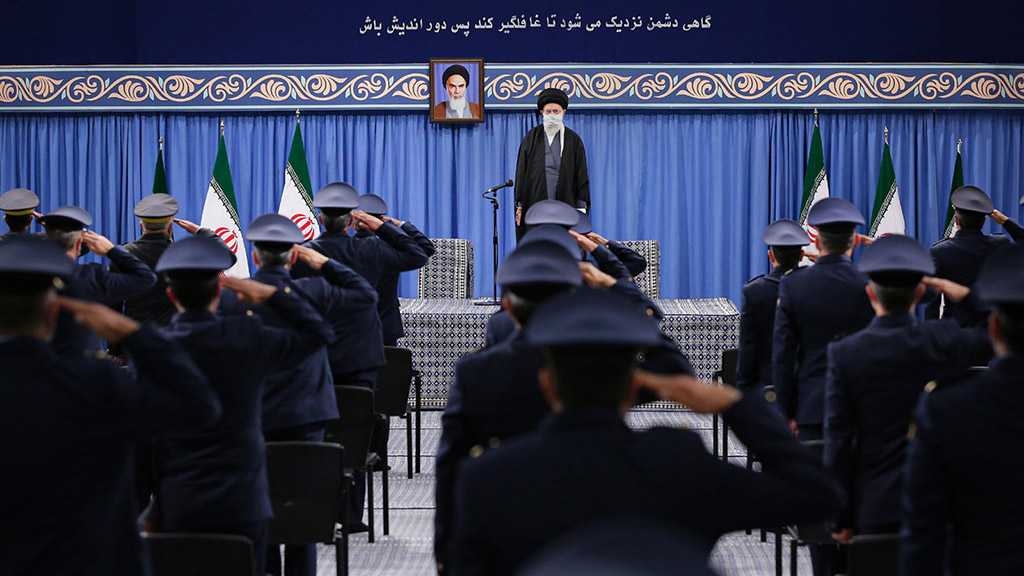 The Leader of the Islamic Revolution His Eminence Imam Sayyed Ali Khamenei confirmed that Iran will retrace its nuclear countermeasures once the United States lifts its sanctions in a manner that could be verifiable by Tehran.

“Iran will return to its JCOPA obligations once the US fully lifts its sanctions in action and not in words or on paper, and once the sanction relief is verified by Iran,” Imam Khamenei announced, referring by abbreviation to the Joint Comprehensive Plan of Action, the official name of the landmark nuclear agreement that Iran signed with the P5+1 group of states – the US, the UK, France, Russia, and China plus Germany – in Vienna in 2015.

His Eminence made the remarks in Tehran on Sunday during a meeting with commanders, pilots, and staff members of the Islamic Republic of Iran Air Force [IRIAF].

Under his signature “maximum pressure” policy against Iran, former US president Donald Trump withdrew Washington from the JCPOA and restored the economic sanctions that the deal had removed.

In his Sunday's remarks, the Leader said it was the “definitive and irreversible” policy of the Islamic Republic that the United States ought to first fully eliminate the sanctions before Iran could reverse its retaliatory measures.

Trump’s successor, Joe Biden, has signaled a willingness to rejoin the JCPOA, which was inked when he was vice president. However, his foreign policy team has said Iran should take the first step by coming back into "full compliance" with the deal, a condition Tehran says is unacceptable.

“The Americans and the Europeans have no right to set any conditions [of their own] as they violated their JCPOA commitments,” Imam Khamenei stated, adding that Iran would pay no heed to the “idle talk” of some “undeserving” American and European officials in this regard.

He further added: “They initially put some of the sanctions in abeyance for a brief period, but then re-imposed and even intensified them,” in reference to Washington and its allies’ initial limited compliance with the JCPOA. “Therefore, they have no right to come up with any conditions,” the Leader reiterated.

Imam Khamenei pointed to Washington’s past failures to hurt Iran's Islamic establishment as one of its numerous miscalculations concerning the country.

“One of those very first-class idiots had said two years ago that they would be celebrating the New Year in Tehran in January 2019,” Imam Khamenei noted.

“Now, that person has entered the dustbin of history and his boss [Trump] has been kicked out of the White House in a humiliating manner. By God’s grace, though, the Islamic Republic still stands tall,” the Leader noted.

In parallel, Imam Khamenei named the US support for the riots that broke out in Iran in 2009 as another instance of Washington’s miscalculations in its efforts to bring about the collapse of the Islamic Republic.

Washington’s excessive trust in the Pahlavi regime’s military, the Leader said, was yet another calculation that was proven wrong when the air force personnel turned their backs on the US-backed regime.

His Eminence described the officers deserting the army and joining the masses of revolutionary people as a “miracle-like” development that hugely contributed to the Revolution’s victory.

Meanwhile, Imam Khamenei also pointed to Trump’s chaotic final days in the White House, which culminated in the invasion of the Capitol Hill by his extremist supporters.

The Leader said the incidents were not to be underplayed and judged only in light of the twilight of an American president. Rather, those developments in fact marked “the twilight of America’s reputation, power, and social integrity,” he noted.

He advised the Iranian officials to always beware of the enemy and its error-riddled calculations and “constantly increase the constituents of national power.”

He hailed the recent back-to-back military exercises featuring the Army and Iran’s Islamic Revolution Guards [IRG] as attempts by “the children of this country to boost national security,” calling the maneuvers “a cause for pride.”

Imam Khamenei, meanwhile, denounced certain regional states for relying on extra-regional sources for their own security, noting that those very same foreign powers would desert them when their assistance is required.

The Leader cited the likes of Iran’s monarch including Egypt’s Hosni Mubarak or Tunisia’s Zine El Abidine Ben Ali as examples of regional rulers who mistakenly placed their trust in foreign powers.