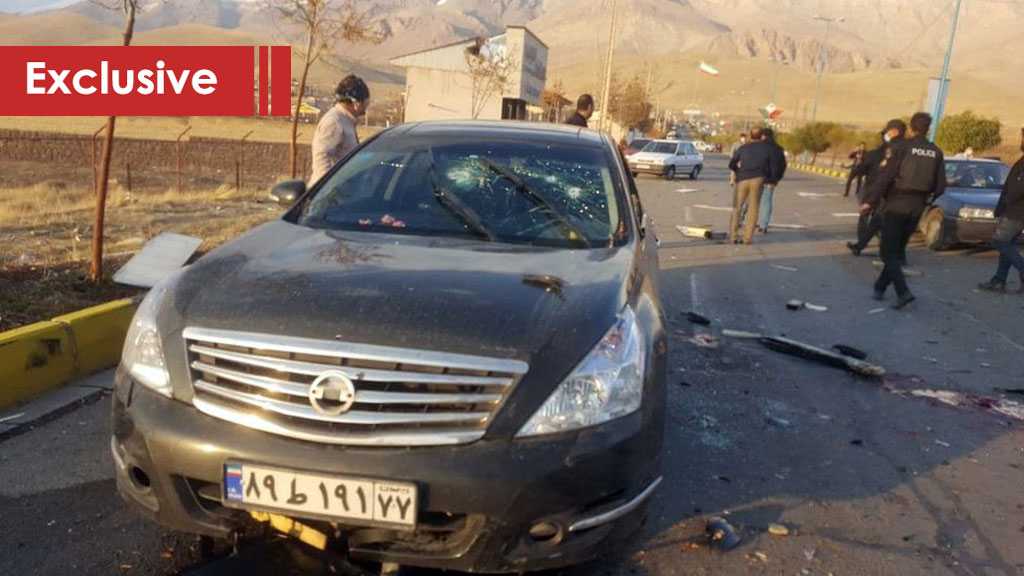 Tehran - On 21 November 2020, The Times of 'Israel' said that the 'Israeli' regime along with the US are planning ‘covert ops’ against Iran as Trump’s term ends. Only six days later, prominent Iranian physicist Mohsen Fakhrizadeh has been assassinated in a terrorist attack in Damavand area near the capital Tehran.

This crime comes as a desperate attempt to put more pressure on Tehran amid the constant US and allies attempts to hamper Iran from advancing in the different fields, including nuclear development for peaceful purposes. Iran’s Fars news agency reported that Fakhrizadeh had been targeted on Friday in an attack involving at least one explosion and shooting by a number of assailants in Absard city of Damavand County, Tehran Province.

The media office of Iran’s Defense Ministry said Fakhrizadeh, who headed the ministry's Organization of Defensive Innovation and Research [SPND], “was severely wounded in the course of clashes between his security team and terrorists and was transferred to hospital,” where he succumbed to his wounds and was announced as martyr.

Commenting on the topic, political analyst and University of Tehran Professor, Dr. Seyed Mohammad Marandi said “This assassination shows that western intelligence agencies and the terrorist organizations that they support such as the MEK along with the apartheid regime and the other regional actors are waging war against Iranian people.”

He explained “It is interesting when one remembers that every time a terrorist is arrested, or a terrorist is executed or a spy is captured, Western media immediately say that these people are innocent, and that they are hostages; as if they have some sort of special knowledge of what goes on behind the scenes. Yet it is these very same spies and terrorists that accumulate knowledge and carryout murder and destruction.”

“Nevertheless, this is an act of war, and the Iranians will make sure that its antagonists are punished as a result of the murder of this high ranking Iranian official,” Dr. Marandi noted.

Brigadier General Hossein Dehqan, military advisor to Leader of the Islamic Revolution His Eminence Imam Sayyed Ali Khamenei, vowed in his tweet a crushing response to the perpetrators.

The tweet read “We will come down hard on those who killed Martry Mohsen Fakhrizadeh, just like thunder and we will make them regret their deed. In the final days of their allied gambler’s political life, the Zionists are after intensifying pressure on Iran in order to trigger an all-out war.”

Also, Iran’s Chief of Staff Major General Mohammad Hossein Baqeri said in a statement that “The assassins of martyr Fakhrizadeh will see a harsh revenge,” promising that they will be punished. He also assured that the path Farikhzadeh started will never stop.

The political analyst pointed out that “It is ironic that when Western regimes claim that the Russians attempted to murder or assassinate an asset of theirs in the UK, the whole of NATO, Europe and North America is up in arms. But when an actual act of murder is carried out in Iran, Western media outlets gloat and try to show the victim as the guilty party rather than the terrorists and the regimes that stand behind those terrorists.”

Fakhrizadeh’s name was mentioned in a presentation in May 2018 by 'Israeli' Prime Minister Benjamin Netanyahu, during which he repeated baseless claims about the Iranian nuclear program. Netanyahu described the scientist as the director of Iran’s nuclear program and said, “Remember that name, Fakhrizadeh.”