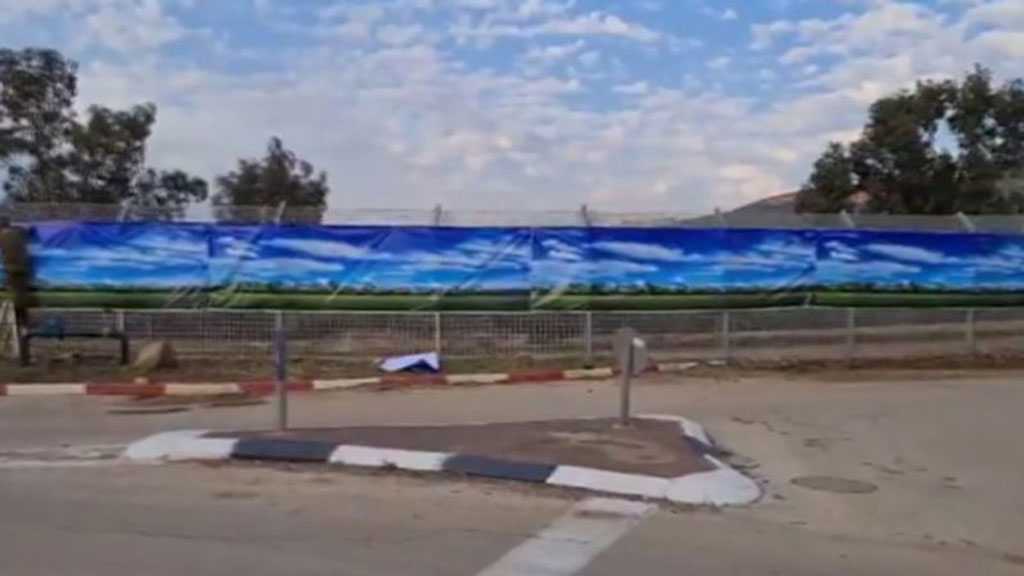 The “Israeli” army appears to have exhausted all camouflage options. It’s now resorted to using mere cloth along the Palestinian-Lebanese border. Settlers in the Metula settlement noticed enemy soldiers extending a large canvas over the border fence. The canvas hosts a painting of the sky and the local landscape.

“Israel’s” Channel 12 website indicated that the surprising move is aimed at camouflaging the fence or hiding the “Israeli” territory behind it. But the settlers there are suspicious.

“Over the years, the ‘residents’ of Metula have gotten used to Hezbollah placing a kind of large canvas with messages along the fences on the Lebanese side of the frontier, and this is the first time that the ‘Israeli’ army hung similar signs on the fence,” the website stated.

Gil, an “Israeli” student who lives in Metula, told the website that she arrived morning to see the work getting underway and was disappointed when she discovered that this is what is happening in the area.

“It really interferes with the landscape scenery. It is ugly and also unnecessary," she said.

Another student stated that “in Metula we live in peace with the fence, and we even have the view of Wadi al-Oyoun behind it. Everybody knows that there is a fence, and there is no need to hide it. Whoever believes that this will help prevent a retaliatory operation by Hezbollah, should know that every time I take out the garbage, it will make me laugh."

The website stated that Zionist officials had previously opposed continuing the construction of a concrete wall in the northern and eastern part of the settlement. In the past, they hung a camouflage net on the fence that helped hide “civilian and military” activities.

However, following the martyrdom of a Hezbollah fighter in Syria last summer and the party’s threat to retaliate, soldiers were prevented from approaching the area and even set up many checkpoints to prevent the entry of military vehicles and soldiers in uniform until recently when activities returned to normal, and on Wednesday, colorful cloth was hung.

For his part, the spokesman for the occupation army said, “The army placed a new camouflage canvas in the area of the Metula settlement instead of the old camouflage network that was in place, and there is talk about installing a routine infrastructure that serves the army's activities by taking into account the civilian element.”