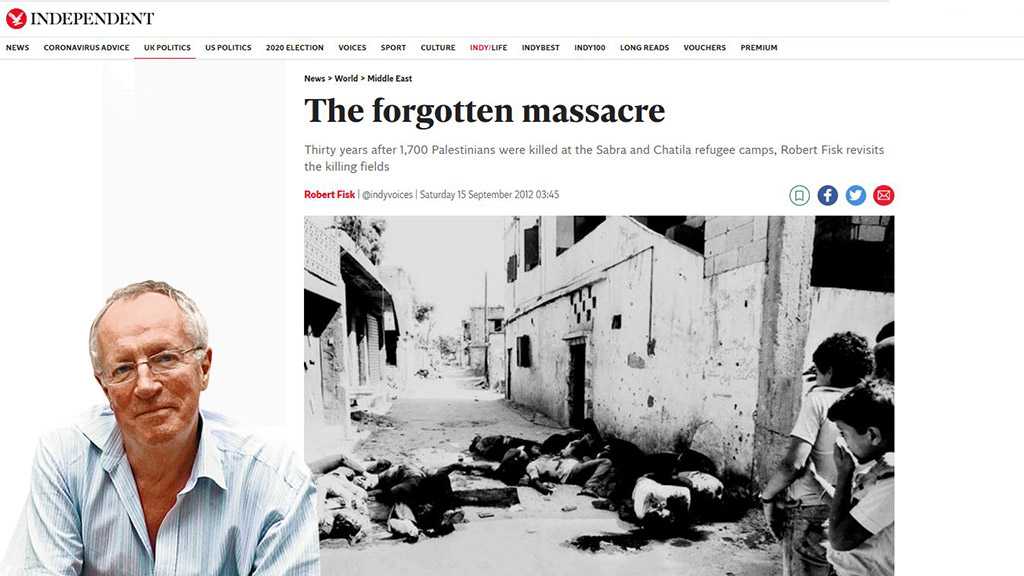 In memory of Robert Fisk, a journalist who was “renowned for his courage in questioning official narratives” and publishing “frequently brilliant prose”.

During his decades-long career, Fisk covered key international events including the Lebanese civil war, the Soviet invasion of Afghanistan, the Iranian revolution, Saddam Hussein’s invasion of Kuwait, conflicts in the Balkans and the Arab Spring.

Fisk was particularly renowned for his war reporting.

The memories remain, of course. The man who lost his family in an earlier massacre, only to watch the young men of Chatila lined up after the new killings and marched off to death. But – like the muck piled on the garbage tip amid the concrete hovels – the stench of injustice still pervades the camps where 1,700 Palestinians were butchered 30 years ago next week. No-one was tried and sentenced for a slaughter, which even an “Israeli” writer at the time compared to the killing of Yugoslavs by Nazi sympathizers in the Second World War. Sabra and Chatila are a memorial to criminals who evaded responsibility, who got away with it.

Khaled Abu Noor was in his teens, a would-be militiaman who had left the camp for the mountains before “Israel's” Phalangist allies entered Sabra and Chatila. Did this give him a guilty conscience, that he was not there to fight the rapists and murderers? "What we all feel today is depression," he said. "We demanded justice, international trials – but there was nothing. Not a single person was held responsible. No-one was put before justice. And so we had to suffer in the 1986 camps war [at the hands of Shia Lebanese] and so the “Israelis” could slaughter so many Palestinians in the 2008-9 Gaza war. If there had been trials for what happened here 30 years ago, the Gaza killings would not have happened."

He has a point, of course. While presidents and prime ministers have lined up in Manhattan to mourn the dead of the 2001 international crimes against humanity at the World Trade Centre, not a single Western leader has dared to visit the dank and grubby Sabra and Chatila mass graves, shaded by a few scruffy trees and faded photographs of the dead. Nor, let it be said – in 30 years – has a single Arab leader bothered to visit the last resting place of at least 600 of the 1,700 victims. Arab potentates bleed in their hearts for the Palestinians but an airfare to Beirut might be a bit much these days – and which of them would want to offend the “Israelis” or the Americans?

It is an irony – but an important one, nonetheless – that the only nation to hold a serious official enquiry into the massacre, albeit flawed, was “Israel”. The “Israeli” army sent the killers into the camps and then watched – and did nothing – while the atrocity took place. A certain “Israeli” Lieutenant Avi Grabowsky gave the most telling evidence of this. The Kahan Commission held the then “defense” minister Ariel Sharon personally responsible, since he sent the ruthless anti-Palestinian Phalangists into the camps to "flush out terrorists" – "terrorists" who turned out to be as non-existent as Iraq's weapons of mass destruction 21 years later.

Sharon lost his job but later became prime minister, until broken by a stroke which he survived – but which took from him even the power of speech. Elie Hobeika, the Lebanese Christian militia leader who led his murderers into the camp – after Sharon had told the Phalange that Palestinians had just assassinated their leader, Bashir Gemayel – was murdered years later in east Beirut. His enemies claimed the Syrians killed him, his friends blamed the “Israelis”; Hobeika, who had "gone across" to the Syrians, had just announced he would "tell all" about the Sabra and Chatila atrocity at a Belgian court, which wished to try Sharon.

Of course, those of us who entered the camps on the third and final day of the massacre – 18 September, 1982 – have our own memories. I recall the old man in pajamas lying on his back on the main street with his innocent walking stick beside him, the two women and a baby shot next to a dead horse, the private house in which I sheltered from the killers with my colleague Loren Jenkins of The Washington Post – only to find a dead young woman lying in the courtyard beside us. Some of the women had been raped before their killing. The armies of flies, the smell of decomposition. These things one remembers.

Abu Maher is 65 – like Khaled Abu Noor, his family originally fled their homes in Safad in present-day “Israel” – and stayed in the camp throughout the massacre, at first disbelieving the women and children who urged him to run from his home. "A woman neighbor started screaming and I looked out and saw her shot dead and her daughter tried to run away and the killers chased her, saying "Kill her, kill her, don't let her go!" She shouted to me and I could do nothing. But she escaped."

Repeated trips back to the camp, year after year, have built up a narrative of astonishing detail. Investigations by Karsten Tveit of Norwegian radio and myself proved that many men, seen by Abu Maher being marched away alive after the initial massacre, were later handed by the “Israelis” back to the Phalangist killers – who held them prisoner for days in eastern Beirut and then, when they could not swap them for Christian hostages, executed them at mass graves.

And the arguments in favor of forgetfulness have been cruelly deployed. Why remember a few hundred Palestinians slaughtered when 25,000 have been killed in Syria in 19 months?

Supporters of “Israel” and critics of the Muslim world have written to me in the last couple of years, abusing me for referring repeatedly to the Sabra and Chatila massacre, as if my own eye-witness account of this atrocity has – like a war criminal – a statute of limitations. Given these reports of mine [compared to my accounts of Turkish oppression] one reader has written to me that "I would conclude that, in this case [Sabra and Chatila], you have an anti-“Israeli” bias. This is based solely on the disproportionate number of references you make to this atrocity…"

But can one make too many? Dr. Bayan al-Hout, widow of the PLO's former ambassador to Beirut, has written the most authoritative and detailed account of the Sabra and Chatila war crimes – for that is what they were – and concludes that in the years that followed, people feared to recall the event. "Then international groups started talking and enquiring. We must remember that all of us are responsible for what happened. And the victims are still scarred by these events – even those who are unborn will be scarred – and they need love." In the conclusion to her book, Dr. al-Hout asks some difficult – indeed, dangerous – questions: "Were the perpetrators the only ones responsible? Were the people who committed the crimes the only criminals? Were even those who issued the orders solely responsible? Who in truth is responsible?"

In other words, doesn't Lebanon bear responsibility with the Phalangist Lebanese, “Israel” with the “Israeli” army, the West with its “Israeli” ally, the Arabs with their American ally? Dr al-Hout ends her investigation with a quotation from Rabbi Abraham Heschel who raged against the Vietnam war. "In a free society," the Rabbi said, "some are guilty, but all are responsible”. 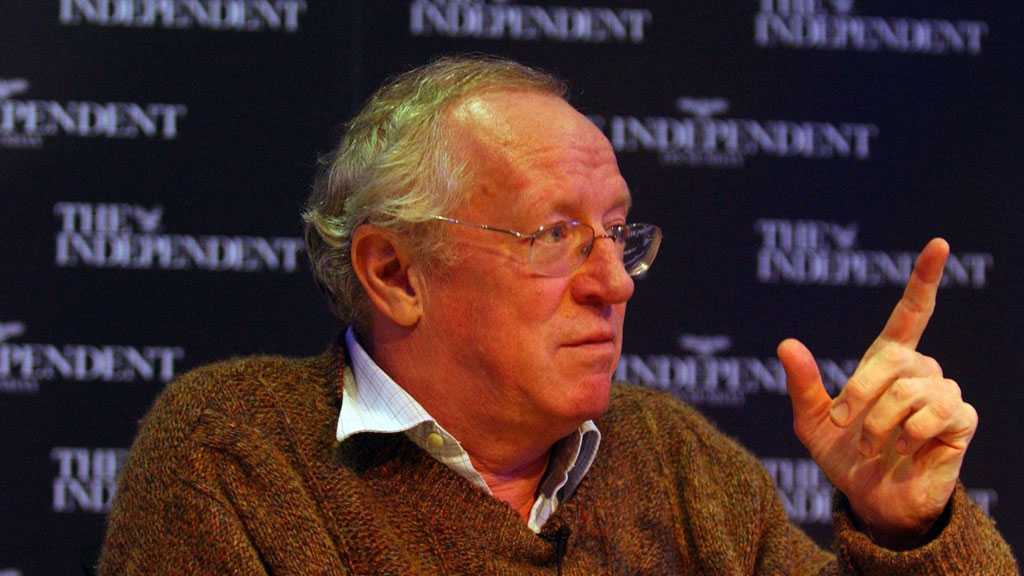 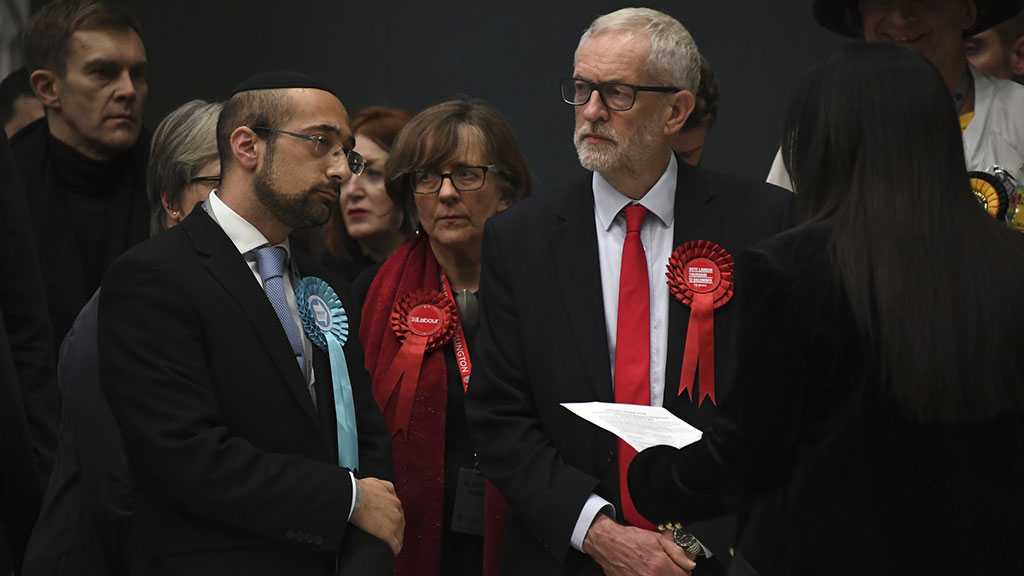 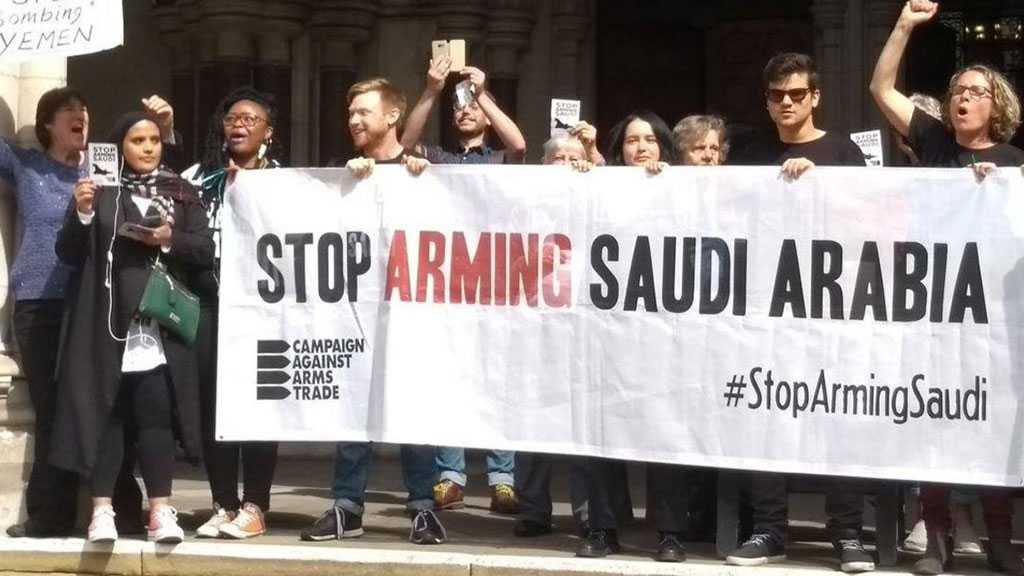