Beirut-Hezbollah Secretary General His Eminence Sayyed Hassan Nasrallah delivered on Tuesday a televised speech in which he tackled various internal and regional issues.

At the beginning of his speech, Sayyed Nasrallah offered condolences to Kuwait and its people over the demise of Emir Sheikh Sabah al-Ahmed al-Sabah. “The late Kuwaiti leader played a personal and major role in ending Lebanon’s civil war. The Lebanese people neither forget the role of the late Emir in ending the civil war, nor the Kuwaiti role during the July 2006 war, supporting Lebanon and reconstructing it” he said, noting that “Kuwait still maintains its honorable stance towards Al-Quds and Palestine, unlike the train of normalization.”

Meanwhile, His Eminence praised the coherent stance of Kuwait under its late Emir against pressures on Gulf nations to join normalization with the Zionist entity.

On another level, Sayyed Nasrallah hailed the efforts and sacrifices of the Lebanese army and forces that had recently confronted the armed terrorist groups in Northern Lebanon. “The armed groups in north Lebanon were plotting major military action against the country.”

He further offered condolences to the Lebanese army and the families of the martyrs that have fallen in the battle. “We have previously warned against the attempts to revive Daesh [Arabic Acronym for the terrorist ‘ISIS’/’ISIL’ group] again in Iraq and Syria, and it is natural that preparations began in Lebanon to justify the American forces' presence in the region,” His Eminence added, pointing out that “After the assassination of martyrs [Qasim] Soleimani and [Abu Mahdi] al-Muhandis, Washington started reviving Daesh.”

In parallel, the Resistance Leader declared Hezbollah appreciates the popular position in the north and the people's rallying around the army and security forces.

According to His Eminence, “Washington is trying to justify its continuous presence in the region under the pretext of the international coalition to fight Daesh, which it seeks to revive in the region.”

On another level, Sayyed Nasrallah underscored that “The “Israeli” enemy's army is still at the highest level of alert and is still hiding, and this is the longest period that the occupation army lives in this way without having its soldiers moving [from their places].”

Reiterating that Hezbollah still intends to retaliate to the martyrdom of one of its fighters in Syria, the Resistance Leader responded to “Israeli” PM Benjamin Netanyahu’s claims that Hezbollah is storing missiles near a gas station.

On this level, Sayyed Nasrallah announced that Hezbollah Media Relations is to invite local media outlets to the site at 22:00, to let the world discover his lies.

“We’re not obliged to invite journalists to any site mentioned by Netanyahu, but we are doing this now due to the sensitivity of the situation after the August 4 explosion,” he stressed, noting that c.”

According to His Eminence, “Our measure is to make the Lebanese people aware amid the battle of consciousness, and to let them know that we don't put our missile between residential houses.”

On the political front, Sayyed Nasrallah highlighted that “The French initiative was published and we all agreed on it. We said we support it. The first step was to name a PM.”

“The work has started and the parliamentary blocs started to consult to agree on naming Hariri or whomever he names. Meanwhile, the club of the four former PMs was formed. We did not put any conditions when Mustafa Adib was nominated and did not make any prior agreement to show our intention to facilitate the process,” he recalled.

His Eminence went on to say, “There are those who said that the designated PM would hold negotiations, but the parliamentary blocs and the president of the republic have not been contacted.”

Moreover, Hezbollah Secretary General disclosed that “Adib did not consult with the President of the Republic, a prepared file was handed to him, and the most important authority for the President- i.e. to participate in forming the government- would have been dropped out.”

“The French must know where they erred, especially as to eliminating the President's most important remaining power, which is participation in the formation of governments,” he added, noting that “The one who negotiated with us over the government wasn’t Adib, but PM Saad Hariri.”

Sayyed Nasrallah also mentioned that “The naming of ministers for all sects in Lebanon by a single person is dangerous for the country. The Ex-PMs club wanted to distribute portfolios and name the ministers alone.”

“Some wanted to eliminate the parliamentary blocs and the President’s powers and they sought to introduce new norms,” he stated, pointing out that “When we asked whether the French initiative included what was proposed by the club of ex-PMs, we were answered by ‘NO’.”

In addition, Sayyed Nasrallah confirmed that “We rejected what was presented to us because it forms a threat to the country and is not a subject of discussion. The French initiative neither mentions the number of ministers nor the rotation of portfolios.”

His Eminence underlined that “At one point there was an attempt to form a de-facto government. The way things were tackled with regard to the government is unacceptable in Lebanon, regardless of its sponsor or supporter.”

“We have always said that the reason for our presence in the government is to protect the back of the resistance,” he added, warning that “The coercion method does not work in Lebanon, regardless of its advocates and sponsors, be them the US, France or Europe.”

On the same level, Sayyed Nasrallah reminded that Hezbollah “must be in the government to protect the back of the resistance so that May 5, 2008 will not be repeated in Lebanon,” noting that “The second reason behind our participation in the government is fearing for what has remained from Lebanon economically, nationally and on all other levels.”

“What if a government accepts the conditions of the IMF without any discussions? Do we agree on a government that increases taxes on citizens? What if a new government decides to sell the state's assets,” he asked, statin, “We fear for the state property and people's money.”

Meanwhile, His Eminence addressed the French President Emanuel Macron by saying: “Did the French initiative say that the ex-PMs form the government and name ministers? Hajj Mohammad Raad told Macron that we agree to 90% of the French initiative, and here we ask, what is it that we agreed upon and did not respect? What you are asking from us contradicts with democracy. You are asking the parliamentary majority to bow and cede power to the parliamentary minority.”

To Macron, Sayyed Nasrallah sent a clear message: “Look for the party that wanted to control the country and eliminate the political forces under your cover. President Macron, who accused us of intimidation, is the one who practiced the intimidation policy against the heads of parties in order to pass the government.”

He also emphasized that Hezbollah “prevented the country from moving towards the worse, and we hope that the Lebanese will cooperate so that the country doesn’t move into the worst.”

Explaining that Hezbollah has not committed to hand over the country to any kind of government, he told the French President: “We know how we adhere to our promises, fulfill it and sacrifice in order to abide by it. Our enemies and friends know that we honor our pledges. We upset our friends to fulfill our promises.”

Once again, he repeated that Hezbollah “did not go to Syria to fight civilians. We went there at the invitation of the Syrian government to fight the groups that you named as terrorists.”

“It was not us who chose war, the Zionists rather occupied our land and attacked us,” he told Macron, stressing that “We do not accept that anyone speaks to us in this language. A settlement is different than surrender. We do not practice the game of terrorism and intimidation against anyone in Lebanon. We do not practice intimidation, but Arab countries that you protect and are friendly to you, doesn’t allow a tweet that criticizes the king to be written.”

In addition, Sayyed Nasrallah said: ‘Iran doesn’t interfere in Lebanon, and we in Hezbollah and Amal Movement decide what to do.”

He further sent the French President a clear advice: “If you want to search for those who thwarted your initiative, look for the Americans who imposed sanctions and complicated the situation.”

In a sounding message, His Eminence stated: “We do not accept the arrogant behavior and that you accuse us and other Lebanese with committing treason. We welcomed the role of President Macron and the French initiative to help Lebanon but not to be an Attorney General, inspector, judge, guardian or governor of Lebanon. There isn't any mandate neither for the French president nor for others to be guardian or ruler of Lebanon.”

However, Sayyed Nasrallah kept the door open for discussion: “We still support the French initiative, but the language must be reconsidered because what was attacked the last two days ago is the national dignity,” he said, noting that “We are still open to the French initiative for the benefit of our country, and we insist on cooperation to pass from bad to good.”

On another level, Sayyed Nasrallah hailed the stance of the Bahraini people despite oppression and risks, particularly the Bahraini scholars’ rejection of Al-Khalifa regime’s normalization with the “Israeli” enemy.

“The stance of the Bahraini people is honorable and [truly] represents the people of Bahrain. The authority in Bahrain doesn't own its decision, it rather operates as a Saudi-affiliated state,” he said, pointing out that “The people of Bahrain, despite their wounds, and despite the presence of many of their leaders and symbols behind bars, have said their resounding word of truth in the era of silence, subservience and submission.”

He also warned of Sudan’s move towards normalization.

In addition, Sayyed Nasrallah hailed the official and popular stances of Tunisia and Algeria against the normalizations, and urged the Sudanese people not to accept being part of the normalization under the pretext of lifting its name from the “terror list”.

“We're not worried about all what is happening in the region as long as the Palestinian people keep adhering to their rights,” he assured. 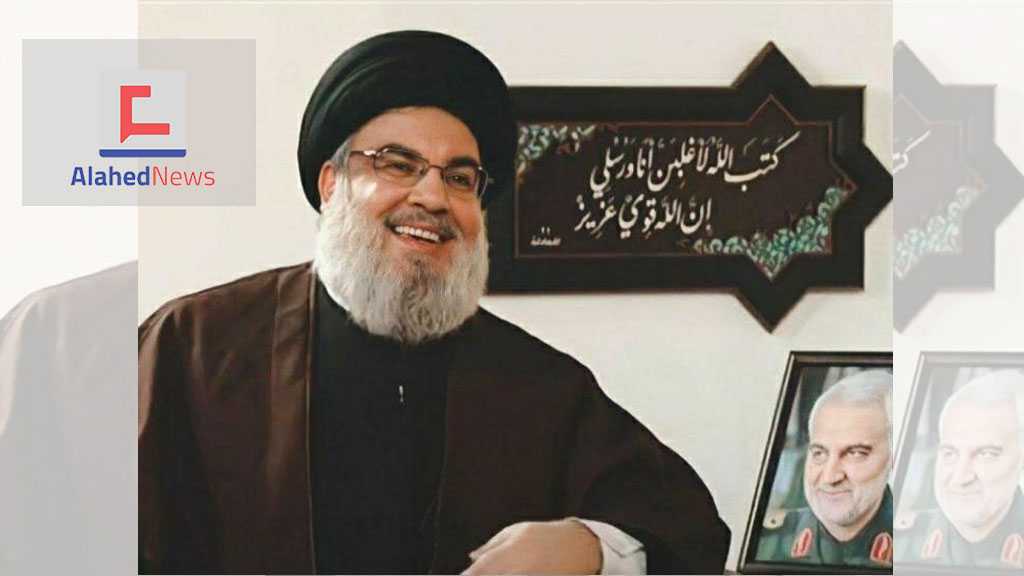 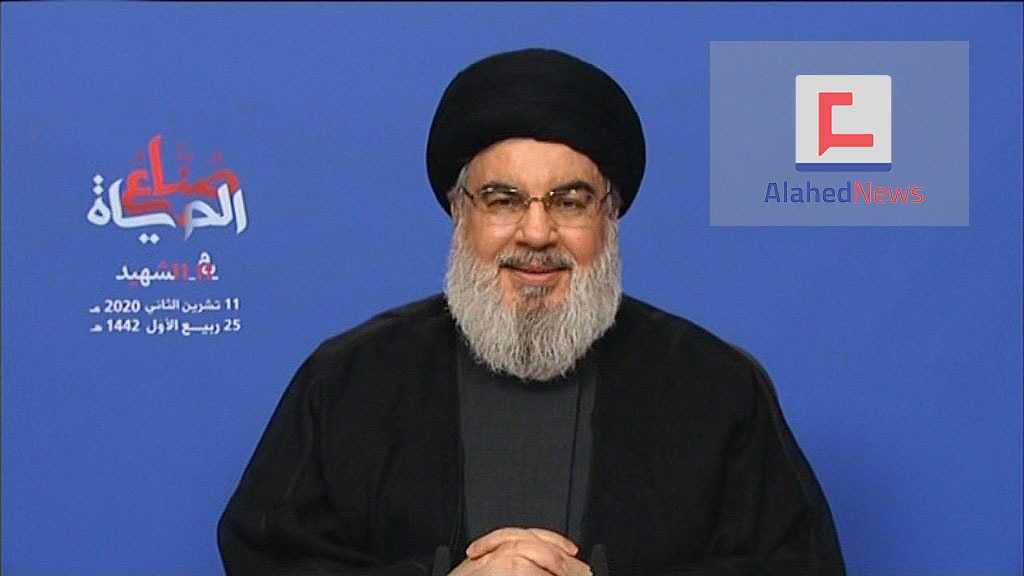 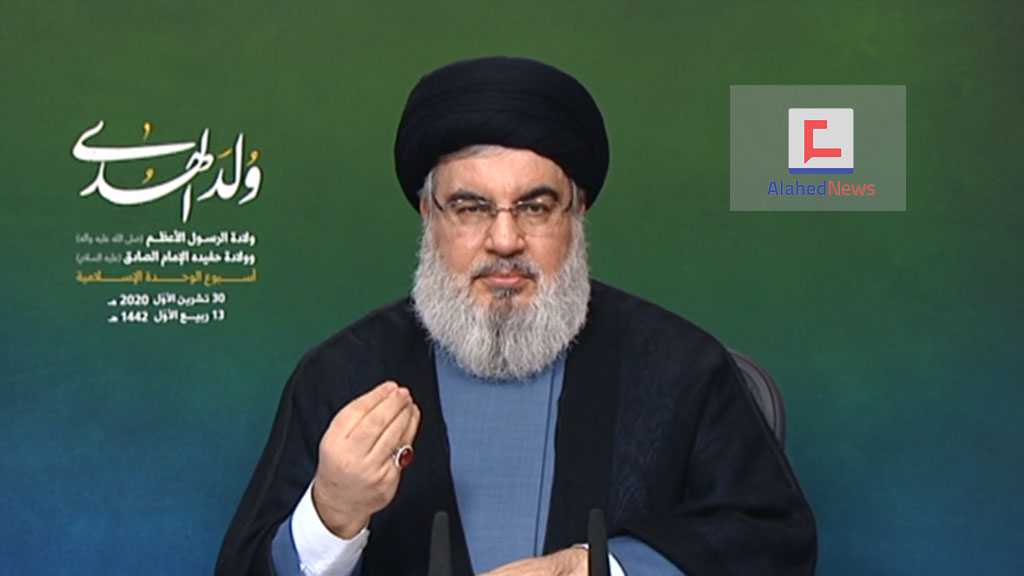