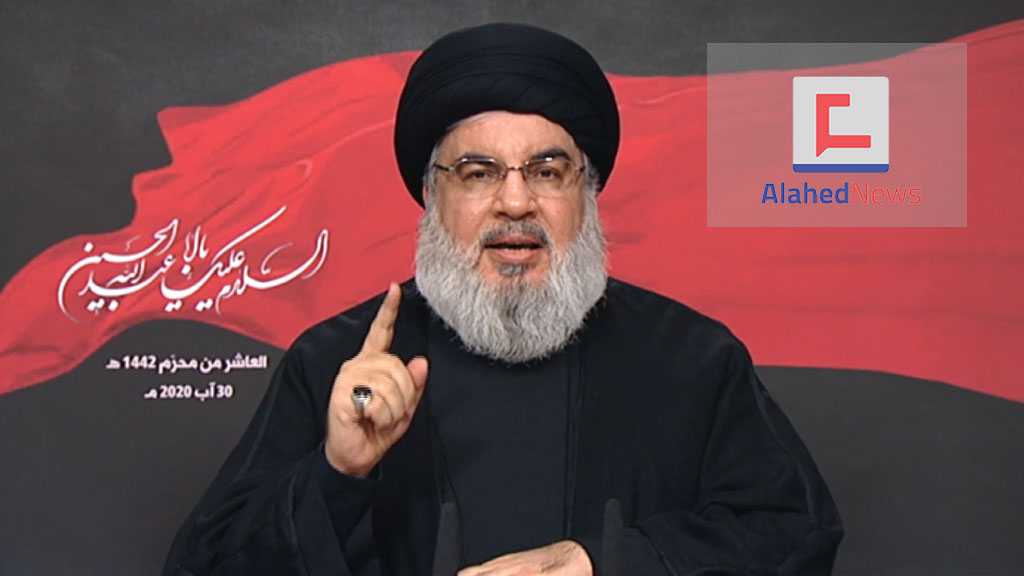 Beirut - Hezbollah Secretary General His Eminence Sayyed Nasrallah delivered on Sunday a televised speech on the 10th of Muharram.

Condoling the Muslim world commemorating the martyrdom of Imam Hussein (AS), Sayyed Nasrallah lamented the scene today as “sad and different as the Lebanese streets and yards are empty due to Covid-19 pandemic.”

On Imam Hussein’s day, His Eminence recalled that “when being obliged to choose between humiliation and war, we say: Far from us is disgrace.”

“We, in Hezbollah, and on the 10th of Muharram affirm that we would never accept the existence of the false “Israeli” entity even if the whole world recognized it,” he stated, reiterating Hezbollah’s support to anyone who fights it.

His Eminence further highlighted that “There is a clear and unambiguous right of the Palestinian people’s right in all of Palestine from the sea to the river.”

“We stress the right of the Syrian people in the occupied Golan, and the right of the Lebanese people to liberate their occupied lands,” the Resistance Leader underlined, noting that “We will remain to support everyone who faces the “Israeli” entity’s occupation to the Palestinian, Syrian and Lebanese territories.”

According to His Eminence, “The peoples in our region want to enjoy living in dignity and freedom, away from the US administration that works to practice hegemony and impose governments on peoples.”

“In the imposed war on Yemen, the Saudis and Emiratis are the tools in the hands of the Americans as they implement the US’ wishes and decisions,” he emphasized, pointing out that “Today’s clear and explicit falsehood is represented by the US, which plunders people’s wealth and money.”

Sayyed Nasrallah also mentioned that “One of the greatest manifestations of the US aggression, greed and intervention in our region is represented by the continuous aggression against Iran through imposed wars, sanctions, sieges and schemes.”

Condemning all attempts to recognize "Israel" from any side, the Resistance Leader slammed any form of normalization with this entity.

“We reiterate our condemnation to the position of some UAE’s officials, whom Netanyahu did not respect, and any agreement of this kind is a treason,” he viewed, assuring that “As we have triumphed during all the past years in Lebanon, Palestine, Yemen, Syria Iraq and Iran, the future of this conflict is the victory that is inevitably coming. It is a matter of time.”

On “Israeli” PM Benjamin Netanyahu's stance rejecting the sale of F-35s to the UAE, Sayyed Nasrallah said: ““Israel” does not trust the UAE or any other nation in the region.”

“What the UAE did is a free service for [US President Donald] Trump and Netanyahu in their worst political days,” His Eminence underscored.

Moving to the internal arena, Sayyed Nasrallah hoped that in the coming hours a PM is named and a government is formed to achieve reforms

In addition, His Eminence announced “Hezbollah’s support for reforms in Lebanon to the maximum level,” warning of vacuum.

“Claims that Hezbollah is impeding reforms are mere lies,” he mentioned, noting that “We will cooperate to pull our country out of any governmental vacuum.”

On the calls for political change on the internal political arena, Sayyed Nasrallah viewed that "The International calls for meeting the demands of the Lebanese people are excellent.”

However, he asked “Who sets the criterion? Are popular protests and street presence the criterion for reflecting popular demands? Shall we organize a referendum?”

In response, His Eminence went on to say: “No one in Lebanon not a religious authority nor any political leader can say this is the will of the Lebanese people.”

“We can say that we are the biggest political party in Lebanon with the biggest number of supporters, but we do not claim that we represent the entire Lebanese people,” he stressed, pointing out that “We in Hezbollah express the will of the people we represent.”

“There is a problem in the Lebanese political culture,” His Eminence affirmed, unveiling that “Hezbollah is open to any calm discussions in the regard, of a new political contract, but we have a condition that the discussions should enjoy the consensus of all components.”

He also recalled that “Years ago, I mentioned a constituent assembly to improve the Taif Accord and we remember the internal sides’ reactions that occurred.”

Regarding Beirut Port blast, Sayyed Nasrallah called on the “Lebanese Army to announce the results of the technical investigation into the Beirut Port incident, because announcing the results will end the campaign of lies and slander.”

“We stress that the judiciary should firmly follow up on the port blast,” he said, asserting that “The blood of martyrs should not go in vain.”

Meanwhile, Sayyed Nasrallah warned that “There is a new attempt to reproduce Daesh [Arabic acronym for ‘ISIS/ISIL] in Iraq, Syria and east of the Euphrates.”

In addition, he highlighted “the depth of the relation between Hezbollah and the Amal Movement.”

“The memory of the kidnapping of Imam al-Sadr and his two companions is a comprehensive national memory, Imam al-Sadr is the imam of the resistance.”

On “Israel's” raid that martyred the Resistance man- Ali Mohsen-in Syria, His Eminence reiterated Hezbollah’s equation: “Our objective is not revenge, but punishment and to establish a balance of deterrence.”

““Israel”, on its own, just after Hezbollah’s statement mobilized its forces and upped its measures on the Lebanese and Syrian borders. “Israel” is now sending remote control vehicles carrying dummies to give the Resistance targets to hit,” the Resistance Leader declared.

To the “Israelis”, Sayyed Nasrallah sent a sounding message: “I’ll be very clear, the “Israelis” must understand that whenever they kill one of our mujahideen, we will kill one of their soldiers. For us, the decision to respond to the “Israeli” is a categorical and decisive one. Frankly, we are not in a hurry.”

“The issue of “Israel’s” targeting a house in the village of Al-Habaria is a subject to response, and all the threats from Netanyahu, Gantz and Kochavi will not deter us,” he confirmed, telling the “Israeli: “Your soldiers will eventually appear on the roads.” 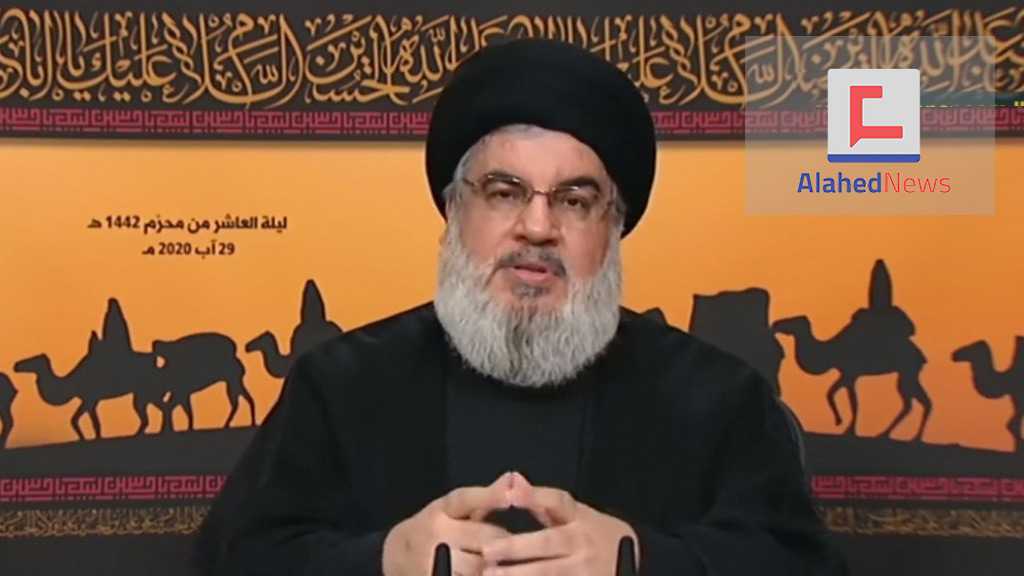 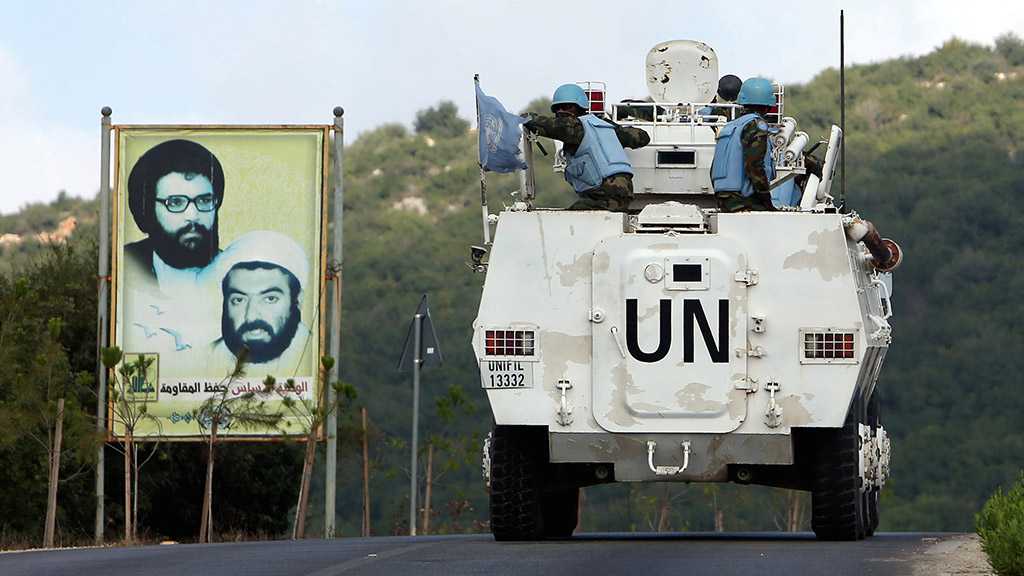 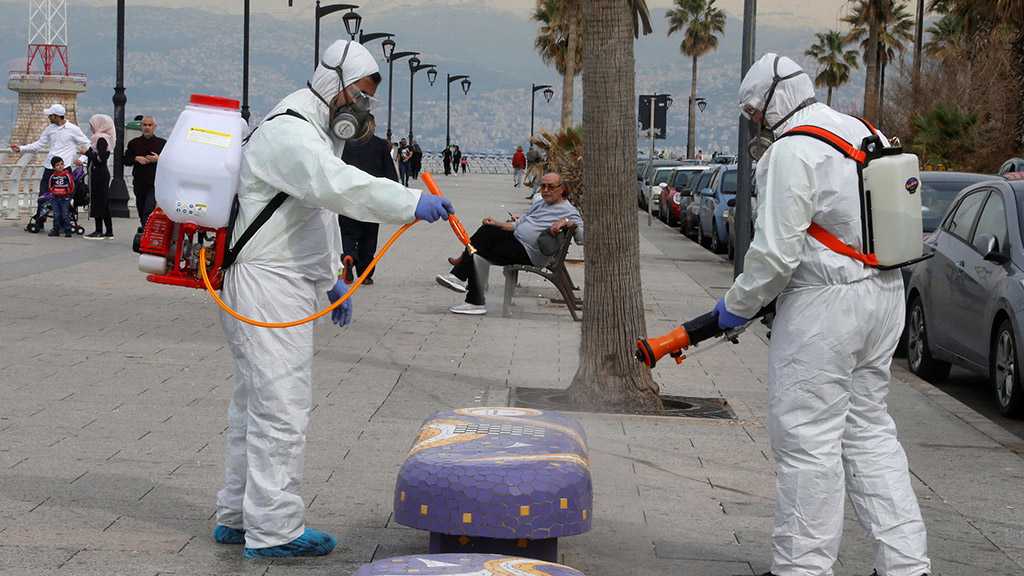