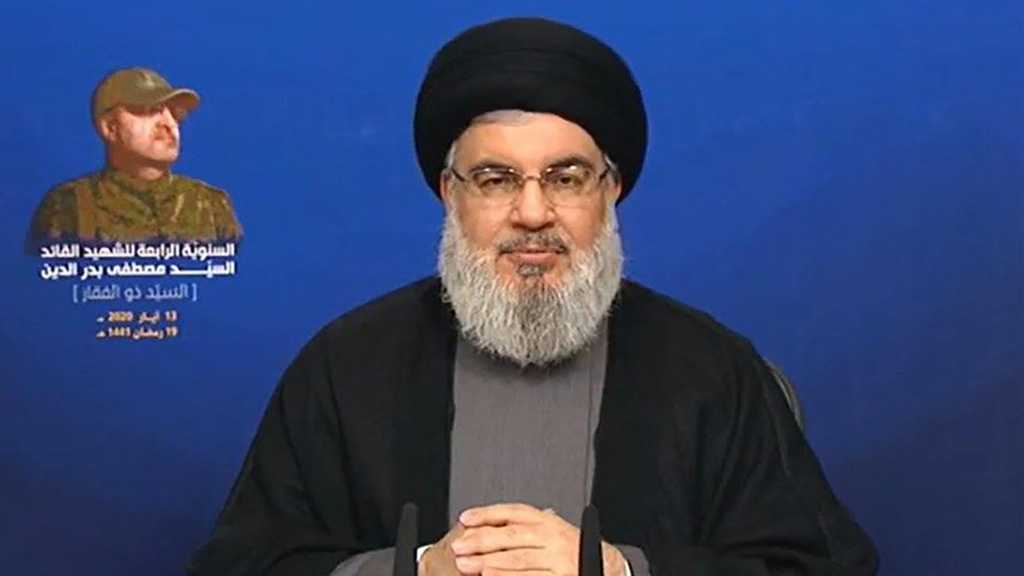 At the beginning of his speech, Sayyed Nasrallah condoled the Muslim World on the martyrdom anniversary of Imam Ali (AS). He further denounced the terrorist attacks that target funerals in Afghanistan.

Meanwhile, His Eminence congratulated the nurses on their day, hailing their efforts and steadfastness in facing Covid-19. “The battle against Coronavirus depends on the certainty, knowledge and solidity of the medical teams and their steadfastness on the front lines of this confrontation,” he added.

Back to the April 1996 war, Sayyed Nasrallah said that the “Martyr Leader Badreddine was the Resistance’s commander-in-chief and had a major role in the victory.”

“Despite the sacrifices, Lebanon and Syria were able to attain victory and to impose on the “Israeli” enemy what was called then the April Understanding,” His Eminence recalled, clarifying that “Martyr Leader Badreddine represented Hezbollah in the battle in Syria alongside the Syrian army, the Iranian brothers, and the other resistance factions.”

According to His Eminence, “The real scheme in Syria was a US-“Israeli”-Saudi one and other nations joined them.”

“Based on the American-Saudi scheme, the problem with Syria was that it was outside the American-“Israeli” hegemony,” he stated, underlying that “This year, more than any other year, we are witnessing the abandoning of Palestine and its cause by the Arab regimes.”

On this level, the Resistance Leader underlined that “Their problem with Syria was not a problem of a person, and they did not mind that President [Bashar] Al-Assad would continue to preside over Syria if he had accepted to switch his identity and location as part of the Resistance axis.”

“Syria represents a major problem to the US-“Israeli”-Saudi scheme aimed at imposing domination on the region,” he confirmed, noting that “Syria refused to submit to all pressures, so the arrogant powers and its tools around the world decided to pressure and seize it.”

Sayyed Nasrallah went on to say: “The US-“Israeli”-Saudi scheme was set for Syria to make it give up Palestine and the Golan Heights.”

Regarding Hezbollah’s participation on the Syrian front, His Eminence stressed that Hezbollah “had to take the initiative to go to Syria to face the conspiracy, despite our awareness of the consequences of this decision.”

“We knew that our intervention in Syria would lead to hefty sacrifices and that it would have repercussions in Lebanon, but we realized that the threats facing Lebanon, Palestine, Syria and the resistance were much bigger than these sacrifices and losses and that's why we went there,” he emphasized, noting that “Our leader in Syria battles was the martyr Leader Mustafa Badreddine, who spent his last days of the Jihad journey there. Sayyed Mustafa Badreddine was fighting shoulder-to-shoulder in Syria with the martyr commander Hajj Qassem Soleimani.

Announcing the victory in Syria battle, Sayyed Nasrallah clearly said: “Today, we can say that Syria has triumphed in this war. It has overcome the fragmentation scheme.”

“Syria was able to win the war due to the steadfastness of its leadership, people and army,” he declared, noting that “They try to achieve politically what they failed to achieve militarily in Syria.”

However, His Eminence underscored that “Syria has succeeded so far in the political battle despite the psychological war and the blockade it is facing.”

On the “Israeli” involvement on the war against Syria, Sayyed Nasrallah underlined that the apartheid “Israeli” entity has been strongly involved in the war in Syria since 2011. ““Israel” is still fighting some battles in Syria but it has lost the war.”

“Regarding sanctions and siege, the bet is on the steadfastness of the leadership and the Syrian people,” he confirmed, highlighting that “Hezbollah and the resistance factions have come and fought in Syria, and Iran is not fighting for influence. It has neither a problem with Russia nor ambitions in Syria. It is perfectly natural for allies to have different estimations, but there is no conflict between the allies in Syria at all.”

According to His Eminence, “Iran's goal in Syria is to prevent its fall in the domination of America and “Israel”. It never interferes in Syria's internal affairs. Iran's goal is to preserve the identity of Syria, and its decision is decisive in standing with the Syrian leadership and supporting its decisions and stability.”

“There are Iranian military advisers in Syria, not Iranian forces,” he stressed, adding that “These Iranian advisers oversee Syrian, Arab and Muslim volunteers.”

Reiterating that ““Israel” is scared and worried in Syria,” the Resistance Leader mentioned that “The “Israelis” have bet on the armed groups since the start of the war on Syria, and they were strongly present in the war on Syria.”

“The Zionist entity is terrified from the developments in Syria, which may take it to an uncalculated adventures,” he said, noting that “The “Israelis” are attacking everything related to missile manufacture in Syria.”

Sayyed Nasrallah also urged the “Israelis” to “realize that their authorities are telling them bald-faced lies, and that any folly committed by their commanders could plunge the region into an all-out war.”

Moreover, Hezbollah Secretary General stated that ““Israel” is fighting a delusional battle in Syria against supposed Iranian forces who are not present there. The idiot “Israeli” war minister has promised to drive the Iranians out of Syria before the end of this year.”

Declaring that “The withdrawal of Hezbollah and other fighters from some areas in Syria has nothing to do with the “Israeli” strikes, “ Sayyed Nasrallah noted that “He who is besieging Iran, Syria, Venezuela, Gaza and Yemen has begun to suffer from the consequences of Coronavirus.”

On the internal Lebanese front, Hezbollah Secretary General viewed that “The issue of smuggling and illegal crossings on the borders with Syria cannot be solved by Lebanon alone. Smuggling is a problem, but Lebanon can’t handle it alone. It has been a historic problem since the establishment of Greater Lebanon. The two countries governments must cooperate to stop the issue.”

In addition, His Eminence highlighted that “The Lebanese Army cannot alone prevent cross-border smuggling and the only way to achieve this is through bilateral cooperation between the two armies.”

Sayyed Nasrallah further cautioned that “Lebanon could not depend on the United States, European and Arab countries as they are grappling with their own economic crises due to the spread of the coronavirus pandemic.”

“Lebanon needs a sovereign decision with Syria that transcends regional and international considerations and hatred,” he stressed, adding that “Lebanon would not be able to export its agricultural and industrial products to Arab countries without going through Syria.”

Urging some Lebanese sides to “Drop their long-standing bets on a regime change in Syria, saying the Syrian Army and people had won the war,” His Eminence unveiled that “Syria is ready to rearrange the relationship with Lebanon which bears responsibility for the delay and procrastination in this.”

In parallel, the top Hezbollah Leader strongly rejected calls for the deployment of UN troops along the Lebanese-Syrian borders to stop smuggling. “Talk of UN forces on the Lebanese-Syrian border aims to achieve the objectives of the “Israeli” July 2006 war on Lebanon. We can never accept the presence of UN troops on the border with Syria. This was one of the most important conditions of the July aggression.”