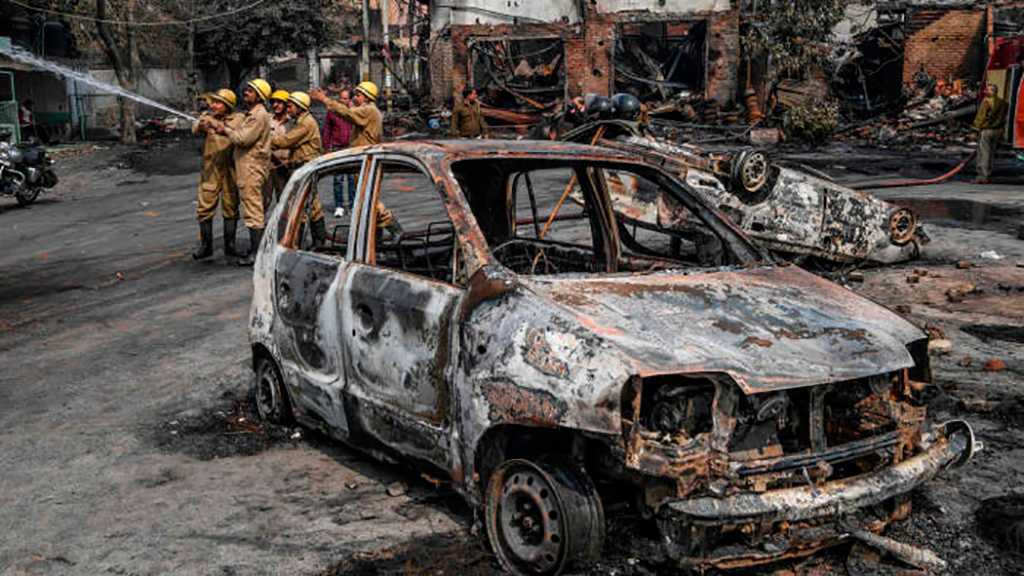 Yasmin, a 35-year-old mother of three, clutched her blue-and-white prayer beads as she waited at a hospital mortuary to retrieve the battered body of her brother-in-law.

A resident of a gritty New Delhi neighborhood where working class Hindus and Muslims have lived side by side for years, Mehtab, a 22-year-old construction worker, had gone out on Tuesday evening to buy milk but never returned. Hauled away by stick-wielding rioters, he was found dead hours later, his body bruised and burnt.

That night, Yasmin and her husband cowered at home as marauders threatened to incinerate their neighborhood’s Muslim-owned shops and residences.

“People were chanting slogans of Jai Shri Ram [‘Hail Lord Ram’] and saying ‘leave this house — we will set it on fire’,” Yasmin said, her voice shaking with emotion. “This is the first time I am seeing such conflict. We have always considered Hindus our brothers. [Mehtab] was murdered because he was Muslim. We were attacked because we are Muslim.”

The young laborer was one of at least 35 people killed, with 200 others seriously injured, in New Delhi this week. It was the worst outbreak of sectarian violence in a big Indian city since 2002 when more than 1,000 people, mainly Muslims, were killed in riots in Gujarat.

The carnage in the Indian capital — which left swaths of the city looking like a war zone, with burnt-out mosques, shops and other buildings, shattered glass and charred vehicles — follows a steady stoking of animosity between India's Hindu majority and its Muslim minority by Narendra Modi's ruling Bharatiya Janata Party, analysts said.

Sectarian tensions have surged since December when Modi’s government amended the country’s citizenship laws, incorporating religious criteria for the first time and giving Hindus and followers of other south Asian faiths priority over Muslims.

This week's bloodletting coincided with a visit by Donald Trump to India, overshadowing the US president's effusive praise for Modi. Analysts warned that the riots threatened to distract the government from the urgent task of reviving the faltering economy and realizing its ambition to become a global power.

“They've unleashed forces that cannot be fully controlled,” said Ashutosh Varshney, a political-science professor at Brown University. “Whether Modi and [home minister Amit] Shah can check these forces remains to be seen. Their foot soldiers on the ground are filled with the ideological fervor that has been drilled into them — the tropes of Hindu nationalism that see Muslims as enemies of India.”

Trouble in the affected area flared on Sunday after Kapil Mishra, a hardline local BJP leader, threatened Muslims who were blocking a road in an otherwise peaceful protest against the citizenship law. Addressing a crowd of rightwing Hindus right next to the sit-in, he warned that if the protesters were not gone by the time Trump's visit was over, they would take matters into their own hands.

Shortly afterwards, witnesses said, groups of Hindus and Muslims began pelting each other with stones. By Monday, large areas were in the grip of a full-scale riot, with mobs of Hindu men, carrying firearms, petrol bombs and iron rods, marauding through the area's congested streets, attacking passers-by and setting fire to property they suspected of being Muslim-owned.

“They were asking for identity cards to see if they are Hindu or Muslim and if they saw Muslim people they beat them,” said Abul Kalam, a 60-year-old salesman who was riding his motorbike with a Hindu colleague when they stumbled on the rioters.

In a grim echo of the violent 1947 partition of India — in which up to 2m people are thought to have died — rioters questioned people over their religion, demanding they recite prayers, show religious symbols or even pull down their trousers… said one social activist.

Witnesses said police appeared to do little to stop the rioters.

Mazid, a 32-year-old shop owner, said he and his neighbors on a mixed Hindu-Muslim street were standing together trying to protect their homes on Tuesday evening when they saw a crowd, accompanied by police officers, coming towards them.

“Police were with them and we thought maybe they will stop the violence, but then [someone] fired the shots,” said Mazid. His brother was killed and two neighbors were injured in the gunfire.

On Wednesday morning, Modi’s government, which has control over policing and is responsible for security in the capital, deployed thousands of additional paramilitary police to the riot-stricken areas to try to restore order. That afternoon, Modi took to Twitter to appeal for peace — his first public acknowledgment of the violence.

But even amid the strong police presence, tensions remained high, with many families fleeing to seek refuge with relatives elsewhere.

“People are afraid — they are leaving their homes,” said Shankar Thakur, a 28-year-old teacher. “The mobs who are coming, the police have no power to defeat them.”

Many are also questioning why it took the government so long to clamp down. “Historically, communal violence in India is never the result of weak state capacity,” said Gilles Verniers, a political-science professor at Ashoka University, near Delhi. “The state tends to prevent violence from erupting when it has the intention to do so.”

Analysts said the rioting may not be as severe as other urban violence that has rocked India. But the government's apparent tolerance of two days of unchecked bloodshed had sent a powerful signal to a Muslim community that already felt under siege, they said.

“The violence has already served its purpose,” said Verniers. “It has asserted Hindu dominance and claimed ownership of the public sphere.”