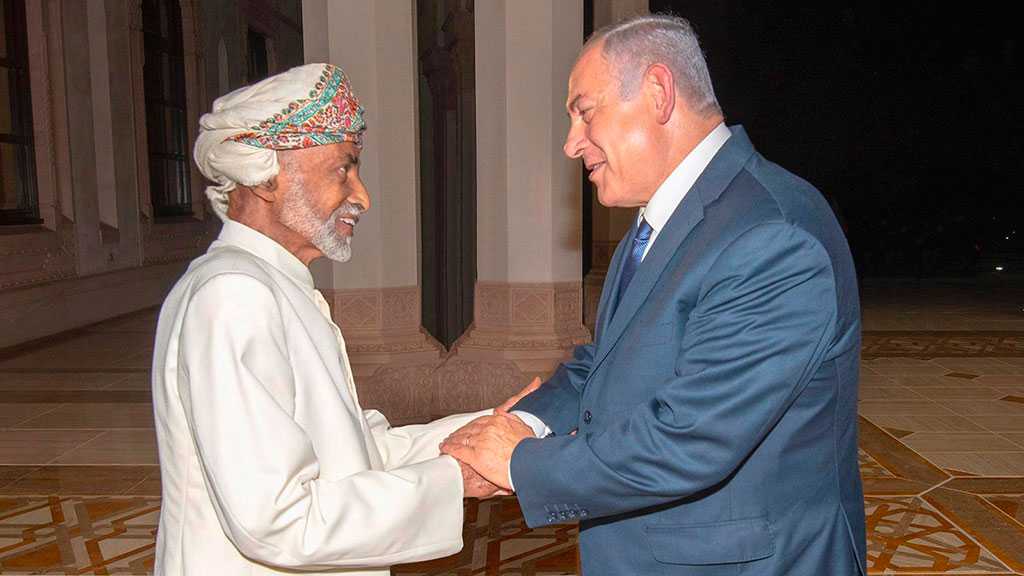 Business ties and warming diplomatic relations between the “Israeli” entity and its neighbors in the Gulf have been an open secret for years.

Those ties will be unveiled with fanfare next October when “Israel” opens its pavilion at the World Expo in Dubai, the United Arab Emirates’ largest city. Participating is like setting up an embassy that will last only six months: Close coordination between the entity and its host will be required on myriad and mundane tasks, including hiring builders and planning ancillary events. It may seem like a substance-free event, but the “Israeli” entity’s presence among the more than 190 other countries is a clear sign of the Middle East’s changing geopolitical picture.

Normalizing relations with Arab countries has been a priority for the “Israeli” entity. In October 2018, the entity’s so-called Prime Minister Benjamin Netanyahu made international headlines with his visit to Oman. Participating in the fair “reflects ‘Israel’s’ growing position not only in the world but also in the region,” said the entity’s Foreign Minister Israel Katz in a statement.

The “Israeli’ entity’s participation in the expo has been made possible in part by shifting regional priorities, namely the emphasis on confronting Iran for countries such as the UAE and Saudi Arabia. Those states also want the enhanced international standing that hosting global events brings, as well as access to "Israeli" technology. Meanwhile, the “Israeli”-Palestinian conflict, long one of the region’s most pressing issues, has fallen from the top of leaders’ agendas. The promised release of the White House’s “Deal of the Century” peace plan could crystallize the changing dynamics.

That said, the “Israeli” entity remains a sensitive issue across the Arab world. While the international body that coordinates the World Expo said it’s up to host nations to invite other countries, the UAE Ministry of Foreign Affairs and International Cooperation referred questions about "Israel’s" participation to event organizers. Expo 2020 Dubai spokesman David Bishop says it’s an “apolitical event” and “the real significance is not about the participation of any single country, it’s about the UAE living up to its obligations when hosting global mega-events.”

The Palestinians will also have a pavilion at the expo; for them, the “Israeli” entity’s participation is a similarly thorny issue. They’re vigilant for any sign of distance between them and their Arab allies, but also haven’t vocally criticized the entity’s participation, dependent as they are on aid and goodwill from the Gulf states.

The “Israeli” apartheid regime expects millions of visitors to stop by its “Towards Tomorrow”-themed exhibition, which will tout the country’s advances in everything from medical technology to water management. The pavilion itself – 1,500 square meters [16,146 square feet] nestled between India’s and Italy’s – is inspired by sand dunes, says pavilion architect David Knafo. Along with promoting technological advances, there will be original music, and a popular Arabic-speaking television presenter will preside. The “Israeli” regime expects to spend more than the $15.5 million it laid out for the 2015 expo in Milan, even as “Israeli” media reports funding shortfalls that are restricting diplomats’ spending.

Katz and other officials have visited the UAE before, and “Israel” opened an office in Abu Dhabi to represent it at the International Renewable Energy Agency. Much remains to be done before the opening of the expo, however. Contractors and consultants to handle electricity, architecture, and safety must be hired; the organizers still need to approve the technical plans for the pavilion; and the program must be fleshed out. Elazar Cohen, the entity’s so-called foreign ministry’s point person on the project, has been flying back and forth to Dubai and working for about a year on the arrangements. He hasn’t encountered any major difficulties with the organizers so far – indeed, just the opposite. “You feel the interest from their side,” says Cohen. “They are trying to give us the feeling that everything is normal, we are as any other country.”

The smooth process also bodes well for furthering commerce between the “Israeli” entity and the Arab Gulf states. Fields such as cybersecurity and agritech are areas where they can work together, enhancing ties that begin at the political level. “Besides just the leaders talking,” says Erel Margalit, founder of Jerusalem Venture Partners, “entrepreneurs are connecting, and maybe that’s an element of real change.”