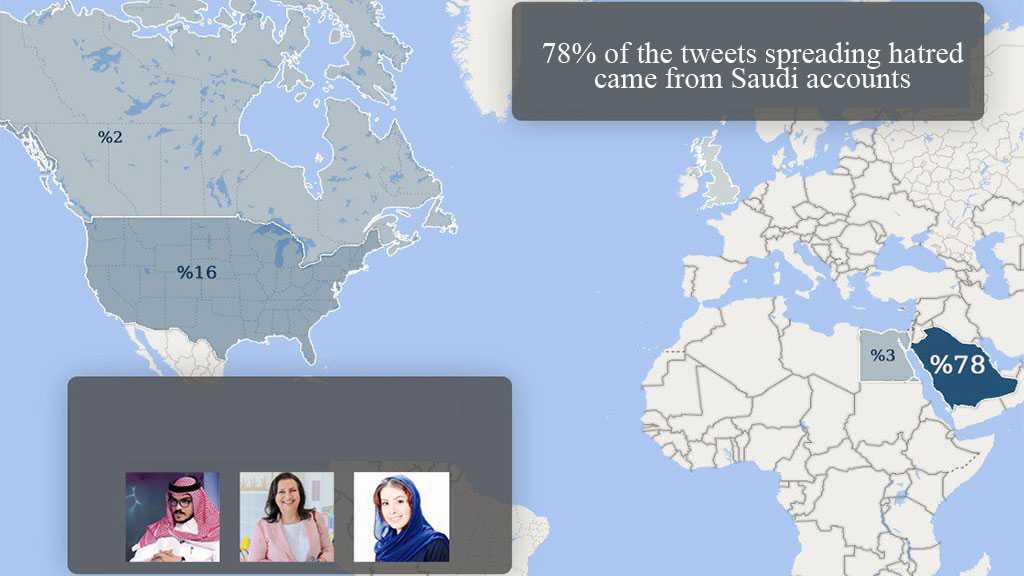 Less than a month after exposing the involvement of Saudi Arabian social media bots in the protests that engulfed Iraq, today’s analyses revealed the same electronic hands behind provoking hatred during Lebanon protests.

A study published by Tansikeyah News on Tuesday revealed that 78% of the accounts using hashtags to incite hatred in the Lebanese society were Saudi.

In a thread of tweets he published on his Twitter account, Owen said I looked at suspected influence campaigns criticizing Hezbollah Secretary General Sayyed Hassan Nasrallah.

“I analyzed around 6,500 tweets from around 4,494 unique accounts. There were a few things I found quite striking. Firstly, the spike in accounts created in September 2019, which was obviously before the escalation of protests in Lebanon. Again this might not be unusual for suspicious accounts, which will become active when required and high suspension rates means usually they are 'newer',” Owen noted.

“The 180 accounts created in September 2019 compares to around the 31 per month average - a large difference. Although I assume it goes without saying (perhaps I shouldn't) it is also common for dramatic events to drive people to creating Twitter events. Although I am not sure why September 2019 outstrips October 2019,” he added.

He went on to explain that “many of the new accounts have tell-tale signs of spam accounts - such as usernames that look like random strings. Much of the content on the hashtags are the type of crude cartoons you'd expect on influence campaigns.”

A brief locational analysis of the tweets also suggested that most of the accounts are based in Saudi Arabia, Owen stated.

While Saudi has the highest Twitter population in the world, Owen said he usually sees this kind of turnout on hashtags criticizing Iran and Hezbollah. Some of the almost brand-new accounts created in Sept/Oct 2019 are ‘very spammy.’

A couple of them, which RT a lot of Saudi loyalist accounts have as many as 10,000 + tweets, despite only being a month and a half old.

Owen concluded that there is certainly some sort of Twitter campaign afoot to demonize Nasrallah.

"So yes, as has become the custom on Twitter, different forces are trying to inflame tensions in other countries, polluting organic discussions with inorganic content."

Earlier in the month, analytics revealed that the trending hashtag that was most used regarding rallies in Iraq was used by only 6% users in the country, while 79% were from Saudi Arabia.

The hashtag was precisely used by 58000 Twitter users based in Saudi Arabia, who definitely caused more escalation in the already tense situation.

Now the question is which country will be the next target of Saudi Arabia’s continued hatred-spreading propaganda? And the repeated question is why Saudi Arabia is deploying its social bots to do this dirty job?