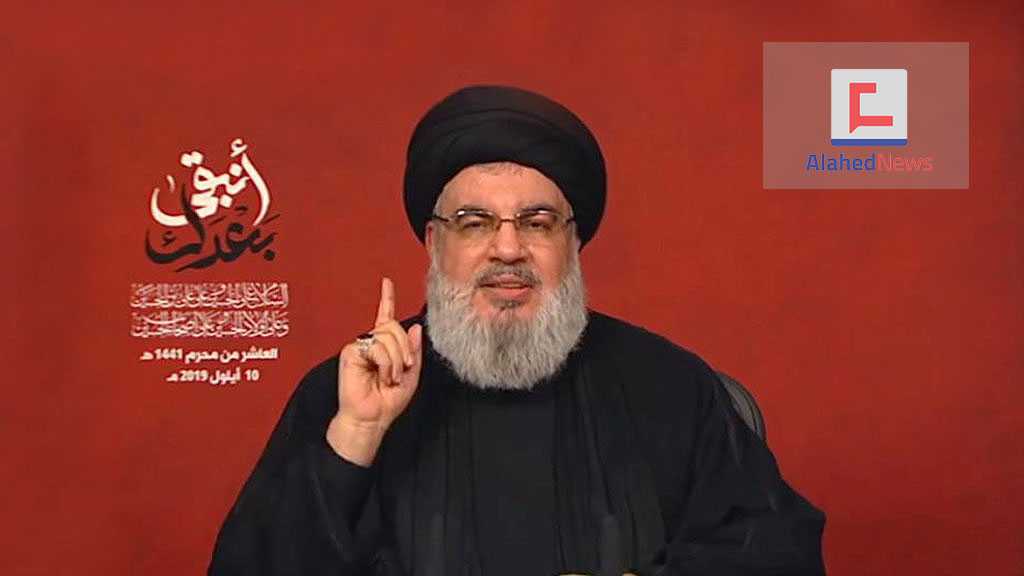 Hezbollah Secretary General His Eminence Sayyed Hassan Nasrallah stressed on Tuesday the axis of Resistance’s support to its leader and its heart, His Eminence Imam Sayyed Ali Khamenei - Leader of Islamic Revolution.

Addressing hundreds of thousands of mourners commemorating Ashura on the 10th of Muharram, Sayyed Nasrallah renewed his party’s eternal pledge to the top cause of our nation, the Palestinian cause.

“We renew with the Palestinian people and Resistance our pledge that there is no choice away from resisting the “Israeli” occupation,” His Eminence said, reaffirming Hezbollah’“ eternal commitment to the Palestinian cause and to confront what is being planned in the ‘deal of the century’ .”

Moreover, he stated that “this stance costs us a lot but it is our commitment.”

He further deplored “Israeli” Prime Minster Benjamin Netanyahu's desecration to the Holy Ibrahimi Mosque. “The Palestinian stance is the main pillar in the confrontation against the US-'Israeli' scheme. These people will protect their cause and holy sites.”

“We - in Hezbollah - reaffirm our commitment to the rights of the Palestinian people in Lebanon as honorable refugees, who must return to their homeland,” The Resistance Leader added.

Moving to the Yemeni arena, Sayyed Nasrallah lamented the fact that “the people of Yemen are the title of oppression and siege as [Imam] Hussein was in Karbala.”

“The war on the Yemeni people has turned into a futile war in light of the international community’s silence and the US-British partnership,” he underscored, pointing out that “the recent developments in southern Yemen form an evidence on the Saudi-Emirati aggression’s false allegations regarding protecting Yemen’s legitimacy.”

His Eminence once again renewed the call to an immediate end to the war on Yemen.

In parallel, Sayyed Nasrallah denounced he Bahraini regime’s actions, describing it a “a traitor that went far in normalizing with the “Israeli” enemy as well as in supporting the “Israeli” aggressions against the people of Palestine, Lebanon, Iraq and Syria.”

Addressing the peaceful Bahraini revolutionary people, His Eminence said: “You, in your peaceful revolution, are waging a jihad for the sake of Allah.”

On another level, he confirmed that “the unjust sanctions on the axis of resistance forms an aggression practiced by the US administration after the failure of the Zionist wars on the resistance.”

“If our people were oppressed by the sanctions, we must act differently and the state must act as well,” Sayyed Nasrallah emphasized, urging the Lebanese sides to open the file of sanctions because it has put the Lebanese economy under attack.”

In this context, he highlighted that “the government must defend the Lebanese and state institutions must not rush to execute the American desires in terms of sanctions.”

“The Lebanese resistance has been on the sanctions lists for years and this is not new. But

when this aggression expands to target others in Lebanon – banks that have nothing to do with Hezbollah – this needs a different approach. We must reevaluate and study our choices well,” His Eminence went on to say.

Regarding the recent “Israeli” attacks on Lebanon, Hezbollah Secretary General viewed that “the recent aggression against Dahyia [the southern suburbs of Beirut] through the bombed drones was a great one.

In addition, Sayyed Nasrallah hailed the united Lebanese official and popular stances in face of the dangerous “Israeli” aggression. “Today we are setting the equations and strengthening the deterrence that protects our country.”

According to His Eminence, “The invincible “Israeli” army turned to act in Hollywood movies. For the first time, the “Israeli” enemy is building a security zone inside occupied Palestine with a depth of 5 km.”

To the apartheid “Israeli” entity, Sayyed Nasrallah sent a sounding message: “If Lebanon is attacked, Hezbollah will respond to the aggression appropriately to defend Lebanon. Lebanon respects 1701 and Hezbollah is part of the government that respects this resolution but if “Israel” attacks, there will be no red lines at all.”

“Lebanon has imposed itself on world powers and everyone contacted it after the latest “Israeli” attack, prior to the resistance’s response and during the Hezbollah response,” Sayyed Nasrallah added, noting that “Lebanon must know that it is strong through the army-people-resistance equation and all countries in the world contacted our government to thwart us from retaliating to the “Israeli” aggression.”

On the Lebanese economic situation, he assured that “the situation is not hopeless and there is a possibility to address it if there is the necessary seriousness. The same as we discussed the previous state budget we will discuss the 2020 budget.”

“The principles that govern our stance will be the same. We refuse any new taxes on low-income citizens in any economic solutions in Lebanon. Instead of going to the pockets of the poor, let us search for the looted funds, and this should be the leading choice to address the economic situation,” His Eminence said.

On the regional scene, Sayyed Nasrallah rejected any war scheme against the Islamic Republic of Iran because it will ignite the region.

“We will not be neutral in the battle between the truth and falsehood and who thinks that the supposed war will be the end of the axis of resistance I tell them that it will result in the end of both "Israel" and the US domination in our region,” he clarified.

According to His Eminence, “Today, our Hussein is Imam Sayyed Ali Khamenei and the Islamic Republic of Iran is the heart of the resistance’s axis.”

To Imam Khamenei, Sayyed Nasrallah said: “ We tell you as the companions of Imam Hussein said on the 10th night of Muharram, ‘We won’t leave you, O son of Hussein’.”