Following years of war on Syria, and the successive victories of the Syrian Army against the equations of the West and some Arab countries, it seems that some of those countries, including Saudi Arabia, started reviewing their calculations regarding the stance from Syria.

In this respect, famous Saudi Twitter account named “@mujtahidd” tweeted that Saudi Crown Prince Mohammad Bin Salman ordered the foreign ministry to prepare for the return of the Saudi ambassador to Damascus in the coming weeks.

According to Mujtahidd, Bin Salman ordered other concerned ministries to set a plan for restoring trade and economic ties: “Unlike what others believe, there is no dispute between Saudi Arabia and the United Arab Emirates towards Syria.” 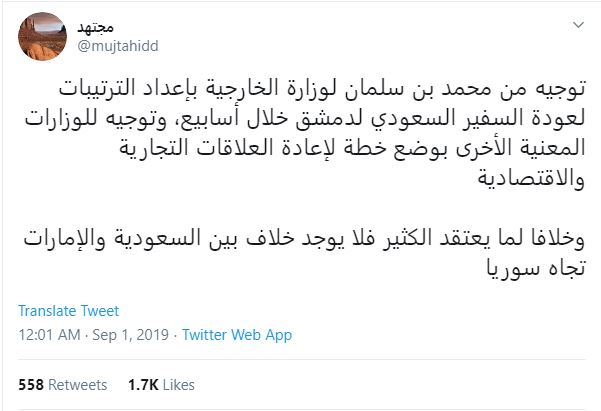 The Saudi and Emirati retreat of the stance towards Syria started to appear during the Arab Parliament summit in Oman, in which they both welcomed continuing the support of constructing the Arab Parliament Union’s HQ in Damascus, which has been on hold since years, to be replaced with a temporary headquarters in Beirut, Lebanon.

Also during the meeting, Saudi Arabia supported the Syrian government representative as some members asked Damascus to pay financial fees to the Parliament, which represent Syria’s share of the collective financing of the Arab Parliament project, in which Damascus refused to pay fees of the previous years because it didn’t choose freezing its membership.

Relatively, the UAE inaugurated its embassy in Damascus on December 27 after five years of withdrawing the ambassador.