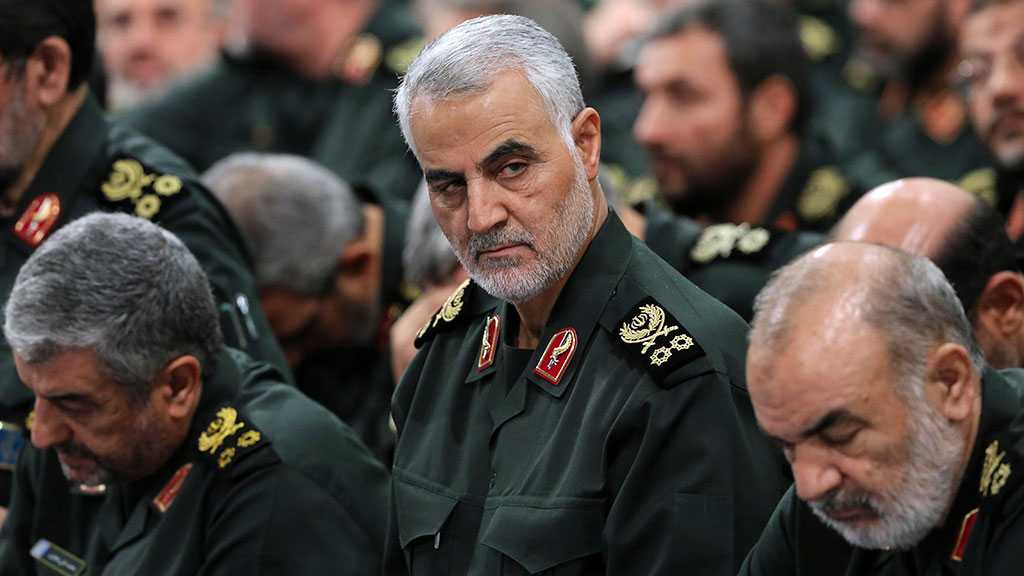 "There is no doubt that these insane operations will be the last struggles of the Zionist regime," Major General Qassem Soleimani said, according to a Twitter account attributed to him.

On Saturday night, the “Israeli” entity launched air raids against targets near the Syrian capital city of Damascus. The “Israeli” military claimed its strikes had prevented an attack on the “Israeli”-occupied territories “using killer drones.”

Iran, however, dismissed as mere “lies” the claim that "Iranian" targets have been hit by the “Israeli” attacks.

Hezbollah Secretary General His Eminence Sayyed Hassan Nasrallah also said Sunday that “Israeli” missiles targeted one of Hezbollah’s civilian structures in the Damascus outskirts in Syria, dismissing “Israeli” officials’ allegations that the projectiles had hit an Iranian site there.

Sayyed Nasrallah noted that two Lebanese Resistance fighters were martyred in the missile strike, stressing that “Hezbollah will respond in kind in case the ‘Israeli’ military continues to target and kill resistance forces.”

The Hezbollah chief also warned the “Israeli” entity against violating the Lebanese airspace, one day after two “Israeli” drones crashed in a southern neighborhood of Beirut.

The “Israeli” entity is also said to be behind a recent wave of air raids on positions of pro-government Iraqi forces.

Iraqi Vice President Nouri al-Maliki recently warned of a “strong response” if it is proven that the “Israeli” regime was behind the airstrikes in the country against the positions of pro-government Popular Mobilization Units [PMU].

Maliki, who is also secretary-general of the Islamic Dawa Party, said on Friday that if the entity continues to target Iraq, the country “will transform into a battle arena that drags in multiple countries, including Iran.”