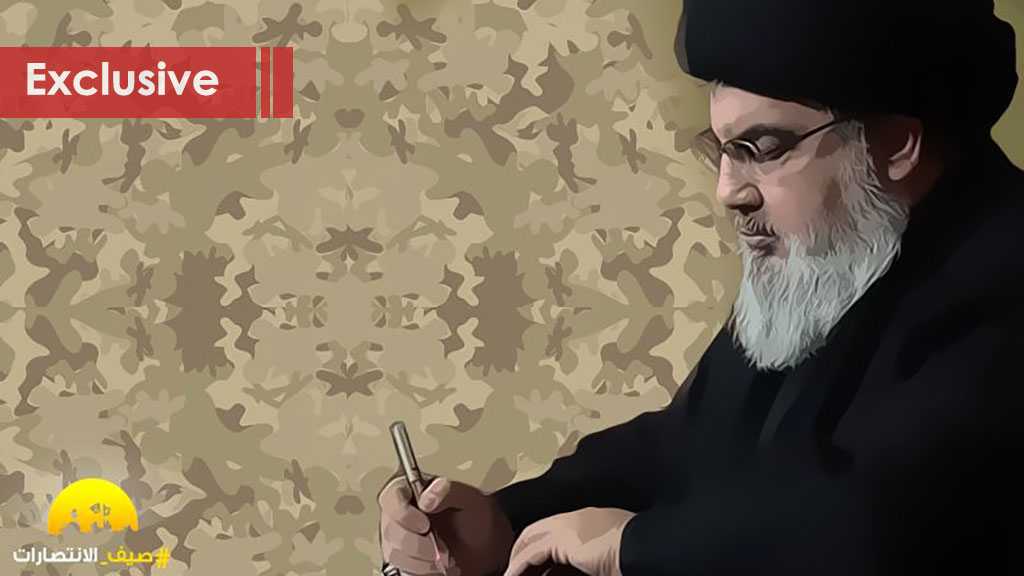 Beirut - Hezbollah's Secretary General, His Eminence Sayyed Hassan Nasrallah, is no stranger to attracting the masses. Both friend and foe are mindful of him.

The masses know him through his speeches while some politicians know him closely through private meetings. What is unknown about the Secretary General is his battlefield personality and the way he deals with the military men during the battles.

He is always present on all battlefields, working both as a mentor and a leader and staying close to every soldier. His voice is always part of the conscience of the Mujahideen in the groves. They derive from him the impulse, spirit and much of the love that the battlefield requires.

A leader in the Islamic Resistance tells Al-Ahed News Website that "in 2013, when the leaders of the Islamic Resistance were planning to liberate Al-Qusayr, the Secretary General's touches were also present. His Eminence determined the course of the attack on Al-Qusayr. After the leadership decided to attack Al-Qusayr, the debate was whether the resistance would attack from the north, i.e. from Tell Mando towards Arjoun and from Arjoun, the Mujahideen would bypass Dabaa Airbase and advance towards Al-Qusayr, or to start the attack from the south, i.e. from the place the resistance fighters reached the contact point with Al-Qusayr and start the offensive from Jisr Al-Mashtal towards Al-Qusayr."

That's where the leadership came in. The Secretary General resolved the decision. Sayyed Hassan Nasrallah gave the order that the attack be from the south and not from the north, from the contact points with al-Qusayr that the Mujahideen reached. That's how it went.

Sayyed, who raises his finger threatening the “Israeli” entity with his military arsenal while the media and study centers analyze his speeches and read between the lines of his words, is a man who is careful with the blood of his sons and brothers (the resistance fighters) on the battlefield. He does not take this blood lightly. The Islamic Resistance leader tells Al-Ahed that most times, a lot of the battles could have been resolved a lot quicker. But Sayyed preferred the battles to take longer periods of time as long as the human losses were reduced and not many fighters were martyred.

Sayyed, who uses the power God gave him for the sake of truth, directs his wrath towards the enemy and his mercy towards the women, children and unarmed civilians. These are the ethics of true Islam, rooted in his heart. During the battles to liberate Lebanon’s Eastern Mountain Range, which ended with the Second Liberation in 2017, His Eminence introduced a series of limitations and restrictions.

The Secretary General intervened in many of the battles’ broader context. In the battles to liberate the Eastern Range, Sayyed intervened tactically, according to a leader in the Islamic Resistance who spoke to Al-Ahed. At the time, Sayyed listened to details from officers in the Islamic Resistance: "How will we maneuver? How will the infantry intervene? How will the bypass take place? The types of maneuvers..."

During a meeting with the officers and leaders of the Islamic Resistance, His Eminence the Secretary General set a number of restrictions, one of which was that civilians should not be attacked "especially when it comes to the [refugee] camps. Even if they fired at us from the camps, we try not to respond." The other restriction, according to one of the leaders of the resistance, was that "if the resistance fighters were forced to respond to the source of the fire from the direction of the civilians, gunfire should only come accurate and focused weapons, so that it precisely responds to the source of the fire without any error. Even this kind of response, needed special permission."

"Sayyed remained with us during all the operations. He was following up on everything with us," the leader of the Islamic Resistance confirms to Al-Ahed. He, then, clarifies that during the meeting with his officers, Sayyed “spoke using military terminology. He behaved as a military commander addressing the scene on the battlefield that was unfolding before him. He set limitations and restrictions and gave his orders to his officers. Back then, Sayyed gave us the time we needed and more.

“You are not pressed for time or on a deadline,” he told us.