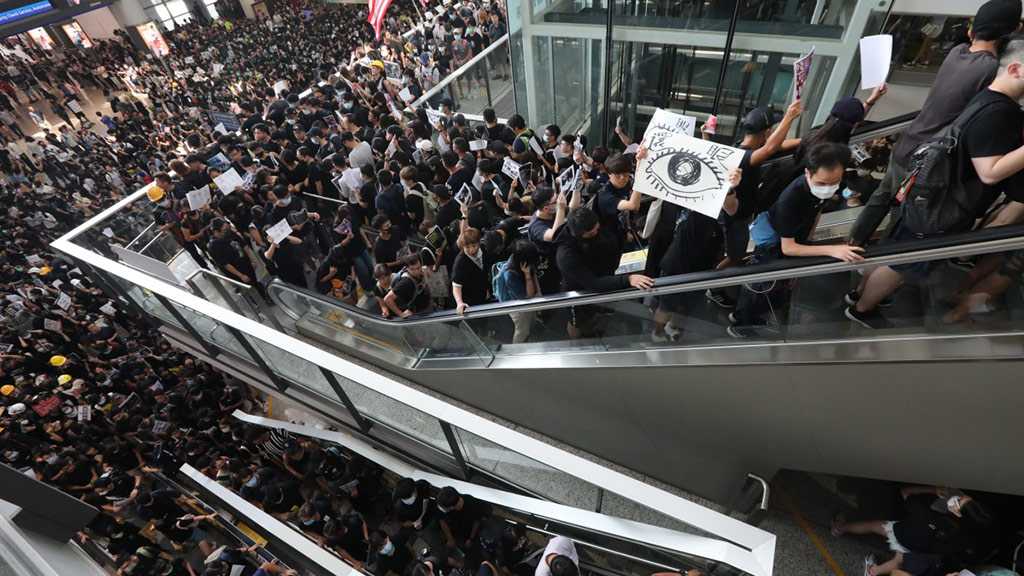 The protests ended early Wednesday morning following a series of clashes in which a policeman drew his gun after being beaten by demonstrators and other officers fired pepper spray.

The rallies paralyzed one of the world's busiest travel hubs, deepening a 10-week crisis that is the biggest challenge to Chinese rule of Hong Kong since its 1997 British handover.

US President Donald Trump added to fears Beijing may be prepared to stage a military intervention to end the unrest, saying on Tuesday his intelligence had confirmed Chinese troop movements toward the Hong Kong border.

The people power movement, which has seen millions take to Hong Kong's streets, was sparked by opposition to a planned law that would have allowed extraditions to mainland China.

It quickly evolved into a much broader campaign for democratic freedoms, and to stop the growing influence of China's authoritarian rulers in the semi-autonomous city.

On Monday and Tuesday, thousands of protesters wearing their signature black T-shirts gathered at Hong Kong's airport, forcing hundreds of flights to be cancelled.

After initially just voicing their demands with peaceful demonstrations, the protesters adopted more aggressive tactics on Tuesday and created barricades with luggage trolleys to block passengers at the departure halls.

Late on Tuesday night, the protests descended into a series of violent confrontations with police, and demonstrators scuffling with passengers desperate to get on flights.

In one particularly ugly scene, a group of protesters ganged up on a policeman and beat him. They stopped their attack when the policeman pulled his gun and pointed it at them, but did not fire.

Demonstrators also turned on two men, fueled by suspicions within their ranks about undercover police or spies.

The first man was held for about two hours and assaulted before eventually being led away in an ambulance. Riot police briefly deployed pepper spray and batons to beat back protesters while they escorted the vehicle away from the departures hall.

Another man, wearing a yellow journalist vest, was surrounded, zip-tied and then beaten by a small group who accused him of being a spy.

In a tweet, Hu Xijun, the editor of China's state-controlled Global Times tabloid – which has vociferously condemned the protests – said the man was working for the paper.

By early Wednesday, most protesters had left and many flights were operating as scheduled in the morning.

However, it was unclear if the protesters, who have no public leaders and organise via social media, would return to the airport.

"The airport is our last bargaining chip," one of a handful of protesters who remained at the airport on Wednesday morning told AFP.

Michael, a 25-year-old tourist from Dubai, got to the airport on Wednesday more than 12 hours ahead of his flight home in a bid to avoid potential protests later in the day.

"I can feel like they are really fighting for my freedom, so my heart goes to them in a way," he said of the protesters.

But he said they were now targeting the wrong people.

"The passengers have nothing to do with what's happening, they mostly are tourists," he told AFP.

On Tuesday morning, the city's leader, Carrie Lam, gave an at-times emotional press conference in which she warned of dangerous consequences if escalating violence was not curbed and said the hub was being "pushed into an abyss."

But she once again refused to make any concessions to the protesters.

The Chinese government has repeatedly signaled the protesters are reaching the limits of the "one country, two systems" legal framework that gives Hong Kong its autonomy.

Authorities in Beijing on Monday described some of the violence as "terrorism", and state-run media this week began promoting videos showing security forces gathering in Shenzhen just across the border from Hong Kong.

Trump on Tuesday said his intelligence had confirmed Chinese troops were gathering across the border.

The United Nations' human rights chief on Tuesday voiced concern over force used against protesters and called for an impartial probe.

However, Trump has said little to support Hong Kong's pro-democracy movement, drawing criticism from both sides of the American political spectrum.