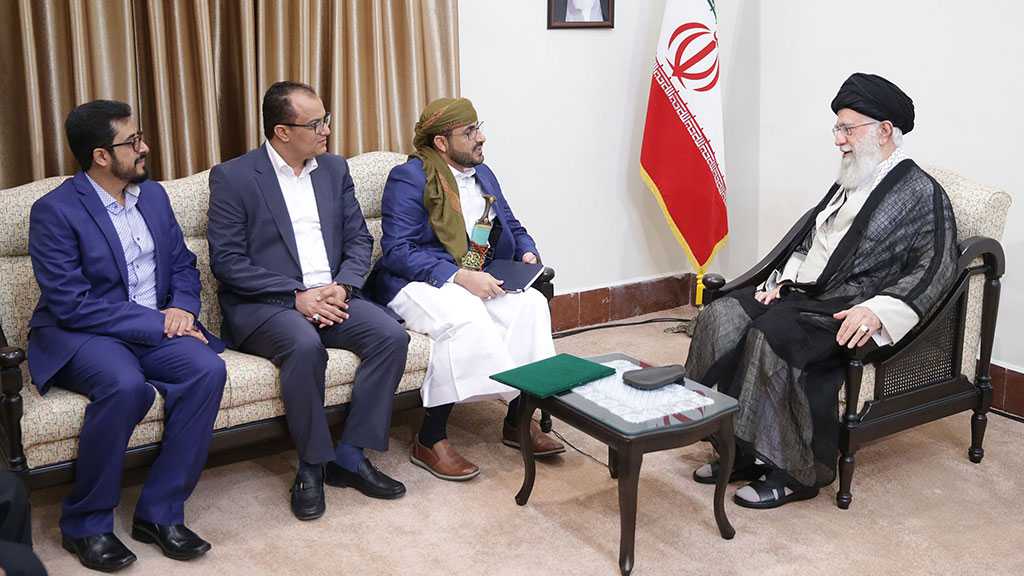 The Leader of the Islamic Revolution His Eminence Imam Sayyed Ali Khamenei warned that the Saudi regime and the United Arab Emirates [UAE] — which have been leading a military aggression against Yemen — are after partitioning the fellow Arab country.

He further called for strong resistance in the face of the scheme.

Imam Khamenei made the comments in a meeting in Tehran on Tuesday with a visiting delegation from Yemen’s Ansarullah movement, led by its spokesman Mohammed Abdul-Salam.

The Leader said the Saudis, the Emiratis and their supporters, who have perpetrated great crimes in Yemen, are after “disintegrating Yemen, a plot that should be confronted decisively,” adding, however, that the scheme is doomed to failure.

Elsewhere, His Eminence congratulated the Yemeni people on their successful resistance in the face of the military aggression, asserting that the oppressed nation will undoubtedly emerge victorious.

“A good future” is awaiting the Yemeni people, the Leader noted. “With divine grace, they will form a strong government and achieve progress within the framework of that government.”

Moreover, Imam Khamenei  criticized the West’s indifference towards the crimes being committed in Yemen, saying the developments unfolding in the Arab country have exposed the true nature of those who claim to be advocates of human rights in the US and the West.

“American and Western statesmen perpetrate the worst excesses under a humanitarian, civic, and moral guise, and interminably claiming regard for human rights,” he said.

“These criminal powers should be confronted with the power of devotion, resistance, and by reliance on [faith in] divine victory. This is the only way [to confront them],” the Leader added.

Imam Khamenei cited the instance of the Islamic Republic’s resistance against foreign pressure since the 1979 Islamic Revolution, especially during the ex-Iraqi regime’s Western-backed war on Iran in 1980s.

Despite 40 years of sanctions, the Iranian nation has made important achievements in the area of defense, the Leader said.

Meanwhile, Imam Khamenei further offered condolences over the recent assassination of Ibrahim Badreddin al-Houthi, Ansarullah leader Sayyed Abdul-Malik al-Houthi’s brother, which is said to be linked to the Saudi regime.

For his part, the Ansarullah spokesman praised Imam Khamenei’s support for the Yemeni nation as “a blessing” and “highly encouraging.”

He equated Iran’s backing for the world’s oppressed people, especially Yemenis, with “a religious and ideological position.”

The Yemenis are confronting a war being waged by as many as 17 nations, Abdul-Salam said, pledging that the nation’s resistance and steadfastness in the face of the oppressors will last until “complete victory.”