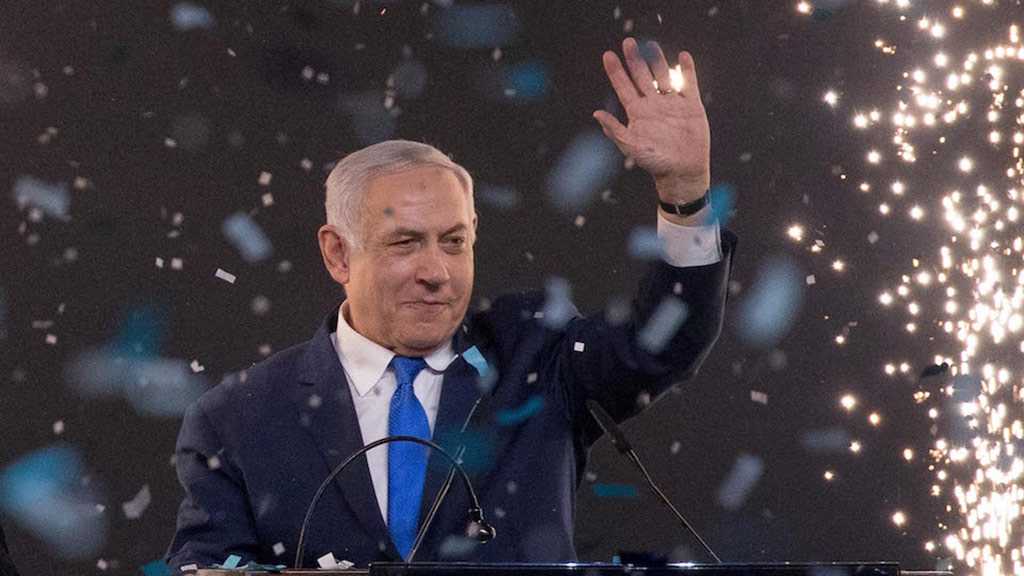 A majority of the “Israeli” public opposes a unity government led by “Israeli” Prime Minister Benjamin Netanyahu that brings together the ruling Likud party and its centrist competitor Blue and White, a poll has found.

The opposition spans the political spectrum. Overall, 34 percent of “Israeli” prospective voters say they support the idea, while 52% oppose it, and 14% don’t know their preference. Support rises slightly among self-described right-wingers – possibly because Netanyahu would lead the government in this scenario – to 37% support and 48% opposition, while 15% don’t know.

Among center-left voters, who are Blue and White’s base, support and opposition to the idea both increase – 38% support, 55% oppose and just 7% don’t know.

A month and a half before the September 17 election, speculation is rife that a unity government could be the only viable result of the race. In most major polls, Likud does not appear to have a Knesset majority with just right-wing and Haredi parties after the dramatic falling out in May between Likud and Avigdor Lieberman’s Russian-speaking Yisrael Beytenu party.

Similarly, Blue and White looks to be unable to cobble together a coalition with parties to its left, and, without Likud, would need to build a government leaning on mutually antagonistic secularists and Haredi factions – a similarly unlikely prospect.

The poll by the Walla news site only asked about a possible Netanyahu-led unity government. Blue and White’s Benny Gantz has vowed not to sit in a government led by Netanyahu, while Liberman has called for Netanyahu to be replaced as Likud chairman by another figure in the ruling party so as to enable a national unity coalition.

The latest poll, conducted by the Midgam firm, suggests that a Netanyahu-led unity government would fail to satisfy elements on either side of the aisle, with the center-left likely unhappy that Netanyahu remains premier and significant parts of the right possibly unhappy that Blue and White gets a seat at the decision-making table.

The poll asked respondents whom they plan to vote for, and delivered figures that, as with other recent polls, suggest the only way forward will be a unity coalition: Likud at 31 Knesset seats, Blue and White 29, the Arab Joint List 11, the United Right 11, Yisrael Beytenu 10, United Torah Judaism eight, Shas seven, the Democratic Camp seven, and Labor-Gesher six.

Far-right factions Otzma Yehudit and Zehut failed to pass the 3.25% threshold of votes to enter the Knesset.

If those are the figures delivered by voters on Election Day, the Likud-led right [Likud, United Right, UTJ and Shas] will come to just 57 seats, four short of a majority in the 120-seat Knesset without Lieberman, who has vowed to force a unity government on a frustrated Netanyahu.

Blue and White fares worse, with a left-leaning coalition alone [Blue and White, Democratic Camp and Labor-Gesher] amounting to just 42 seats. Even with Yisrael Beytenu, a purely center-left coalition can’t cobble together a majority.

The poll also asked Israelis who they believe is a more “fitting” candidate for prime minister, Likud’s Netanyahu or Blue and White’s Benny Gantz.

Netanyahu, as always, is in the lead with 43%; Gantz wins 30%. Not surprisingly, among right-wing voters Netanyahu beats Gantz 65%-14%, and among center-left voters Gantz beats Netanyahu 59%-9%.

The poll was conducted online among a representative cross-section of the Jewish and Arab population, with 503 respondents and a 4.4-point margin of error.