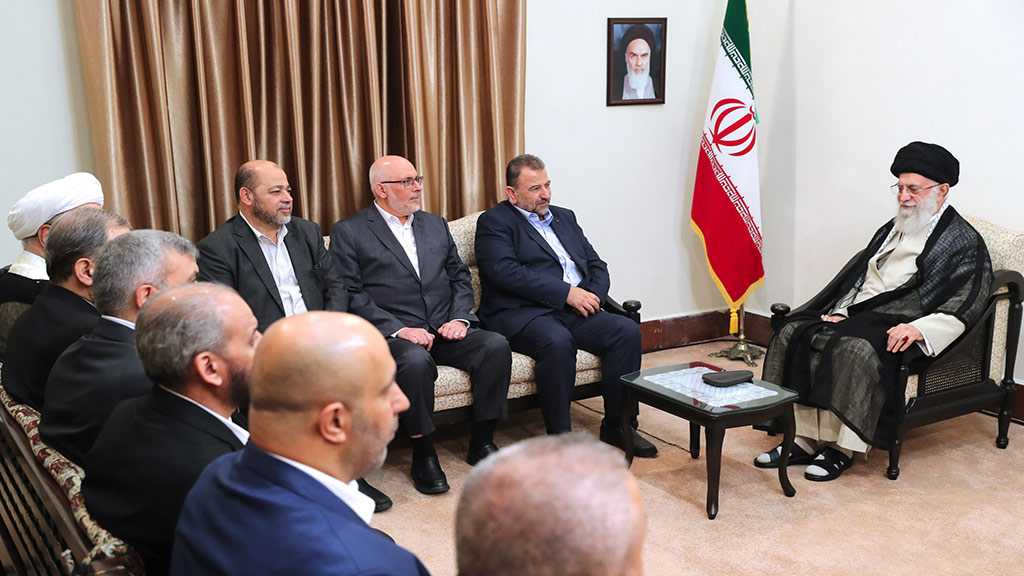 Heading a high-ranking delegation from the Palestinian resistance group Hamas, al-Arouri arrived in Tehran on Sunday to hold talks with senior Iranian figures in line with the efforts to boost its capabilities to continue the resistance against the occupiers.

During the meeting with the delegation, Imam Khamenei said, “Hamas is in the heart of Palestine and Palestine lies at the heart of the Islamic world.”

Elsewhere in his comments, His Eminence said, “[Hezbollah Secretary General His Eminence] Sayyed [Hassan] Nasrallah says: ‘I will pray at Masjid al-Aqsa, God willing,’ is an absolutely practical and achievable aspiration for us”, adding that “If we all act upon our duties, the divine promise will definitely come true.”

During the meeting, the two sides discussed issues related to Holy Quds, Gaza and the resistance of the Gazans and conveying the Palestinian cause to next generations.

Imam Khamenei said the resistance of the Palestinian people in the besieged Gaza Strip and the occupied West Bank promises "victory and conquest".

"God has promised assistance and victory to those who are steadfast in His path. However, the fulfillment of this promise has requirements, the most important of which is Jihad, struggle and tireless effort in various political, cultural, intellectual, economic and military dimensions,” the Leader said.

His Eminence touched on the "treacherous" initiative proposed by US President Donald Trump, dubbed as the "Deal of the Century", saying there is need for promotional, cultural and intellectual work to confront it.

The Leader was apparently referring to a two-day conference held in Bahrain last month, aimed at rallying support for an "investment" plan in the Palestinian Territories as the first part of the "Deal of the Century".

“Confronting the Deal of the Century requires promotional, cultural, and intellectual efforts and the other method is to make the Palestinians feel advancement. Today Palestinians are equipped with precise missiles rather than stones and this means the feeling of advancement,” His Eminence explained.

The plan has met broad disdain from Palestinians and others in the Arab world although regional US allies such as Saudi Arabia discreetly support it.