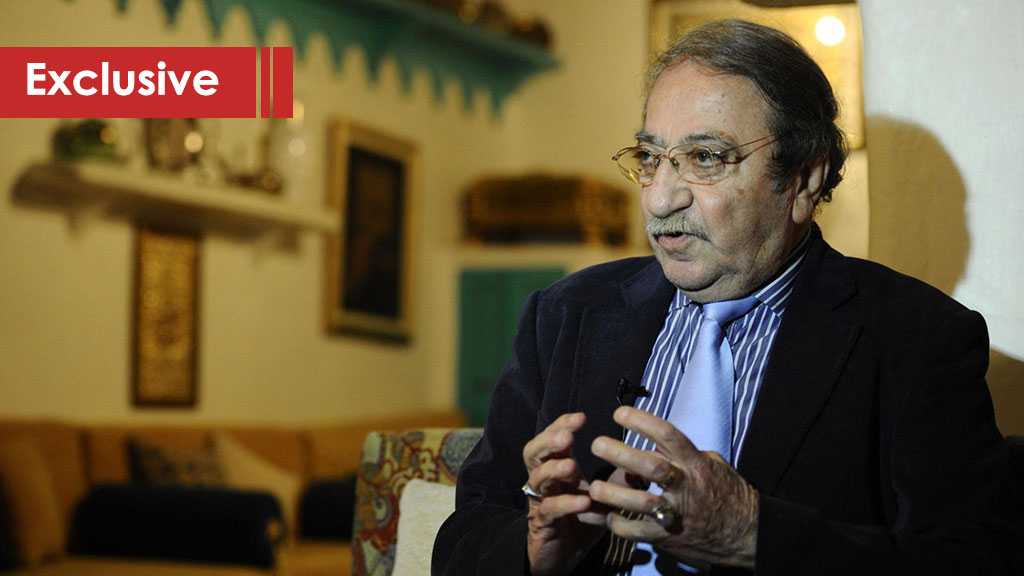 Damascus - The great artist Duraid Lahham never moved away from the resistance. He depicts its moral and creative aspects in many of his works.

But Lahham insists that there is no comparison between his important work and the performance of the men of God on the battlefield. When we visited him in his office in Damascus, he told us about Hezbollah and Sayyed Hassan Nasrallah whom he met following the July war. The eighty-year-old artist is proud of the resistance’s achievements in May 2000 and July 2006. His pride transformed him into "a young man who feels that life has another taste which is that of victory," he tells Al-Ahed News.

The resistance is up to the task

Every detail in the office of the great Duraid Lahham suggests his organic link to the resistance. Pictures of Hezbollah Secretary General Sayyed Hassan Nasrallah as well as pictures of resistance figures belonging to different ideological schools adorn the walls.

"When the courageous Lebanese resistance fighters captured the “Israeli” soldiers in July 2006, I certainly rejoiced because I had confidence that the resistance was up to the task. I was saddened by the position of some Arab officials who sided with “Israel” that day when they said that what happened was an adventure with uncalculated consequences," said Lahham.

Damascus is the site of his resistance work. He welcomed the displaced people who were forced to leave due to the brutality of the Zionist enemy. He told us about "the days when we occupied our time by taking care of our dear Lebanese brothers who were forced by the circumstances of war to leave their country. This, by the way, facilitated the movement of the resistance.”

"We did not get a chance to miss them,” he said in his casual Syrian accent. “They left and headed back. As soon as the war ended after thirty-three days, the people of the South astonished the world. On the thirty-fourth day, they returned. They did not wait a week or two, a month or a year. No. This is how much they believed that the resistance will be their protector in the South and elsewhere.”

The meeting of a lifetime

After the July war, Duraid Lahham had a "very warm" meeting with Sayyed Hassan Nasrallah.

"We spoke about culture, art, and literature more than we did about the issue of war and the resistance," said Lahham. "Sayyed is a spring [of knowledge]. It is true he wears a turban. But he is also a patriotic military leader, a politician and an educator. This hero possesses all sorts of leadership qualities."

"The most beautiful thing about him is his respect for others, for everyone. He respects all people and deals with them with a lot of humility and a lot of kindness. Thus, when you meet a person like His Eminence, you are both terrified and anxious at the same time. But his smile directly breaks the barrier of fear and anxiety. And you become like a brother to this great figure," Lahham said describing the impression this meeting left in his heart.

Lahham watched the latest interview with the secretary general. He heard Sayyed’s remark about performing prayers in al-Quds. "I believe everything Sayyed says. He promised us victory and he delivered. Great Arab armies could not withstand for seven days. Only a handful of young resistance fighters fought "Israel" for 33 days. "Israel" is the one who asked to stop the war and not the resistance and Lebanon. It is the one who asked and begged. I never forget the day Sayyed said look at the sea and you will find Sa’ar burning. This was achieved. Hence, he is honest. That is why they call it the honest promise,” Lahham told al-Ahed.

Duraid Lahham described some Arab rulers that "give money to the Americans who continue to humiliate them and occupy their people" as having “no dignity and fear being free.”

“The Americans are milking all their wealth. A Dutch cow does not produce this much milk. They take pleasure in insulting them."