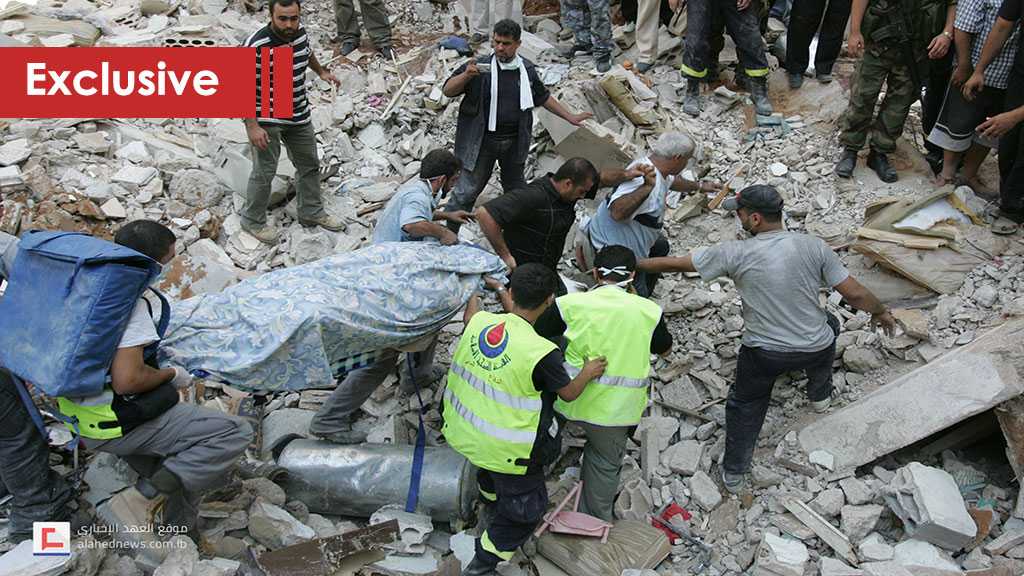 Beirut - Amid the ashes of aggression and the smell of death, there must be a touch of hope that a paramedic plants in the heart of an injured person. This wounded person waits for a long time under the rubble for a man in his gray uniform to extend the hand of salvation. These are the young men of [Hezbollah’s] Islamic Health Society - the Civil Defense, who help and support their community at every dangerous juncture.

Talking about the July 2006 war is not complete without remembering those who were soldiers of humanity – the paramedics and the saviors after every attack and massacre. Among them are those who sacrificed their lives for the cries of the babies and the wounded.

Kamal Zuhour, director of operations at the Civil Defense of the Islamic Health Society during the July war, remembers six medics.

"They sacrificed their lives by carrying out rescue operations and providing medical assistance to ensure that people survived," said Zuhour tells Al-Ahed News. "They are the martyrs of humanity. They watered the earth with their pure blood for people to enjoy dignity and victory."

During the July aggression, the [Islamic] Health Society set up a plan of action. Ambulances and ambulance crews were deployed in most areas across the South, the southern suburbs [of Beirut] and the Bekaa, especially in the villages that were subjected to continuous bombardment. There were 70 ambulances and more than 200 paramedics, who were ready to face the aggression by carrying out rescue operations and providing medical assistance as well as transporting the bodies of the martyrs.

Zuhour told al-Ahed that the directorate provided first aid to hundreds. The transfers of the injured break down as follows:

439 wounded from the villages of Tyre to Jabal Amel Hospital

119 wounded from the southern suburbs [Dahiyeh] to Beirut hospitals

The bodies of hundreds of civilian martyrs were transferred to refrigerators prepared by the Civil Defense in cooperation with hospitals and in preparation for their burial.

The barbaric attacks by the “Israeli” enemy targeted the humanitarian aid crews. The Civil Defense Operations officer at the time said that anything was expected from this barbaric enemy, which did not distinguish between stone and man, children, young men and women. In its eyes everyone was a target that had to be eliminated.

Zuhour asserts that the civil defense suffered its fair share of attacks just like the rest of the people. Three of its ambulances came under attack from the air and were completely destroyed. Despite this blind hatred and barbaric bombardment, Zuhour tells al-Ahed that the paramedics were neither tired nor worried. Instead they were the first to perform their humanitarian duty to rescue and aid the wounded. They had faith in Allah Almighty and believed in martyrdom on his path. They entered villages being bombed by the Zionist enemy and pulled out the wounded and the bodies of the martyrs. They strived to bring in emergency aid and supplies to the villages to strengthen the steadfastness of the people. They also worked to evacuate many families besieged in the villages where confrontations were unfolding and provide assistance for them.

During the war, the Civil Defense coordinated its operations room with those of similar organizations, such as the Lebanese Red Cross, the Risala Scouts and the General Directorate of Civil Defense in order to transport the martyrs and the wounded. The international organizations (the International Red Cross and the United Nations) as well as the High Relief Committee were contacted. Several meeting were held with their representatives in order to provide an international cover for the entry of rescue teams, paramedics and rubble removal vehicles into areas to recover the bodies of martyrs from under the debris.

Zuhour recalls the destruction of a residential complex in the Ruwais area in Beirut’s southern suburbs and the massacre committed there.

“On the eve of the announcement of the cease-fire, the Zionist enemy committed its massacre in the compound of Imam Hassan (PBUH) in the Ruwais area. The complex contained 240 apartments. The enemy’s aircraft bombed the compound with 23 tons of explosives and completely flattened it. The civil defense teams intervened and set up a quick plan to remove the rubble and recover the wounded and martyrs. 43 martyrs were pulled out," Zuhour said.

"The rescue operations and the removal of the debris went on for 24 hours for the next 20 days," he added.

On the morning of the cease-fire, the Civil Defense worked in coordination with similar organizations to remove the martyrs from the rubble. It also worked to identify the martyrs and organize funerals in their villages as well as transport their families to where the burials were taking place.

After the war things weren’t the same. Development, progress and amplified experience are the natural course of any institution or organization seeking to lift society.

Following the war, six centers were opened in the Bekaa, six in Beirut and the north and nine in the South. A center specializing in fire training, rescue operations and providing medical assistance was opened in Rasm El-Hadath in the Bekaa.

Furthermore, Muqaddam points to the opening of a big training center located in the South called the ‘Kafra Training Camp’. The camp includes simulations of earthquakes. It specializes in training for rescue operations and providing medical assistance. It also houses several playgrounds and a world-class swimming pool in addition to rappel towers, an athletics field and a field specialized for motorcycle training.

The development was not limited to centers and equipment. The number of personnel also increased.  According to the Director-General of the Civil Defense, the personnel (both staff and volunteers) have significantly increased. Before the war, the civil defense had 75 employees and 200 volunteers. After the war, the number increased to nearly 3,000 members.

Muqaddam explains that during the July war, the “Israelis” destroyed many of the civil defense centers. This made it impossible to carry out training of its members. There was cooperation with international institutions, including the International Red Cross, the Iranian Red Crescent and some European institutions, to achieve this goal. The staff was trained. Instructors were prepared in all specialties that include rescue and first aid. Training courses were conducted outside Lebanon.