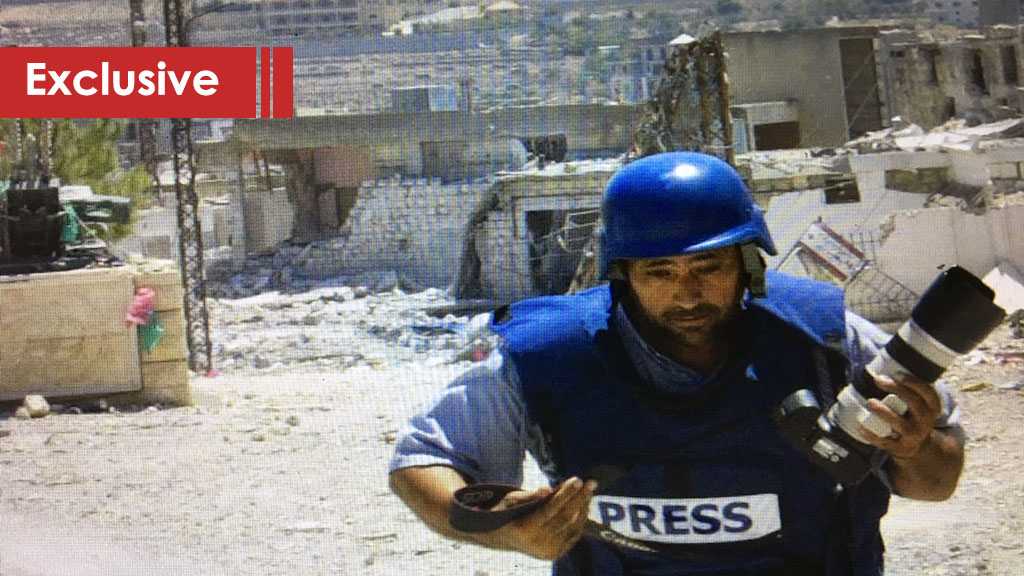 Beirut - In visual marketing, a picture is worth 60,000 words; that’s why a text cannot compete with images, especially in times of war.

Science proved that the human brain is able to process images 60,000 times faster than a text. This makes clear that it takes a picture less time to reach a wider spectrum of audience than a text does.

Mr. Aziz Taher, a professional journalist photographer who heads the Press Photographers Syndicate in Lebanon, covered the brutal ‘Israeli’ war on Lebanon that happened to take place the summer of 2006. The war, that lasted some 33 days, from July 12th until August 14th, was the toughest in the Middle Eastern modern history.

In an exclusive interview with Al-Ahed news website, Mr. Taher introduces the importance of photos by recalling his own experience as a southerner from the Lebanese village of Houla.

“For those who don’t know, in 1948, the ‘Israeli’ enemy committed a horrible criminal massacre in Houla. Because the massacre was not documented with photos, people forgot about it, although it claimed the lives of more than 70 martyrs. The massacre was absented from the society’s public memory. Here lies the importance of the photo.”

As the young villagers started talking about the massacre, people got to learn its story, the man narrates, “but it wasn’t deep-rooted like any other ‘Israeli’ massacre that was photographed such as the Deir Qassem, Sabra and Shatila, al-Mansouri and Qana massacres…”

Hereby, Mr. Taher moves to shed light on the importance of photos during the July 2006 war: “The ‘Israelis’ used to kill us then tell the entire world that they are in danger. Today, however, the equation has changed thanks to the picture.”

Photography as a profession

Mr. Aziz Taher, the professional photographer who works with several international news agencies, including Reuters, spoke on behalf of other Lebanese photojournalists, classifying their affiliations into patriotic and professional.

“Regarding our professional affiliation, we didn’t need anything to add to our photos; the facts on the ground were far worse than intervening in any picture. Massacres committed by the ‘Israeli’ enemy against our people, land, electricity, water, sea, and all what belongs to our life as Lebanese people, were bigger than being captured in a photo,” the man stresses, showing that every single photo was enough to expose the enemy’s brutality.

“On the patriotic level, the Lebanese photographers started observing and pursuing every massacre the ‘Israeli’ enemy committed against our people. This was a reason our photos reached international media outlets, having a strong influence that explained to the international public opinion this war, how it started and what is being committed [during it].”

He further elaborates, “During our coverage, six of my colleagues, and I, faced an intensive campaign by some sides that called us a ‘Hezbollah propaganda’, they started attacking us on the internet claiming that all of our photos are fabricated and fake."

"They called me the ‘king of toys’, claiming that I prepare my cameras, my lenses and equipment, and I prepare toys, then I reach the “Hezbollah” attacked site and throw the toys there and capture the scene claiming it is a residential area.”

In conclusion, this showed how much harmful the photos were for them “as they tend to claim that we were making up those scenes, adding some toys and children in our photos, to say that ‘Israel’ is building residential areas. But the truth is that we didn’t need anything [when capturing the scenes] because all the places we took photos of are residential. There might be a Hezbollah center in each place, but the entire neighborhoods were residential. All neighborhoods embraced a history, heritage and memories, and it is the same for all the destroyed apartments.”

The man recalls the scenes of photos of the Dahiyeh [Beirut’s southern suburb] describing that they appeared as if an earthquake hit the place. “The case is similar for Bint Jbeil and all other villages where we have passed. The ‘Israeli’ enemy had rancorously bombed Lebanon, sometimes just ‘to have fun’, or just to destroy the place.”

Unforgettable incidents, scenes from the war

Mr. Taher further stresses: “We were touched by every scene. We were all moved by what happened. But the moment I was moved the most was when colleague Layal Najib was martyred after the ‘Israeli’ warplanes bombed her car despite showing the ‘Press’ signal. She was targeted just like any other Lebanese national.”

Layal Najib, the martyr of photography who was killed in South Lebanon, is a symbol of all other martyrs who dies during this war, the man points out. “She is not different from them, but she is a photojournalist, and they [pretend] to talk about human rights and freedoms, Layal exposed the example of this enemy that doesn’t differentiate between civilians and journalists and that considers the whole place as a scorched-land.”

We were moved by many scenes of the martyrs, and the destruction… imagine that when you enter the Dahiyeh, you find all the places and buildings you know became rubble, completely damaged, he says.

“Every scene from the July war, just like all other wars, stops you at every detail, the lack of water, the lack of fuel, and the entire sufferings people have faced during the war…”

Speaking on behalf of the Lebanese photojournalists, Mr. Taher says: “We’ve taken pictures of all the ‘Israeli’ aggressions against Lebanon until the historic liberation day in 2000. Each one of us was touched by a picture he/she took at some place, but all of us were moved by the daily photographs we took which were related to the ‘Israeli’ enemy.”

Asked whether the photographers tended to hide certain scenes during the war, Mr. Aziz Taher explains that: “Most of the photos I took during the war were in the southern suburb. Then we started moving to the areas we could reach, to several regions in the south until we reached Bint Jbeil… During the war, we have witnessed many scenes especially those of the resistance fighters, but we absented them due to a patriotic sense…”

He justifies that by saying that “there was no interest to show from where the rocket was launched, we’ve seen that but we intended to absent those scenes. It was the same case regarding the photos of the resistance men we’ve seen when arriving at a certain village; we tried not to take any photo of their faces although we, as photographers, are curious to take photos of a rocket launcher or anything related to the resistance. However, we decided to hide them.”

“In this battle, you are not looking for a scoop, as you see all this suffering, you should show solidarity, at least by the photos you take, with the resistance men who are roaming between valleys, fields and villages to fight this enemy. Your duty is to hide their photos, not because they don’t deserve to be seen; they indeed deserve that their photos head all newspapers and media outlets, but being keen for their lives, and the continuation of the resistance work, we had this intention to hide their faces.”

In the world of photography and media, wars represent a subject that attracts the pros. It is a passion. Many photographers, during major events, stop their jobs, while many others become more induced. There are two types of motivation, the professional and the patriotic one, the man notes.

“When taking photos in times of war, especially during the July 2006 war, you gain a lot of experience as much as you expose your life to danger. Your life will daily be endangered because while taking photos at any place, the warplanes suddenly start operating or carry out strikes. A road may be blocked, a bridge may be bombed… it is a very tough experience the photographers have faced the like of which the Lebanese people did.”

Pointing out to covering wars in other places, Mr. Taher elaborates: “I covered the Kuwait war… Photography used to include more details, it was more difficult and more adventurous before mobile phones. Today, with the availability of mobile phones, the entire society takes photos. I wish I could have taken part in the Yemen war, also in Iraq… and any other place in the world where wars take place, but I didn’t get the opportunity to do that. There are photographers everywhere, but on the personal level, I wished I could have covered the events in Syria, Iraq, Yemen, Bosnia and Herzegovina, as well as all other places of war in our region and abroad.”

According to the Chinese proverb, a picture is worth a thousand words, he states.

“I say that every photo that needs an explanation is an unsuccessful one. The photo should express itself, this is what I teach my students at the Lebanese University. The photo speaks up for itself. The press photo is the most dangerous, most entertaining and most real. Hadn’t it expressed its idea to the people, it is definitely unsuccessful.”

The man notes that a picture is worth a thousand words when it is used properly and reflected honestly. “A photo records the memory of the people. Our photos are not only taken to be published. Sometimes we take photos that we don’t publish. They are intended to document the people’s collective memory, as I previously mentioned the Houla Massacre that was not documented with photos, leading to its absence from the people’s memories. Today, however, the July war or any other incident became tangible to the public through photos.”

A man with such a rich experience and history makes anyone realize that you can look at a picture for one second but think of it an entire life. This is the case of the July 2006 war. With the photos he and his colleagues have taken, they have bought the new generations, especially those who weren’t present at the time, return tickets to many moments otherwise gone. They have also commemorated history and taken part in the heroic duty of defending the nation.

From the July-August course of war and victory, by Taher Aziz's lens: Recorded Moments of War, Suffering, Resistance and Victroy