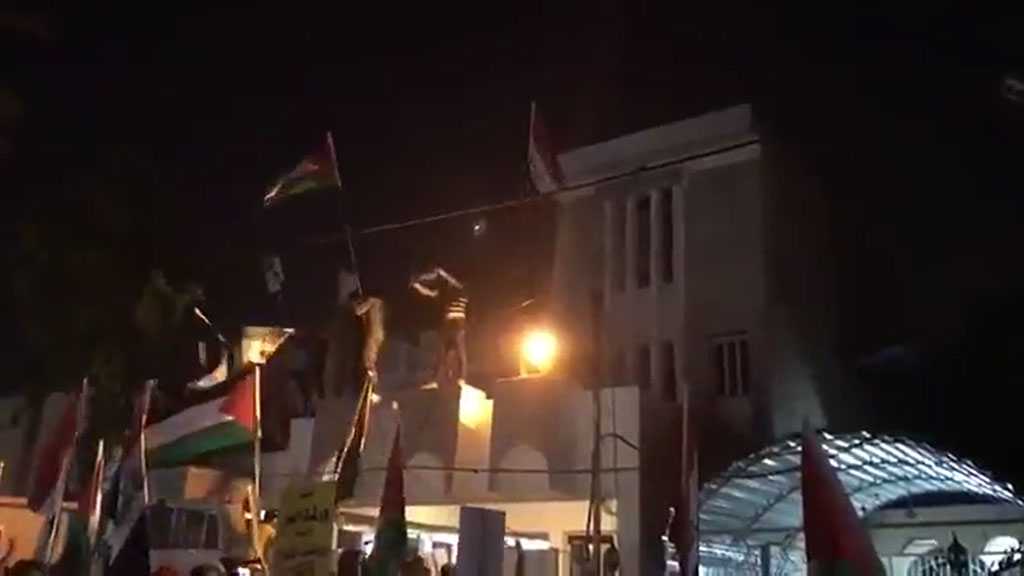 Scores of Iraqis stormed the Bahrain embassy in the capital city of Baghdad to protest Manama's decision to host a key summit where the US showcased its so-called deal of century to end Palestinian-‘Israeli’ conflict.

Videos posted on social media on Thursday showed dozens of people with Palestinian flags marching outside the Bahraini diplomatic mission while some of them tried to climb to the roof of an outbuilding.

Some reports also stated that the protesters had pulled down Bahrain's flag at the embassy.

"We took down the Bahraini flag to send a clear message to all those who participated in the Bahrain conference that we strongly reject normalizing relations with the Zionist occupiers and will never abandon our support of the Palestinians," said a protester. "We are ready to fight for this."

An Iraqi official speaking on condition of anonymity told media that the protesters stayed in the garden of the embassy complex and did not enter the offices inside the compound.

According to the official, Iraqi security forces tried to disperse the protest by opening fire in the air until reinforcements arrived to secure the Bahrain embassy, which is located in Baghdad’s western neighborhood of Mansour.

Following the protests, Bahrain recalled its ambassador to Iraq for consultations.

The protests indicate the growing outrage in the Muslim world against Bahrain's decision to host the Manama Workshop, an event that its organizers claim seeks to bring "peace" back to Palestine and ‘Israeli’-occupied territories through a deal masterminded by the Trump administration, in particular Jared Kushner, the US President's son-in-law.

The so-called "Peace to Prosperity" workshop opened in the Bahraini capital Manama on June 25 and ran through June 26 and sought to garner support for a $50 billion investment plan in Palestine.