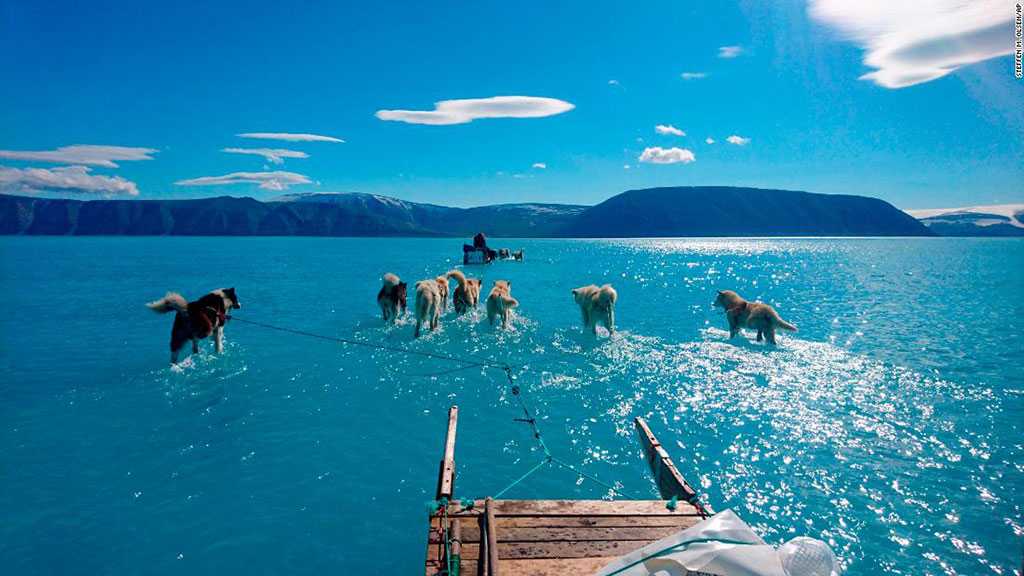 Steffen Olsen, a scientist with the Danish Meteorological Institute, was on a routine mission in northwest Greenland to retrieve oceanographic and weather monitoring tools placed by his colleagues on sea ice when he ran into a problem.

He couldn't see them -- the usually flat White Sea ice was covered in water, the result of flooding from Greenland's ice sheet, the second largest on the planet.

As Olsen said on Twitter, communities in Greenland -- mainly indigenous -- "rely on the sea ice for transport, hunting and fishing." They will be among the first affected by the melting of the ice sheet, but the repercussions will not remain limited to Greenland or even North America.

Greenland's "melt season" runs from June to August, with the bulk of melting occurring in July, the hottest month. But this year has already seen massive amounts of ice lost, with some 40% of Greenland experiencing melting on June 13 -- the day Olsen took his photo -- for a total melt of more than 2 billion tons of ice, according to recent estimations.

Scientists have been predicting a record year for melting on the Greenland ice sheet for months, and the amount of ice already being lost this early in the summer suggests they're right.

The effect is also cumulative -- the more ice lost early in the summer causes greater melting as the weeks go on. This is because white snow and ice reflect the sun's rays back into space, reducing the amount of heat absorbed and keeping the ice cold. The less ice there is, the less heat is reflected, and the more melting occurs.

Since 1972, ice loss from Greenland alone has added 13.7 millimeters (about half an inch) to the global sea level, a recent study estimates. The island's ice sheet is the leading source of water added to the ocean every year.

Just as an early melt in Greenland can cause more melting later in the year, the loss of ice can have an amplifying effect on global temperatures because less heat is reflected off the planet. That heat causes sea temperatures to rise, which then causes more ice to melt, causing a cycle that is only broken when winter arrives and the Arctic begins to freeze again.

But with winters becoming warmer and warmer as the global climate catastrophe continues, the risk is that one day the cycle doesn't stop or even slow, and instead of huskies in Greenland ankle deep in water, it'll be people in Manhattan. And that will only be the start of their problems.