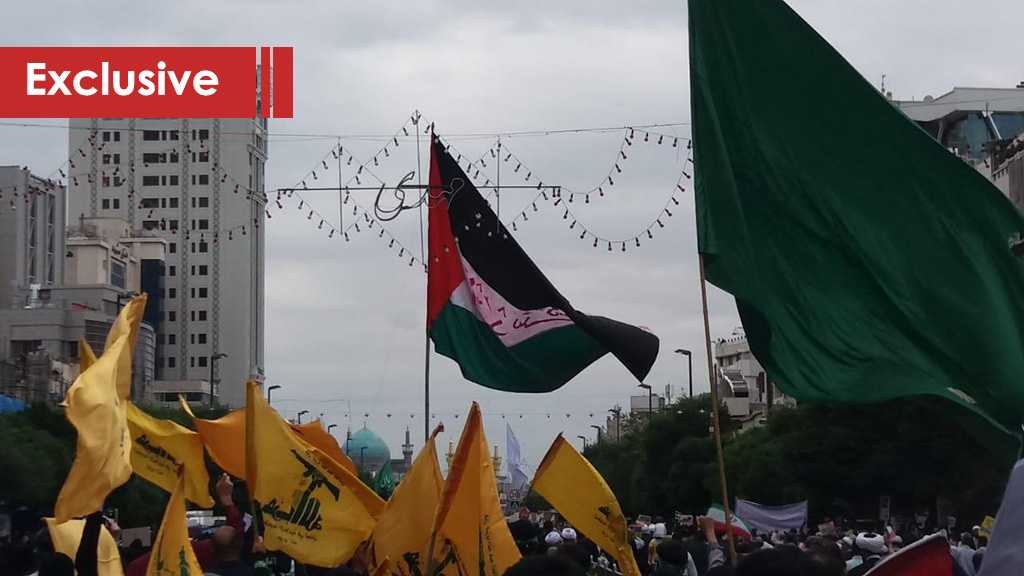 Tehran - On the last Friday of the Hijri month of Ramadan when Muslims perform fasting, people every year pour into the streets in many countries to commemorate al-Quds day, which was designated by the founder of the Islamic Revolution Imam Ruhollah Khomeini some four decades ago to raise the voice against supremacy and injustice.

In the Holy city of Mashhad, like other Iranian cities, people from all walks of life came to take part in the rallies.

Arash, with a group of university friends was at the rallies to express his support to not only the right to return, but also the right to fight oppression.

"I have been participating in the events of al-Quds day since young age. I think it is the least to do to express our rejection to 'Israel', the mother of all evil in the region. Every Muslim must know that this day stands not only for the liberation of Palestine, but for the liberation of all people who have dignity from any sort of apartheid or oppression."

Sarah, a petrol engineer, said "The Western world does not seem to understand that fighting oppression is in our blood. Everyone must know well that until our last breath we will keep fighting. We have already seen how the 'Israeli' unbeatable army was defeated badly by Lebanon's Hezbollah and Palestine's Hamas. We are human beings and have all the right to defend our existence and prevent any sort of injustice."

Sarah added "I tell the Zionists: Imagine these waves of people pouring into streets every year, if each one carries a bucket of water to throw at the 'Israeli' apartheid regime as Imam Khomeini says, the apartheid regime will drown and its inhumane practices would come to an end."

Hussein for his part, who came from Lebanon for religious pilgrimage told al-Ahed news that al-Quds day is a day to renew the promise to support the oppressed people wherever they are on this planet.

"We renew the promise to ourselves and our revered leaders, Sayed Hassan Nasrallah and Imam Khamenei that we will not sit and watch injustice and oppression being practiced against people wherever they are, be it in Palestine, Syria, Yemen, Lebanon or any other spot across the globe."

Young and old, women and men, all side by side took part in the rallies, carrying flags and placards that signal the eventual defeat of oppressors and of the 'Israeli' apartheid regime.

Mr. Mohammadi, a retired professor also told al-Ahed news "We will pray in the Aqsa mosque soon, and we will witness the days when all occupied lands will be liberated. We are a people who fear no one but God, and this fear of God is what makes us careful not to usurp anyone's right or cause harm to anyone. However, we will not remain silent and watch 'Israel', the US and all powers of hegemony do injustice."

After the rallies, people headed to the shrine of Imam Reza, the eighth infallible Imam of Shiite faith to perform their noon prayers.