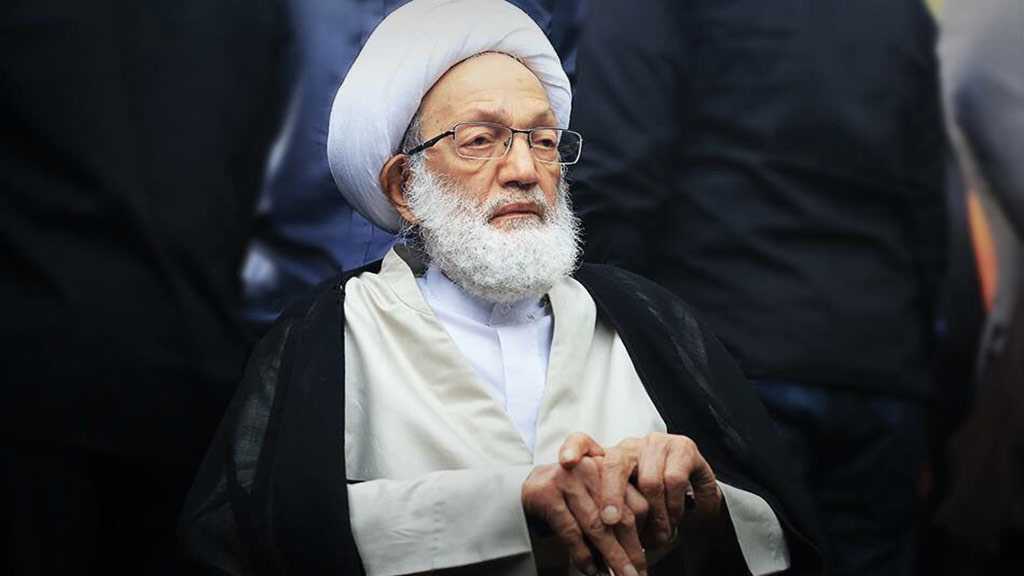 Bahrain’s highest religious authority, Ayatollah Sheikh Isa Ahmed Qassim, described the “deal of the century” as a crime that shames its collaborators and supporters.

In a statement on the US-sponsored economic workshop, which is meant to unveil the “deal of the century” and promote investment in the occupied territories, Ayatollah Qassim said that its actual parties “are Trump, ‘Israel’ and collaborators and implementers from Arab regimes. This cooperation explicitly leads the will of the nation. [But this nation’s] religion, dignity and honor refuses humiliation, to be crushed for the enemies and to be the tongue and sword against the brothers of religion, blood, land and history, which are the free people of Palestine, its Mujahideen and the honest, resisting, honorable people, in favor of ‘Israel’.”

Sheikh Qassim stressed that "the ‘deal of the century’ is a crime that shames its collaborators and supporters."

"Each has his fair share of shame, humiliation and disgrace depending on how much he contributes and opens the way for it,” he added. “The ‘deal of the century’ is but one of the crimes and conspiracies committed against the Palestinian cause, foiled by the will of the faith of the nation, the awareness of its people and the steadfastness and the ferocity of their resistance. This deal will only find absolute failure. It will only achieve shame and disgrace for those who are chasing after it.”

In his statement, Ayatollah Qassim said, "we know that it is America’s and ‘Israel’s’ deal on the one hand – they planned it, promoted it, and are serious about accelerating its implementation.”

“But where is the other party to this deal?" he wondered.

"Where are the Palestinians, since they are the first to be concerned with the cause and the land that the deal revolves around? The battle has devoured their souls and made their lives extremely difficult. They see that their fate is linked to it,” he added.

"They reject the deal, and they disown those who are working to implement it, facilitate the way for it, and surpass their will and their position against them," Sheikh Qassim stressed.

The cleric asserted that "the opinion of the Arab and Islamic nation is rejecting, condemning and confronting all those who raise their voice for this deal. Both nations will rule it [the deal] as an unjust liquidation of the Palestinian cause and a serious conspiracy against the earth, man, sanctities, the present and the future.”