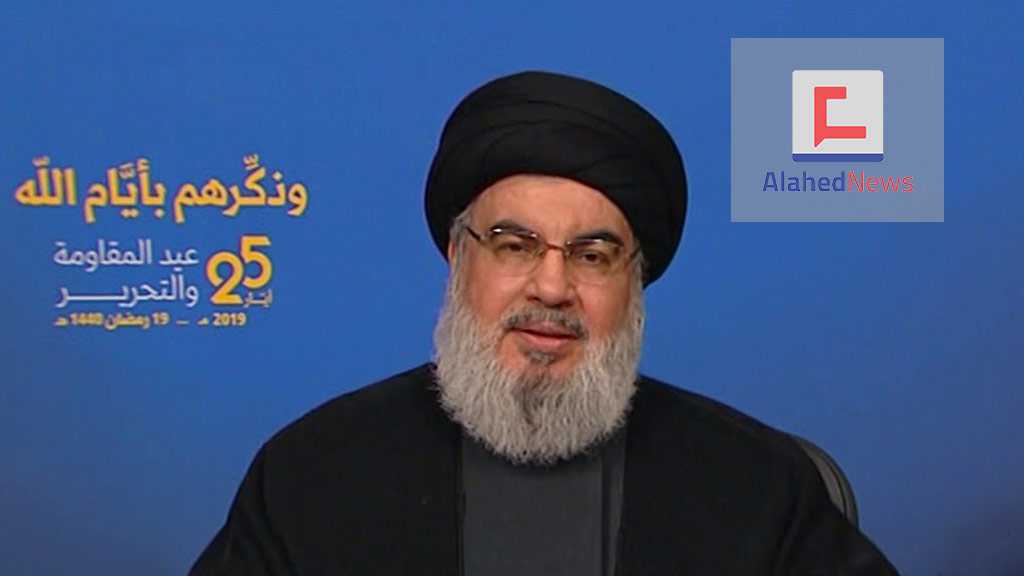 Hezbollah Secretary General His Eminence Sayyed Nasrallah delivered on Saturday a speech in which he tackled various topics.

In a televised speech on the Liberation and Resistance Day, Sayyed Nasrallah called for a huge participation in Al-Quds Day next Friday.

“This year, participating in Al-Quds Day is very important because the Palestinian cause is facing the biggest conspiracy,” he added, pointing out that “The title of Al-Quds Day this year is to confront the ‘Deal of Century’.”

Meanwhile, His Eminence hailed the fact that there exists an overwhelming Palestinian rejection and a firm stance on boycotting the US economic conference to be held in Bahrain.

He further praised the position of the Bahraini scholars, people and political forces that expressed their rejection that Manama becomes a land that embraces the first step of the ‘Deal of the century’.”

In addition, Sayyed Nasrallah warned that the US initiative is aimed at liquidating the Palestinian cause.

“The conflicts in the Gulf as well as the threats facing Iran are related to the ‘Deal of the Century’,” he revealed.

On the title of the speech, Sayyed Nasrallah confirmed that “what happened on May 25, 2000 had very important consequences.”

“The “Israeli” enemy is seriously and around the clock dealing with the fact that there is a real force the exists in Lebanon,” he added, thanking “all those who offered sacrifices until the liberation was achieved.”

On the same issue, His Eminence underscored that “Lebanon is no longer seen as weak but as strong.”

““Israel” and the US recognize Lebanon’s power and are plotting to get rid of it,” he stated.

In parallel, His Eminence underscored that “the US would have offered southern Lebanon to “Israel” if Hezbollah did not exist.”

“Lebanon is not in a position of weakness. We are standing up for our rights concerning Shebaa Farms, Kfarchouba village as well as the northern section of Ghajar [village],” he went on to say.

Moreover, the Resistance Leader recalled that “After liberation, the enemy and its allies are seeking to destroy Hezbollah, which was immune to all conspiracies.”

““Israelis” describe Hezbollah as a strategic threat to its entity in an attempt to mobilize support and provoke the international community against it.”

“The statement of the Lebanese President and the army’s leadership on the adherence to the liberation of the Shabaa farms was strong,” Sayyed Nasrallah stated, reiterating Hezbollah’s  support for the state and stand with it regarding the demarcation of borders and adherence to all rights in land and water.

He also declared that “Lebanon can stop the Zionist “Israeli” entity from plundering its oil and gas reserves.”

“Hezbollah is part of the deterrent force and has prevented the Israeli enemy from achieving its ambitions,” His Eminence remarked, pointing out that “with the strength of the army, the people and the resistance, we have been able to keep Lebanon strong in the face of our enemy.”

Sayyed Nasrallah also urged the Lebanese to realize their strength in preserving the sovereignty, security, present and future of Lebanon.”

As Hezbollah Leader announced His party’s adherence to Lebanon’s oil rights,  He unveiled that he is optimistic about the possibility of achieving a great victory in this issue.

On another level, Sayyed Nasrallah warned that “Bahrain’s conference may open the door to the settlement of the Palestinians in Lebanon and other countries.”

“The Lebanese agree on rejecting the settlement of Palestinians in Lebanon,” he said, calling “for a quick meeting between Lebanese and Palestinian officials to seriously discuss and develop a plan to confront the threat of resettlement.”

On another level, Sayyed Nasrallah confirmed that “the Lebanese agree on the importance of the return of Syrian refugees to their country.”

“The Lebanese suffer from  the economic and social consequences of the displacement of Syrian refugees,” he said, pointing out that “the US does not want the displaced Syrians to return to their country before the Syrian presidential elections.”

According to His Eminence, “One of the reasons and forms of preventing the Syrians from returning to their country is by encouraging them to stay in Lebanon.”

“There are allegations to intimidate the Syrians from returning to their country,” he said, noting that “the Lebanese agree on the principle of returning the Syrian refuges but disagree on the means to apply it.”

Stressing that “Lebanon is able to face any “Israeli” attempt to take our oil resources,” Sayyed Nasrallah  unveiled that some “Gulf states are pressuring Lebanon to avert the return process through encouraging the Syrian refugees to overstay and intimidating them of return to their country.”

On the internal front, Sayyed Nasrallah recalled that “from the beginning, Hezbollah stressed that the file of the battle of corruption needs patience.”

His Eminence also mentioned that there exists “files that will be revealed soon and we will submit them to the judiciary after completing the budget.”

“We do not want anyone to say that Hezbollah has prevented waste and corruption, but we must reach the goal of ending them,” he said, noting that “unfortunately, there are taxes and fees on the poor and low income grou