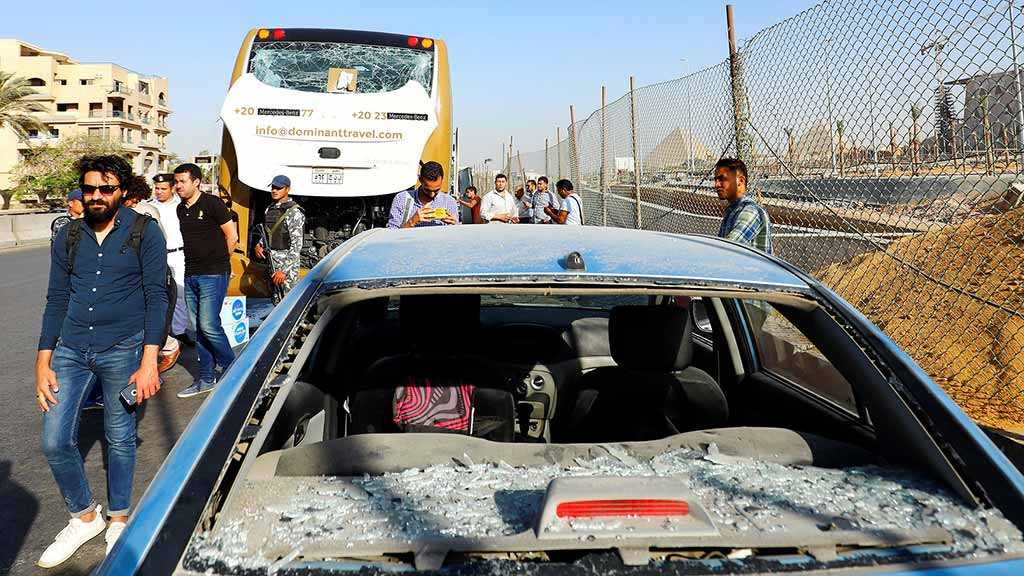 A bomb blast hit a tourist bus near Egypt's famed Giza pyramids on Sunday, wounding at least 17 people, including South Africans, in the latest blow to the country's tourism industry.

The roadside bomb went off as the bus was being driven in Giza, also causing injuries to Egyptians in a nearby car, medical and security sources said.

There were no deaths reported.

"A device exploded and smashed the windows of a bus carrying 25 people from South Africa and a private car carrying four Egyptians," the security source said.

Video footage captured by AFP showed the bus and car with broken windows on the side of the road.

According to the security source, the wounded were being treated for scratches caused by the broken glass.

Ndivhuwo Mabaya, spokesman for South Africa's department of international relations, told AFP that "there might be South Africans involved" but declined to give any figures.

Sunday's incident comes after three Vietnamese holidaymakers and their Egyptian guide were killed when a roadside bomb hit their bus as it travelled near the Giza pyramids outside Cairo in December.

It also comes just little more than a month before the African Cup of Nations hosted by Egypt is to kick off.

Egypt has been battling an insurgency that surged especially in the turbulent North Sinai region following the 2013 military ouster of Muslim Brotherhood president Mohamed Morsi, who was replaced by former army general Abdel Fattah al-Sisi.

In February 2018, the army launched a nationwide operation against militants, focusing mainly on the North Sinai region.

Some 650 militants and around 45 soldiers have been killed since the start of the offensive, according to separate statements by the armed forces.

Since first being elected in 2014, al-Sisi has presented himself as a bulwark against terrorism, promising stability and increased security.

Recently, the country's vital tourism industry has started to slowly rebound after suffering strong blows due to deadly attacks targeting tourists following the turmoil of the 2011 uprising that toppled longtime ruler Hosni Mubarak.

Figures by the official statistics agency showed that tourist arrivals reached 8.3 million in 2017, compared with 5.3 million the previous year.

Authorities have gone at great lengths to lure tourists back, touting a series of archaeological finds and a new museum next to the pyramids, as well as enhanced security at airports and around ancient sites.

But that figure was still far short of the record influx of 2010 when more than 14 million visitors flocked to see the country's sites.